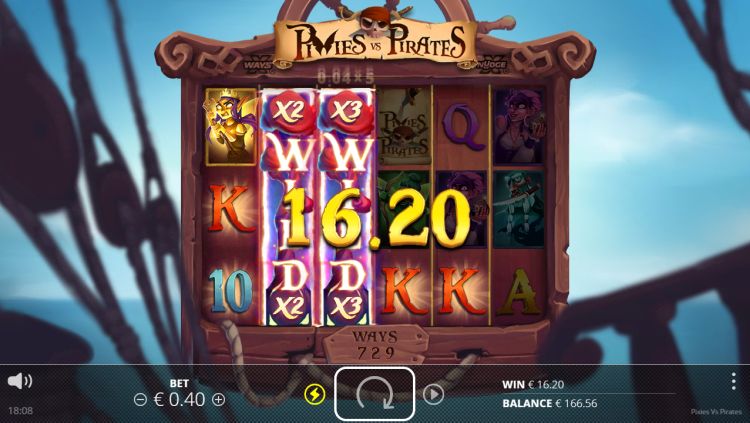 Pixies vs Pirates is a fun six-reel game with reels that can have up to six symbols on each, which means you can get up to 11,664 ways to win. There is a free spins round that can easily be re-triggered if you quess the side right, as well as two special symbols that make your base game more enjoyable and more rewarding.

Best Casinos to Play Pixies vs Pirates for Real Money :

Pixies vs Pirates is a game that’s played on a huge six-reel board, with up to 11,664 ways to win, so in essence it’s a Megaways game but Nolimit City can’t call it that. At the very minimum, the game will have 18 symbols on a 6×3 board, in which case there are 729 ways to win, and unlike many Megaways games, in Pixies vs Pirates it is rare to see additional symbols on the screen. Bet per spin can range from €0.20 to €100.

The high-win symbols aren’t better when it comes to three-of-a-kind wins as these will award 0.15x or 0.20x prizes, and the maximum prize in the paytable is only 3x your bet. This is so because Pixies vs Pirates is a game which relies heavily on multiple winning paylines, so you’ll often get serious wins – it’s just that you can’t get them on a single payline.

xNudge Wild is a symbol you’ll hope to see often, as every time you do it will nudge to be fully visible as a 3×1 symbol, and not only that, but for every step the xNudge Wild nudges, the Wild multiplier will increase by x1. This symbol can only land on the middle four reels.

xWays Mystery Chest can also land on the middle four reels, and when it does it will reveal up to four of the same symbol, and may expand its reel up to 6 symbols high and potentially give you the desired 11,664 ways to win. 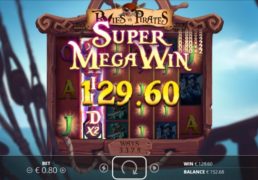 Before you start the feature you must choose a side, Pixie Queen or Pirate Captain, and during the feature these symbols will be collected. Battle Rounds will be re-triggered if you’ve chosen the side with a higher number of collected symbols! You also win in case of tie, and this is an incredible proposal that makes this game a must-play.

Theoretical return to player (RTP) of this slot game is 95.91%, which is good enough even if the starting number isn’t 96, but it’s close enough. This is a game worth playing for real money, as the potential of big wins from those 11,664 ways to win, Wild multipliers and Battle Rounds re-triggers is immense. Variance seems to be medium, perhaps a bit high, as this is a deceptively fun slot that’s actually a serious one.

Pixies vs Pirates may seem like a cartoonish slot game that’s meant to be played for fun only, but it has the potential to deliver huge prizes, especially during the Battle Rounds Free Spins feature, though in the base game you can benefit from xNudge Wilds and xWays Mystery Chests. This is a quality slot game that is worth playing for real money and worth tracking down – you’ll find it in casinos that have Nolimit City games.

Pixies vs Pirates is a fun six-reel game with reels that can have up to six symbols on each, which means you can get up to 11,664 ways to win. There is a free spins round that can easily be re-triggered if you quess the side right, as well as two special symbols that make your base game more enjoyable and more rewarding.

Hurray! There is a competition going between users of our site!
You have to do nothing, but browse out site, and win a daily prize. Click here to read more.
You current ranking:
Time Left: 4h 34m 36s