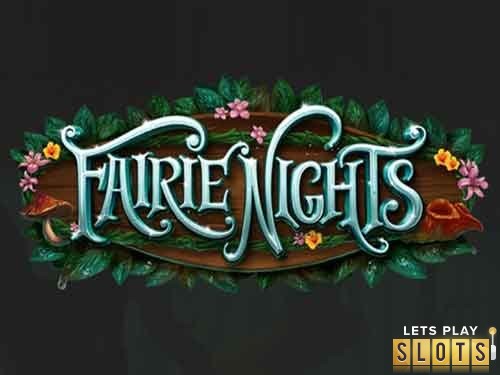 You’ll be away with the fairies when playing this 1×2 Gaming slot. That’s certainly not a bad thing though, as Fairie Nights includes a freespins round, a jackpot of 25,000 coins and expanding wild icons, too!

I love a slot game that takes you into a different world. A world of fantasy and make-believe. This online offering from 1×2 Gaming aims to do exactly that, slotting you in to the middle of the woods at night where you can watch the fairies come to life. This way, you’ll get to see what real Fairie Nights are all about. But it’s not just the theme of the game and its design that stand out. The slot has much more to offer. 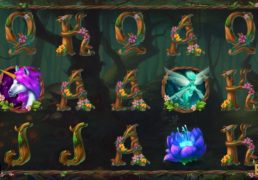 The game does fall in line with what one expects from a video slot layout – five reels and three rows in total. Across this layout, you’ll have a total of 25 pay lines upon which you can bet. And speaking of the bets that you can place, the minimum coin bet stands at €0.25 per spin, while the maximum overall wager stands at €100. This can easily be adjusted from the relevant menu.

On the reels of the slot is where you will get to see its icons. I was quite impressed to see the standard playing card letters be transformed into a bit more of a thematic offering, appearing in tree bark form with flowers growing around them. Additional symbols include the blue woodland flower, the pink glowing mushroom and the butterfly, which can pay out up to 25 times your bet. There’s also a dwarf who pays out up to 30 times your wager, and the blue flying fairy, and the unicorn – the game’s highest paying standard icon. 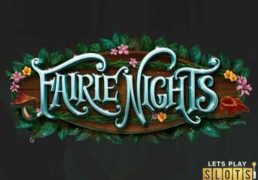 I’m was also happy to discover that Fairie Nights has a couple of special features to enjoy, too. First of all, there’s the inclusion of two different wood scenes – the day and the night. During daytime play, the blonde fairy and the tree with a face appear. The former can trigger the freespins round whenever three, four or five appear on the reels. The latter is able to operate as a wild symbol, substituting for all other standard icons. He will also expand to cover the entire reel.

On the other hand, there’s a blue wisp that appears during the night time, which is the freespins round. You’ll be rewarded with seven, nine or 11 of these, depending upon how many of the blonde scattered fairy icon show up. This operates as the freespins round’s wild icon and it’s a sticky wild to boot. The dark-haired dairy appears at night time too, and she will multiply your winnings by two whenever she shows up.

I like the Fairie Nights slot game. It’s got a theme that many developers have utilised in games, but it does things a little bit differently. I appreciate the two different wood scenes – after all, it’s always nice to see freespins. I would have also liked a bit of a bonus feature alongside, but as it stands, this 1×2 Gaming offering is a decent slot to play.

You’ll be away with the fairies when playing this 1×2 Gaming slot. That’s certainly not a bad thing though, as Fairie Nights includes a freespins round, a jackpot of 25,000 coins and expanding wild icons, too!

Hurray! There is a competition going between users of our site!
You have to do nothing, but browse out site, and win a daily prize. Click here to read more.
You current ranking:
Time Left: 6h 9m 14s