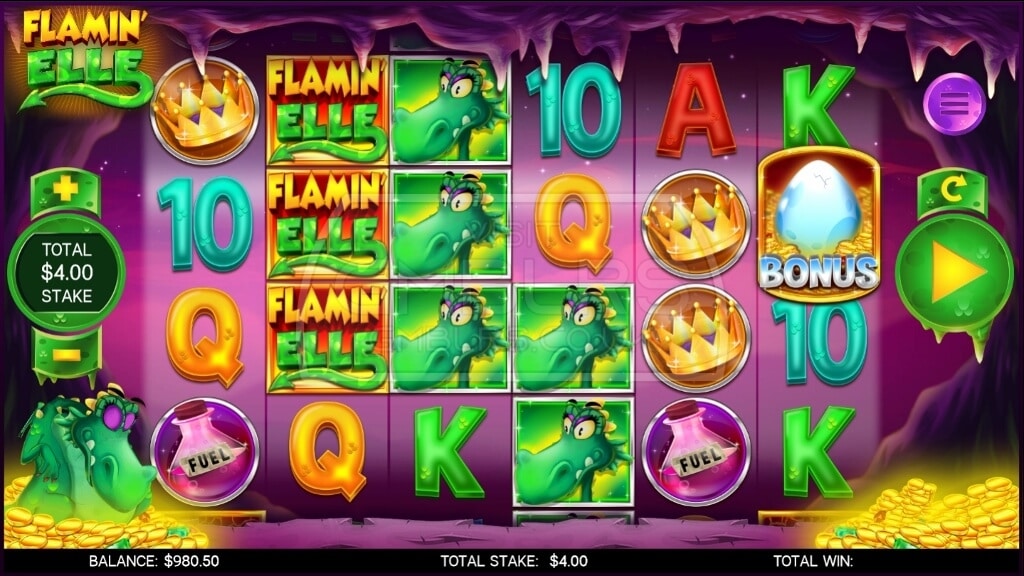 Flamin’ Elle is a Core Gaming slot released in May 2019 that is actually a classic slot, but with Elle the Dragon as the main character that produces Flamin’ Wilds. The game is all about Wilds, and you’ll see tons of them, which will help you make money from a good paytable. The theme and graphics are simply superb.

Flamin’ Elle is played on a very large 6×4 board with 40 fixed paylines, and you only have to choose your bet per spin, which can range from €0.40 to €100. While it’s a bit expensive to play this game since the minimum bet is a bit high, it’s worth it, as the game pays well and is offering a very enjoyable and profitable experience. It’s fun, too, as you got four bonus features to play. 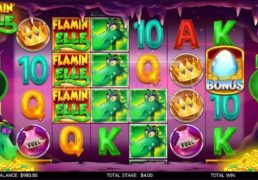 The paytable consists of four high-win symbols and five card symbols but two of them, Ace and King, pay rather well, 5x your total bet for six-of-a-kind and might as well belong to the three high-win symbols. Elle the Dragon is the best-paying normal symbol in the game with a 12.5x prize, the Crown pays 10x, and Fuel pays 7.5x. Wild and Game Logo pay identical prizes, up to 25x your bet. It’s a decent paytable, and the maximum possible win on a single spin is 500x, which you’ll get for a full board of Elle symbols. During the game, Elle that sits beside your reels can reveal a number of Flamin’ Wilds on the board.

Theoretical return to player (RTP) of this slot game is 95.30%, which is rather low and is in the classic slot game territory, but what matters here is that the free spins game is so rewarding that you’ll definitely make a lot of money when you trigger it. If you trigger it early, you can walk away a winner. Variance seems to be low, perhaps medium, as the game doesn’t leave you stranded without big wins for too long, it makes sure you get paid often.

Flamin’ Elle is a very good slot game and the RTP value doesn’t do it justice, it just feels much more rewarding than that as big wins are always just around the corner. That’s why you should play this excellent game for real money, as it can really pay well. This slot game will be liked the most by classic slot players, but it’s also good for players who enjoy modern slots, as Flamin’ Elle is actually a perfect mix between the two genres. Find a good online casino with Core Gaming slots and play Flamin’ Elle – it’s good for you.

Flamin’ Elle is a Core Gaming slot released in May 2019 that is actually a classic slot, but with Elle the Dragon as the main character that produces Flamin’ Wilds. The game is all about Wilds, and you’ll see tons of them, which will help you make money from a good paytable. The theme and graphics are simply superb.

Hurray! There is a competition going between users of our site!
You have to do nothing, but browse out site, and win a daily prize. Click here to read more.
You current ranking:
Time Left: 2h 58m 33s