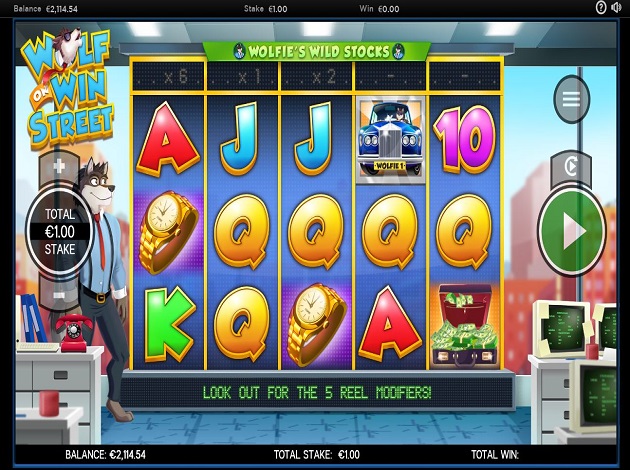 Wolf on Win Street is a slot game by Core Gaming released in 2018 that offers ton of interesting features such as Crazy Stocks, Market Mover, Market Crash, Bonus Chance and Bonus Respin! 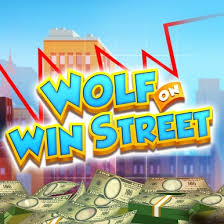 I have played this slot game since it came out in October 2018, so I can give a detailed opinion about its pros and cons. It’s a complex game with tons of bonus features that keep the game interesting at all times.

Theoretical return to player (RTP) of Wolf on Win Street is only 95.58%, which is a bit low for today’s standards as most slots have at least 96%. However, it’s not such a huge drop to 95.58% and it’s up to each player to decide if this slot is worth it. I have played it for a while and I think it is, because the bonus features make this game worth playing, they can bring big wins anytime. This is one of more fun 2018 releases, the game can just keep giving and giving. After several dozen spins you won’t care about theoretical payout as in practice you’ll have lots of cash.

The game starts on a 5×3 board with 20 mandatory paylines, but this isn’t your ordinary slot game. The main game is just a starting point for everything else, and there’s a ton of features here. Crazy Stocks, Market Mover, Market Crash, Bonus Chance and Bonus Respin are the five random features that can get activated during the main game. Market Mover will put some Wilds on your reels, and during my playing session I got six Wilds and won 21x my bet on that single spin. You can get even more Wilds, say, nine or ten.

Also, above each of the five reels in the main game there is a possible prize. It can range from 1x to 10x your bet, or it can hold a Bonus Game, and the way you trigger the prize is by landing a Wild on that reel. Wilds aren’t that common so this doesn’t happen very frequently.

The paytable is decent, it consists of five card symbols which pay 5x your bet at best, and four main symbols which pay between 10x and 25x your bet for five-of-a-kind. The two types of Wilds also pay 25x. This is a good paytable that can produce good wins often, but the three- and four-of-a-kind aren’t worth much. 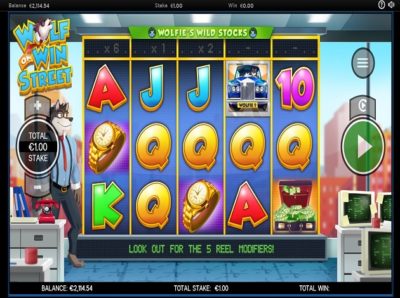 You need to land at least three Scatters to trigger the bonus game, and you’ll get 6, 7 or 8 free spins which are very powerful. Before the game, you’ll be handed a check for 5x, 7x or 10x your bet, depending on the number of triggering Scatters.

Any Wilds that land during the free spins feature will expand to fill the entire reel and will take you to Wolfie Wilds Trading Offer. That means you’ll get to either keep the expanded Wild on the reel for the remaining free spins, and the location of the Wild Reel and the number of remaining spins will influence your decision, or you’ll sell the Wild Reel for an offered amount of cash. It takes some trading skills to play this game! The free spins feature in Wolf on Wolf Street can be very rewarding, especially if you trigger it with a large bet per spin or/and if you trigger it with four or five Scatters.

A good thing about this game is that it can enter a series of bonus features that get triggered one after another and throw a lot of cash your way. If that happens during the time when your bet per spin is high, you’ll walk away a winner. Wolf on Win Street is a great slot game and you should definitely play it. Thumbs up for the small developer Core Gaming.

Wolf on Win Street is a slot game by Core Gaming released in 2018 that offers ton of interesting features such as Crazy Stocks, Market Mover, Market Crash, Bonus Chance and Bonus Respin!

Hurray! There is a competition going between users of our site!
You have to do nothing, but browse out site, and win a daily prize. Click here to read more.
You current ranking:
Time Left: 9h 27m 44s
Gambling is for 18+ though some countries may have other restrictions...Remember you should always Gamble Responsibly
We use cookies to ensure that we give you the best experience on our website. If you continue to use this site you agree to allow us to use cookies, in accordance with our Terms & Conditions.Agree & Close