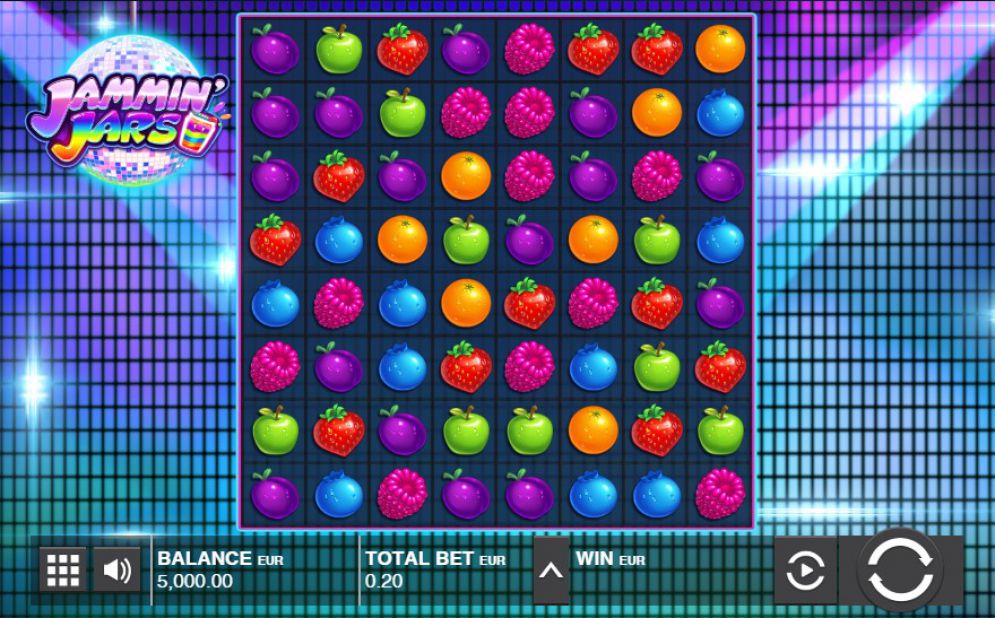 Jammin’ Jars is a game that’s played on a 8×8 board and pays when you form clusters. The game is well balanced and offers clusters of 25+ symbols as well as free spins, sticky Wilds, re-spins and dynamic win multipliers! 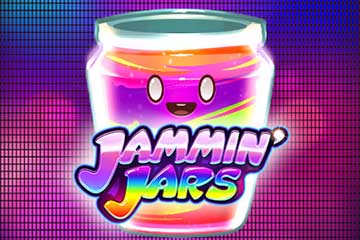 Jammin’ Jars is an October 2018 release by Push Gaming, and I have played it immediately after it was released, so let me give you my honest opinion about this slot. It’s a cluster pays kind of slot game that’s played on a huge 8×8 board and you can get clusters of 25 or more of the same symbol. This is rare however, and you do need a big cluster to get a decent win. The game pays already for a cluster of 5 symbols, but these prizes are always smaller than your bet. Bets per spin can range between €0.20 and €100, and there are no paylines in this game so the wins are displayed in real money and not in coins.

Theoretical return to player (RTP) is 96.80%, which is excellent, and very few slot games have that kind of payout, especially games of this type which usually keep things at a much lower level. This is a potentially very rewarding game, although at first it doesn’t look like that since the win frequency is quite low. The game doesn’t pay often, which means getting those big clusters will be even more rare, and you’ll rarely see the dynamic win multiplier go up to x5, but it’s not that the game doesn’t pay – you just need a lot of patience and longer playing sessions to play Jammin’ Jars. 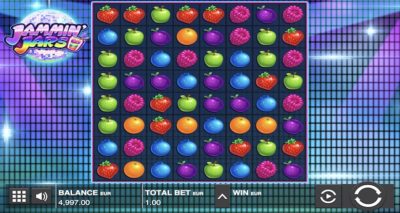 The paytable consists of only six symbols, and they differ a lot from each other. The Blueberry is absolutely worthless, and Plum, Apple and Raspberry are the three medium-value symbols which pay well for a cluster of 15+ symbols. Orange pays well already for a cluster of 10 or so, and peaks with a 62.50x prize for a cluster of 25+, and Strawberry is by far the best symbol in the game, and the prize is 100x for a cluster of 25 symbols or more, and already a cluster of 5 will get you your stake back. There is a Jam Jar symbol that can help you get those clusters, as it’s a Wild that substitutes for all other symbols, and it has a win multiplier, and it’s also a Scatter.

If a Jam Jar symbol contributes to a cluster win, the symbol will then move randomly to an adjacent vacant position before the collapse occurs. Every time the Jam Jar symbol does that, the win multiplier will increase by x1, up to a maximum of x5. 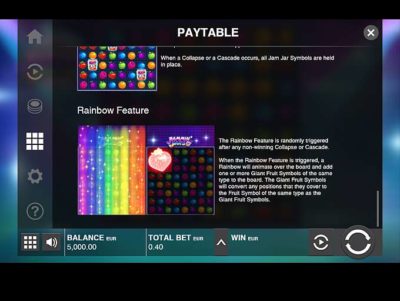 When you land three or more Scatters on your screen, the Free Games Feature is triggered. If a Jam Jar Symbol contributes to the Cluster Win, the symbol will randomly move to an adjacent vacant position before the following collapse occurs. This also happens before a cascade occurs. When a collapse or a cascade occur, all Jam Jar symbols are held in place. This means that the feature can be very rewarding.

Rainbow Feature is randomly triggered after non-winning collapse or cascade, and you’ll see a rainbow animation that will bring one or more Giant Fruit symbols of the same type to the board, which will always result in at least one decent win, perhaps more than that.

Jammin’ Jars will be loved by fans of Candy Crush clones that are played on a large board on which clusters bring wins and then explode. This game is one of the better titles in the genre, and the Jam Jar is a very powerful symbol that makes all the difference in this slot game and also makes the game much more recognizable than other similar titles. If you’re a fan of these, play Jammin’ Jars, it’s one of the best slot games in this genre.

Jammin’ Jars is a game that’s played on a 8×8 board and pays when you form clusters. The game is well balanced and offers clusters of 25+ symbols as well as free spins, sticky Wilds, re-spins and dynamic win multipliers!

Hurray! There is a competition going between users of our site!
You have to do nothing, but browse out site, and win a daily prize. Click here to read more.
You current ranking:
Time Left: 11h 11m 6s
Gambling is for 18+ though some countries may have other restrictions...Remember you should always Gamble Responsibly
We use cookies to ensure that we give you the best experience on our website. If you continue to use this site you agree to allow us to use cookies, in accordance with our Terms & Conditions.Agree & Close