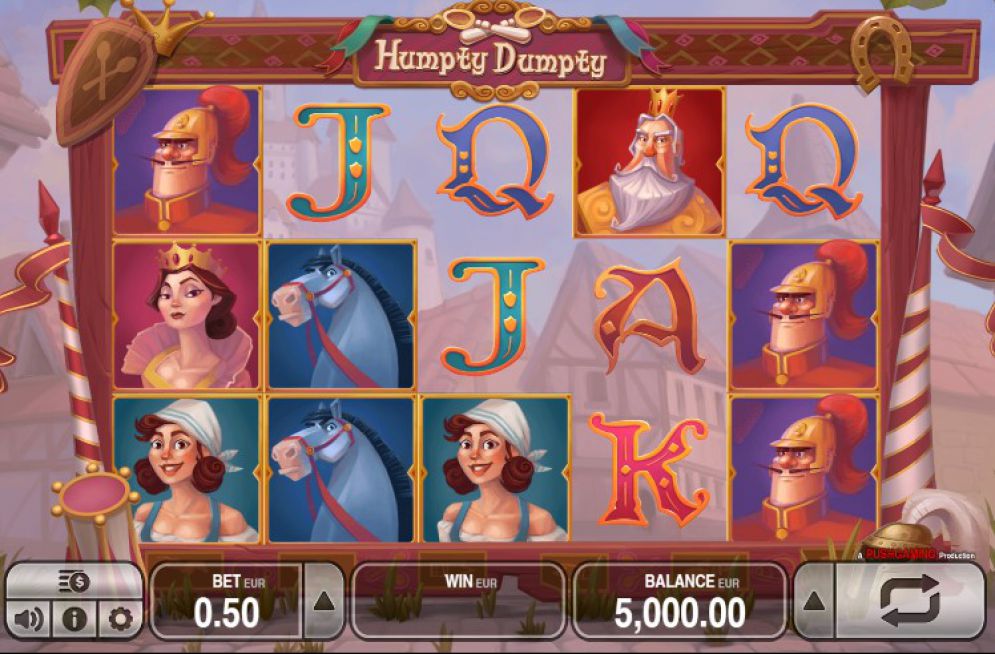 Humpty Dumpty is an innovative Push Gaming slot with a fantastic theme, and you’ll get re-spins, expanded locked Wilds, and Humpty Dumpty on the middle reel will trigger the free spins game! 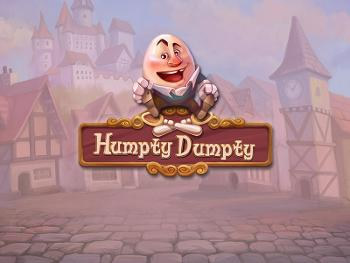 I’ve played Humpty Dumpty for a few hours in order to be able to write a detailed review for you, and I quite liked this game. The theme is very enjoyable, the game pays well, and the bonus features are fun and rewarding. All this makes Humpty Dumpty one of the best Push Gaming slots, so let me give you a detailed review of this title.

Theoretical return to player (RTP) of Humpty Dumpty is 96.47%, which is actually great because it’s combined with a low variance, and you can play this game for a long time without your balance going too deep into negative. This is one of more enjoyable slots, a game that’s very easy to play, yet it does provide a chance of winning a decent sum of money. The main game can produce wins that are good enough, and the win frequency is low so most spins will be non-winning ones.

The theme is excellent, as it’s done in Disney style, with soft pastel colors, and it’s a perfect match for what is essentially a character from a children’s tale. This slot game brings Humpty Dumpty to life more than any other medium did. 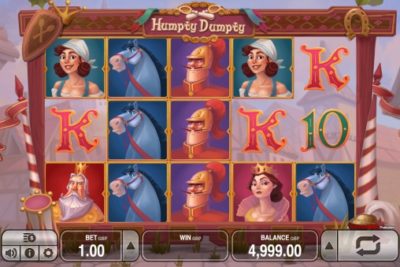 Humpty Dumpty is played on a 5×3 board and the game has 25 mandatory paylines, with a €0.25 minimum bet per spin. The maximum is €100. Interestingly, the game pays all line wins, so if you land five-of-a-kind you’ll also get money for four-of-a-kind and three-of-a-kind, and these prizes are generous, too. For example, the Maid will pay 6x for five-of-a-kind and then 3x for four-of-a-kind and 1.40x for three-of-a-kind. It adds up to 10.40x. This makes the paytable very good, and the best prize is 20x, or 32x when four- and three-of-a-kind wins are included. There are five main symbols and five card symbols, and actually almost the entire paytable pays well, with the exception of two lowest card symbols which are worthless.

The free spins game is triggered when you land only one Scatter, Humpty Dumpty, and he must fill the entire middle reel. When that happens, you get 6 free spins. During the feature, Heart symbol is collectable, and it appears on reels 2, 3 and 4. When three Hearts are collected from the same reel, that reel will be filled with Wild symbols and locked in place for the remainder of the free spins feature. This is a race with time, as you got only 6 free spins and you need to collect 3 Hearts on the same reel as quickly as possible in order to benefit the most from the remaining spins. This means the free spins game has high variance, as you won’t manage to get a Wild reel every time, and getting all three will be even more rare – but the wins will be incredible if you do manage to do that,

Humpty Dumpty is a fun game that does things a bit differently, and this is especially true for the free spins game which is triggered in an innovative way and which produces Wild reels in an innovative way as well. The theme of the game is very well made, and in general, this is one fantastic slot game by Push Gaming. It will be fancied the most by fans of fairytale slots, but actually should be played by everyone who wants to play a quality slot game that plays and pays well.

Humpty Dumpty is an innovative Push Gaming slot with a fantastic theme, and you’ll get re-spins, expanded locked Wilds, and Humpty Dumpty on the middle reel will trigger the free spins game!

Hurray! There is a competition going between users of our site!
You have to do nothing, but browse out site, and win a daily prize. Click here to read more.
You current ranking:
Time Left: 3h 42m 11s
Gambling is for 18+ though some countries may have other restrictions...Remember you should always Gamble Responsibly
We use cookies to ensure that we give you the best experience on our website. If you continue to use this site you agree to allow us to use cookies, in accordance with our Terms & Conditions.Agree & Close