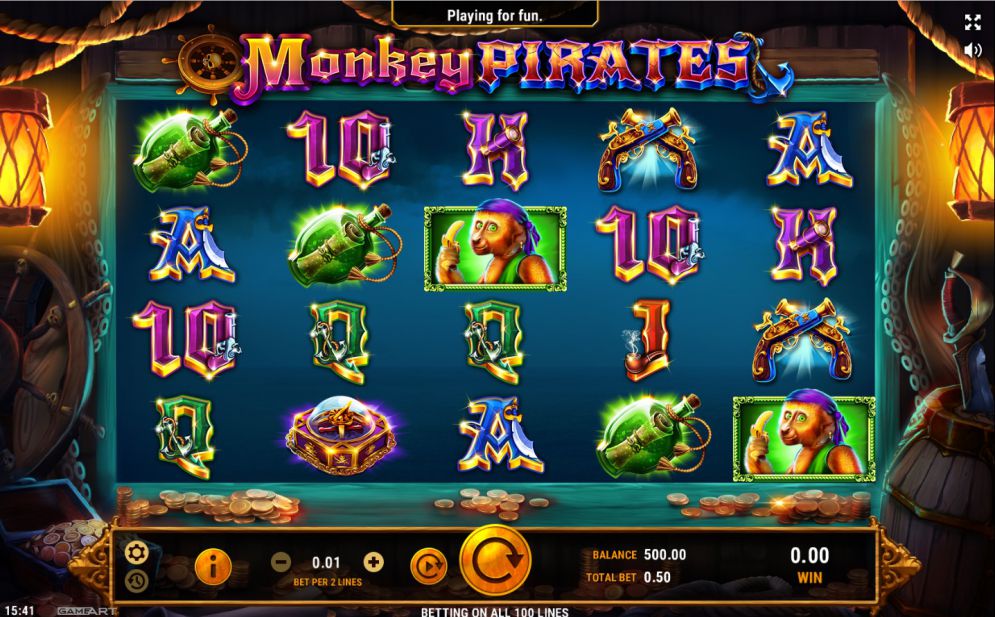 Monkey Pirate is a fun GameArt slot game with good graphics and two excellent bonus features, the free spins with win multipliers, and the Walking Wilds feature with free re-spins in the base game. Monkey Pirate has 100 fixed paylines.

Monkey Pirates is played on a standard 5×3 board and there are 100 fixed paylines. You pay 0.01 per 2 lines, so the minimum bet per spin is €0.50 while the maximum possible bet in this game is €50 per spin. The paytable prizes update automatically as you update the bet per payline that then updates the total bet, so the game is easy to set up. 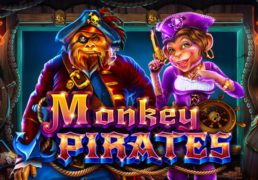 The game’s theme obviously draws heavily on the Monkey Island series of computer games by LucasArts, and those who haven’t played those games will be pleasantly surprised by the quality of the theme as they’ll think the idea to put monkeys and pirates together is a new one.

The theree medium-value symbols with Pirate stuff can pay decent prizes up to 2.50x your bet, and the five card symbols are worthless whichever way you look at it. In this game, you either need a single five-of-a-kind win or many paylines worth of smaller winning combinations. Unsurprisingly, since the paytable is somewhat limited, this is a game that helps you win more with bonus features. 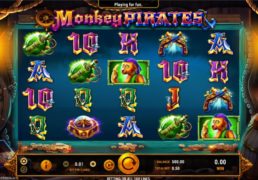 Every time a Wild lands on the reels – any reel but the first one –  it will trigger a Walking Wild feature, during which a Wild symbol will move one reel to the left with a free re-spin. This feature only triggers in the base game and it will usually produce some nice wins, especially as the re-spins are free.

The main bonus feature is the free spins game, and the number of Scatters determines how many Islands – another obvious reference to Monkey Island games – you get to pick. Three, four or five Scatters will let you pick 4, 5 or 6 Islands out of 19 on the screen. You can win a coin prize, a win multiplier, additional free spins, and some Wild reels.

Theoretical return to player (RTP) information for this game hasn’t been released publicly, but it is known that GameArt usually produce slots with RTP around 96% and aren’t one of those developers that put a criminally low RTP in their games. So, players are safe, and this will be obvious as you play the game for real money, it pays well. Variance seems to be medium, the game is enjoyable and doesn’t feel tight but it’s not loose either.

Monkey Pirate is a decent game with two very good features – the Walking Wilds with free re-spins, and the very interesting and rewarding free spins game. Not only that you get to enjoy those win multipliers and other stuff, but selecting the Islands is fun too as it gives you a break from spinning the reels. All in all it’s a very good game, very well balanced, and you should try it out. This is a classic GameArt release that doesn’t do anything wrong and has shiny graphics with lots of gold, and Monkey Pirate is one of their better games as the theme inspired a deeper game than usual.

Monkey Pirate is a fun GameArt slot game with good graphics and two excellent bonus features, the free spins with win multipliers, and the Walking Wilds feature with free re-spins in the base game. Monkey Pirate has 100 fixed paylines.

Hurray! There is a competition going between users of our site!
You have to do nothing, but browse out site, and win a daily prize. Click here to read more.
You current ranking:
Time Left: 9h 55m 9s