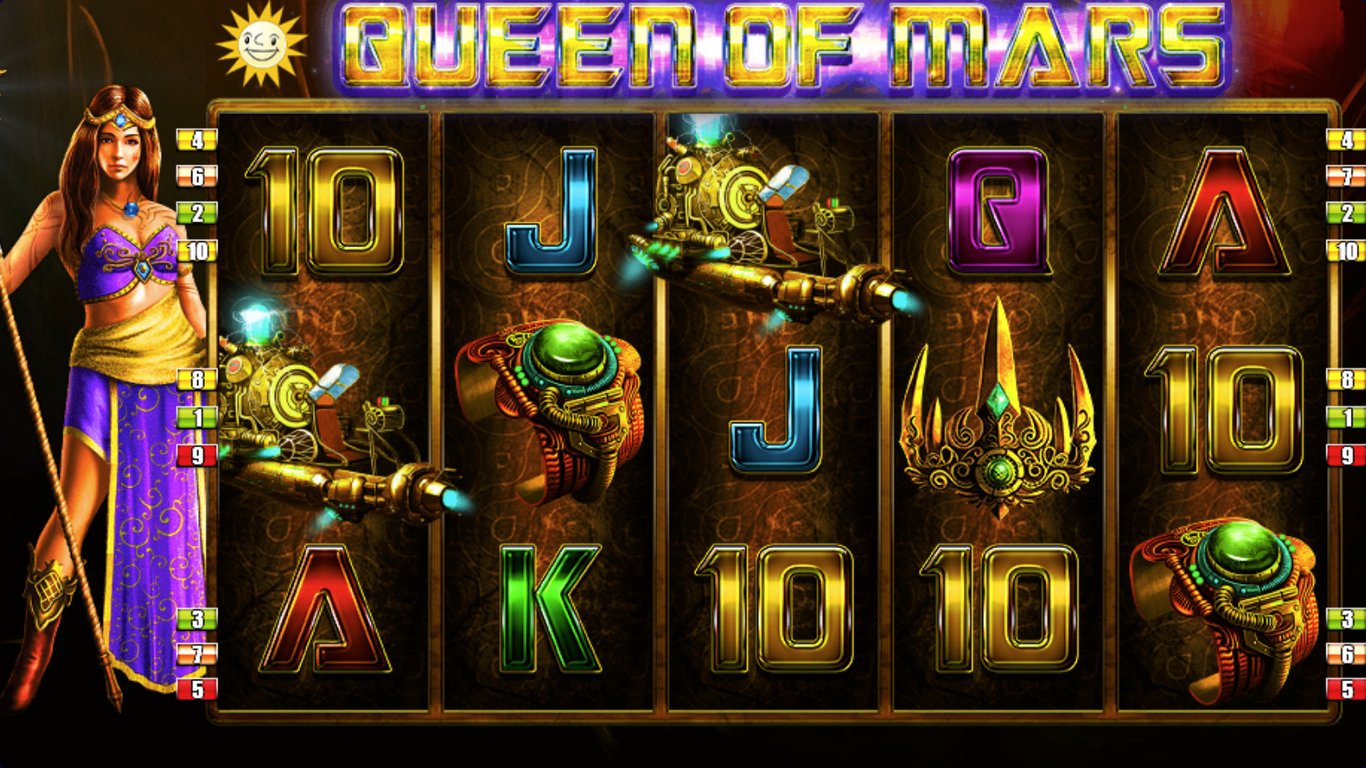 Queen of Mars is a 2018 release by Merkur Gaming, and it’s a classic slot with a generous paytable and a very good theoretical payout. The best thing about this game is the paytable, or more precisely, the chance to win 500x your bet when you land five Battleships.

Best Casinos to Play Queen of Mars for Real Money : 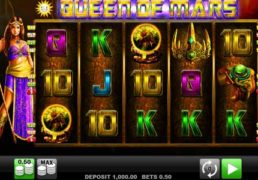 Queen of Mars is a game that could be best described as a Cleopatra slot, except that in this case the queen rules over Mars. The symbols are still similar to all those Egyptian slots, and this is a welcome addition to the genre. I have played this slot game for a few hours and I quite enjoyed the theme. Let me break down the pros and cons of this slot for you.

This is a classic slot with five reels and 10 fixed paylines, and the bet per spin can range from $0.10 to $20. Theoretical return to player is 95.94%, which is almost 96%, and that means that this is a rare classic slot that pays as well as modern slots. Variance is high.

The paytable is very generous, and it can produce a huge win on any spin. Battleship is the most dominant symbol on the reels and also the best one in the paytable, as it pays a whopping prize of 500x your bet when you land five-of-a-kind. Even for four-of-a-kind, you’ll get 100x, which is better than almost anything else in the paytable. The only two prizes above that are the second-best symbol, which gives 200x for five-of-a-kind, and five Scatters, which also give you a 200x prize. Two more medium-win symbols pay 75x for five-of-a-kind, and the five card symbols are insignificant in comparison as their top prize is 15x. Scatter also serves as a Wild. This symbol could have perhaps been designed better, as it’s very powerful, yet it isn’t immediately noticeable when it lands on your reels as it blends in with the theme.

This is a rewarding paytable with not that many symbols, only nine plus Scatter/Wild, so classic slot players will enjoy Queen of Mars for its potential to deliver a big win on any spin. Variance is high, of course, but that’s exactly what you want from a slot game such as this one. Some will say that this game doesn’t have that Cleopatra treasure which you expect from the genre, but it is here, it’s just that it isn’t hidden behind some fun feature but is instead available when you land four or five Battleships on a winning payline. 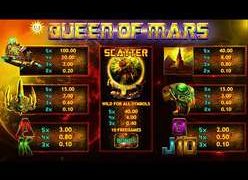 You need to land three Scatters to trigger the free spins game, and you can win up to 10 free spins. Before the free spins begin, a special symbol is automatically selected for you, and when that symbol lands on the reel it will expand to fill the entire reel. This is often seen in classic slots, and is a feature many players enjoy. Depending on your luck, you can get a high-win symbol chosen as the special symbol, and in that case you might just win big during the free spins game. This isn’t one of those free spins games which are really rewarding, but is instead just some bonus cash. This is a slot machine in which the main game rules, and you’ll need to dedicate several hundred spins to this game if you want to have a chance to make the slot pay.

Queen of Mars is an innovative slot when it comes to the theme, but the rest of the game is a classic slot through and through, with a free spins game that has a special expansive symbol. The reason to play this game is a chance to win 500x your bet when you land five Battleships, and this can make you rich instantly, depending on the size of your bet. This game is a very simple one and there are few things to look forward to, but those that you do look forward to are quality wins. This game is recommended to die hard classic slot players.

Queen of Mars is a 2018 release by Merkur Gaming, and it’s a classic slot with a generous paytable and a very good theoretical payout. The best thing about this game is the paytable, or more precisely, the chance to win 500x your bet when you land five Battleships.

Hurray! There is a competition going between users of our site!
You have to do nothing, but browse out site, and win a daily prize. Click here to read more.
You current ranking:
Time Left: 15h 24m 25s