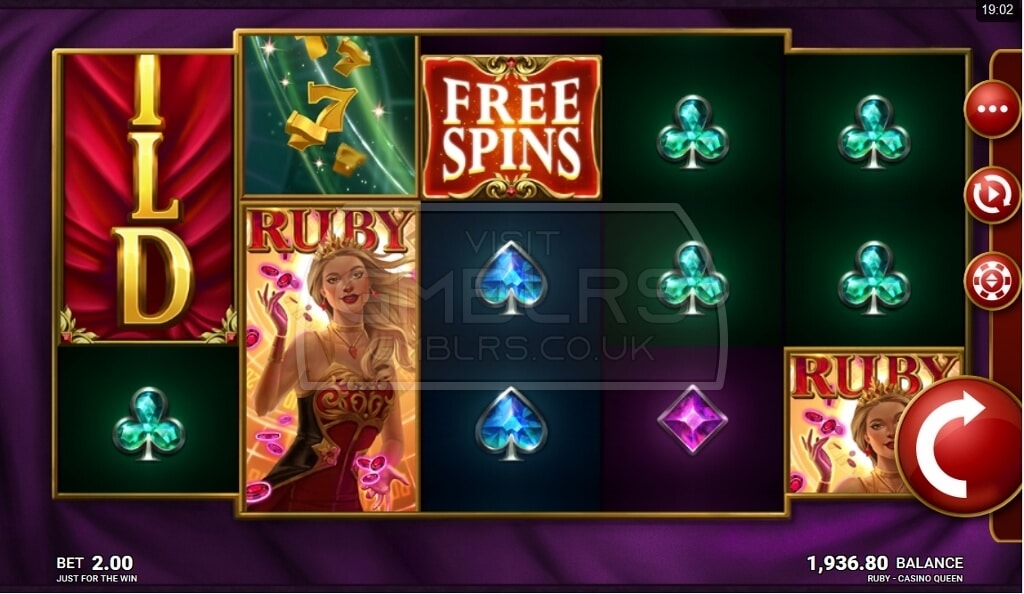 Ruby Casino Queen is a high variance slot by JustForTheWin that has Sticky Wilds and Multiplier Sticky Wilds, and if you land enough of them in the free spins game you’ll get huge wins, but in the base game the payouts will be small and far in between.

Although it may seem that this game is played on a board that has larger three middle reels, this is in fact a 5×3 game, it’s just that the middle three reels appear larger but they still have three symbols each. The game has 20 fixed paylines. 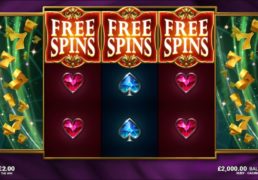 There are four card suit symbols that all pay the same, up to 1.5x your bet, so they’re mostly useless, even in a large multi-payline winning combination. Sevens and Diamonds are the two fully stacked medium-win symbols that pay 2.5x total bet for four-of-a-kind and 8x total bet for five-of-a-kind, and all Wilds as well as the Ruby Queen symbol all pay the same – 3x for four-of-a-kind and 20x for five-of-a-kind.

This kind of paytable creates a high variance game in which all wins smaller than five-of-a-kind won’t matter much, and with the low win frequency it’s rare to see any kind of win at all, while at the same time the paytable doesn’t offer enormous wins. The only way to get huge wins is through the free spins game, where Multiplier Sticky Wilds and Sticky Wilds make their appearance. 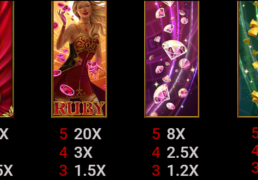 The free spins game has high variance as wins aren’t that common in this game to begin with, and the Sticky Wilds and Multiplier Sticky Wilds are as rare as Scatters, maybe even more rare than that. So, it’s not a given that you’ll win a lot of money from the free spins feature. Occassionally yes, but most of the time it will just be a decent win and nothing more.

Theoretical return to player (RTP) is 96.03%, which is good enough, but sometimes it feels as if the game isn’t paying at all. This is because of the huge discrepancy between the base game which doesn’t pay and the free spins game which is capable of showering you with money if you land enough Wilds. The game can pay, but you need to make it pay by making hundreds of spins.

Ruby Casino Queen is a high variance game so players who are looking for this type of game will be all over it, as the Sticky Wilds and the win multipliers in the free spins game are very tempting. With a maximum win multiplier of x6, a full board win of the best symbol would be worth 2,400x your total bet, and that’s a great reason to play this game for real money. You’ll find it in online casinos that feature JustForTheWin slot games.

Ruby Casino Queen is a high variance slot by JustForTheWin that has Sticky Wilds and Multiplier Sticky Wilds, and if you land enough of them in the free spins game you’ll get huge wins, but in the base game the payouts will be small and far in between.

Hurray! There is a competition going between users of our site!
You have to do nothing, but browse out site, and win a daily prize. Click here to read more.
You current ranking:
Time Left: 11h 58m 16s
Gambling is for 18+ though some countries may have other restrictions...Remember you should always Gamble Responsibly
We use cookies to ensure that we give you the best experience on our website. If you continue to use this site you agree to allow us to use cookies, in accordance with our Terms & Conditions.Agree & Close