Ted: Pub Fruit manages to merge together the traditional slot imagery of fruit icons with the character of Ted from the movies of the same name. Does it work? Well, it’s quite the unique setup, featuring a myriad of bonus perks alongside the base game.

I absolutely loved the first Ted movie when it came out at the cinema. It’s one of those fun and almost insane movies that just makes you chuckle with laughter. This Blueprint Gaming slot offering takes the entertainment factor to a new level, allowing you to experience the modern with the traditional. Yet, it’s not only the base gameplay that is entertaining, because there are various special features in the game to interest you as well. 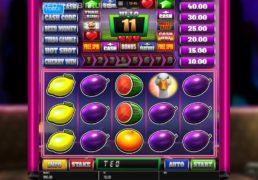 The main game of Ted: Pub Fruit has a set of five reels to spin, with three rows joining them. Across this layout, there are five pay lines for you to bet on. Speaking of your bet, this is something that you’re able to change by pressing on the “Stake” button. By doing so, you can choose from wagers between €0.10 and €10 per spin.

Visually speaking, the reels feature symbols of fruit to begin with – which is the traditional side of the slot. Therefore, you’ll see cherries, a lemon, an orange, a plum, grapes and a watermelon appear as symbols. There’s also an icon of a goose, while Ted himself makes up one of the higher-paying additions. Finally, the logo of the movie is the highest paying overall symbol, rewarding you with up to 50 times your stake as a pay-out. 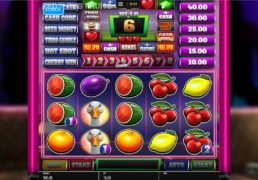 At first, it looks as though Ted: Pub Fruit is going to be a basic slot game. Yet, it does have special feature rounds integrated into it, too. There are so many of these, that I was quite overwhelmed by such.

To begin with, you will see a bonus meter above the reels. Every time that you spin an icon with a “1”, “2”, “3” or so on sticker attached to it into view, this will increase up to a maximum of eight. If you manage to collect four bonus icons though, the bonus round begins.

From the bonus round, you can trigger any number of features, depending upon what the Hi-Lo counter spins to. This can go from a Trail Run, which sees you collect numerous rewards in one go, to a freespin of the main reels, to collecting the cash and then to additional features.

If you trigger an additional feature, you can get the Cherry Win, which will provide you with at least one cherry win on the base reels. There’s also the Beer Money round, which provides you with three beer bottles to choose from and reveal a cash win behind such. The Cash Code feature builds up several bonus cash wins for you to claim, while Hot Shot flashes between cash wins and you have to stop it on one.

Other inbuilt features include the Trubo Gamble, the secondary Hi-Lo trail, Ted Cash, Golden Goose, Super Spin and more. It’s quite overwhelming how many features this slot game has. 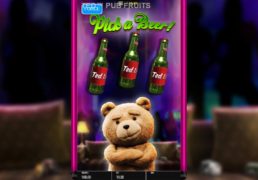 Had I seen this game and not played it, I probably would have bypassed it without recommending it to anyone. But having delved in and spun its reels, I can honestly say that it’s one of my favourites from Blueprint Gaming. The graphis are quite good, but it’s the inbuilt features of Ted: Pub Fruit that really make it completely appealing.

Ted: Pub Fruit manages to merge together the traditional slot imagery of fruit icons with the character of Ted from the movies of the same name. Does it work? Well, it’s quite the unique setup, featuring a myriad of bonus perks alongside the base game.

Hurray! There is a competition going between users of our site!
You have to do nothing, but browse out site, and win a daily prize. Click here to read more.
You current ranking:
Time Left: 5h 6m 32s