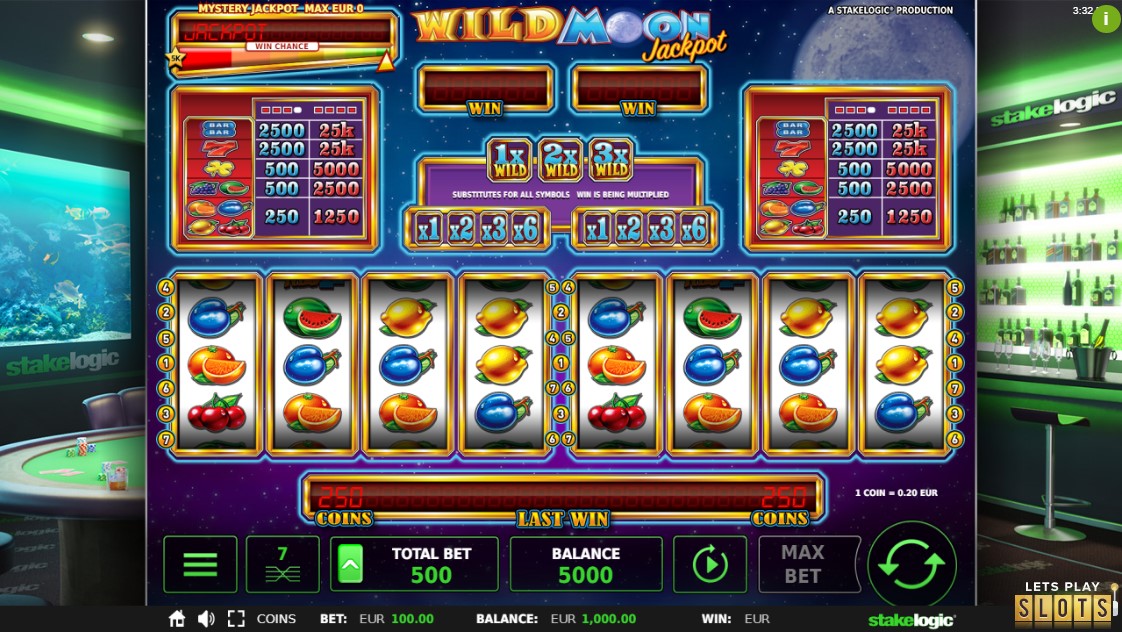 How about a little bit of retro slot machine fun? Well, that’s precisely what will be brought to you by the Wild Moon Jackpot 5K slot offering from StakeLogic. Prepare for its Wild symbols to arrive and cash out a large jackpot in the process!

Anyone who knows me will know that traditional slot machine games don’t often stand out to me in any way, shape or form. However, Wild Moon Jackpot 5K by StakeLogic is quite the exception to that. This one has a unique layout design, features the potential for a progressive jackpot win and even brings some great graphics to your screen, too. In short, if there’s a classic slot that could appeal to me, it would be this one. 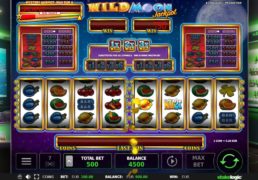 The main game consists of two sets of four-reel, three-row layouts. These both spin at the same time, but provide their own separate pay-outs from winning combinations. Across both of these reel sets, there’s the inclusion of seven paylines to bet on. And speaking of your bet, you can adjust this between 1 and 250 coins by using the buttons at the bottom of the reels. Additionally, you can select whether you just want reel set one or two active, or both reel sets. With both, a maximum overall wager of €100 per spin will be in play.

Classic slot games aren’t particularly renowned for having stellar graphics included in them, which is one of the reasons that I normally don’t care for playing them. This StakeLogic offering is different in this respect though, having some visually appealing imagery running through it. The symbols themselves are very traditional, starting with cherries, a lemon, a plum and an orange. Then comes the watermelon and the bunch of grapes, followed by a four-leaf yellow clover, which can pay out up to 5,000 coins. A red 7 and a double BAR symbol also appear on the reels as its highest-paying icons. 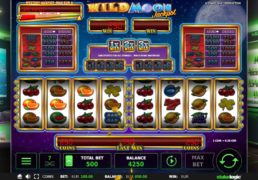 During your gameplay, you may see wild symbols come into view on the reels. These are always multiplier wilds, featuring amounts of up to 3x written on them. Naturally, if these participate in a winning combination, then they will multiply your reward by the amount displayed on them. These can only show up on reels two and three on each of the reel sets and if more than one of them substitutes in a win, the multipliers will be combined together for an even bigger pay-out.

There’s also a mystery progressive jackpot reward that can be won while spinning the reels of this game. I quite enjoy this inbuilt feature, and you should know that the higher your stake, the higher the chance of winning this random jackpot is. Every time you and all other players place a bet, this contributes to the progressive total. Then, should the random jackpot win come to you, a portion of this will be paid out to you as an extra special reward! 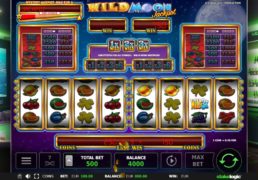 As noted, I’m never usually a fan of such traditional slot games, but StakeLogic has created a good one with Wild Moon Jackpot 5K. It’s got some impressive graphics built into it and I’m always keen to try for a progressive jackpot win, making this one stand out a lot more. Overall, it’s a great slot game to play.

How about a little bit of retro slot machine fun? Well, that’s precisely what will be brought to you by the Wild Moon Jackpot 5K slot offering from StakeLogic. Prepare for its Wild symbols to arrive and cash out a large jackpot in the process!

Hurray! There is a competition going between users of our site!
You have to do nothing, but browse out site, and win a daily prize. Click here to read more.
You current ranking:
Time Left: 14h 17m 16s
Gambling is for 18+ though some countries may have other restrictions...Remember you should always Gamble Responsibly
We use cookies to ensure that we give you the best experience on our website. If you continue to use this site you agree to allow us to use cookies, in accordance with our Terms & Conditions.Agree & Close