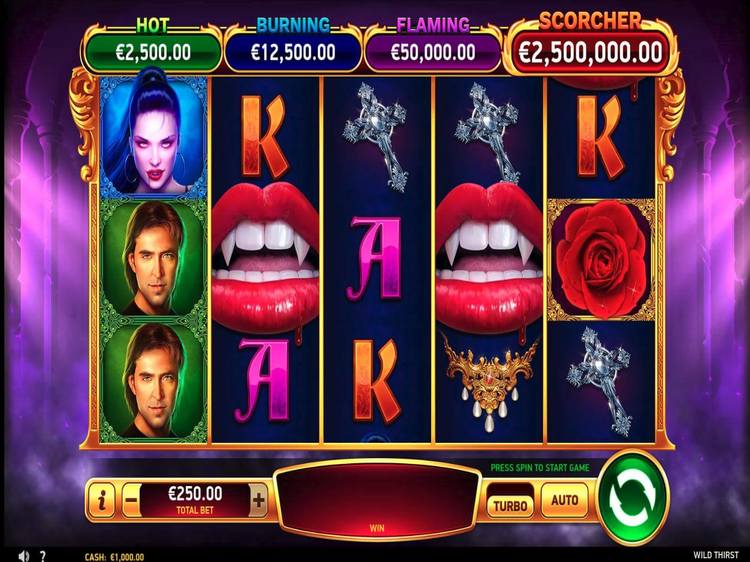 Wild Thirst is a Ruby Play slot game that draws heavily from classic slots, and essentially the only prize worth mentioning is the 10,000x non-progressive jackpot for landing 15 Firecatcher symbols, while the rest of the game doesn’t pay or play well at all. You can win €10,000 on a €1 bet though!

Wild Thirst is played on a traditional 5×3 board, with 30 fixed paylines, but you pay whopping 50 coins to play. In this review we’ll see if it’s worth it or not, and in any case, the minimum bet per spin is €0.50, which is a bit high. The maximum allowed bet stands at €250 per spin. 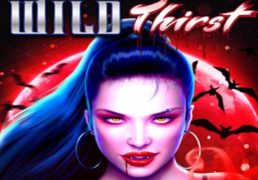 The paytable is a small one, with eight symbols, and the prizes are minimal, at least as far as single payline wins are concerned. The maximum prize is 2.50x your bet, and you’ll get that for five Female Vampires, while three-of-a-kind prizes can only get you between 0.1x and 0.3x. This is one of those games.

It’s just not possible to make money in the base game, not with a paytable such as this one. The maximum prize is 2.50x your bet, so with 30 paylines that means a full board win would be worth 75x your bet while in most games prizes for full board wins range in hundreds or thousands. There are no win multipliers in the base game, and the situation does get a lot better in the free spins game.

When you land three or more Scatters you’ll win free spins, and will always get only 8 free spins plus the Scatter cash prize. During the free spins, Wilds on reels 2 and 4 can multiply wins up to x25 total as one wild can multiply it by x5.

It’s best to think of Wild Thirst as a jackpot game. Even with a minimum bet, the jackpot would be €5,000 and it can rise all the way up to €2,500,000 but for that kind of bet per spin (€250) you’d have to have a million already. In any case, the rest of the game is very difficult to play as the jackpots take a lot of the RTP, so don’t play this game in hope of winning during the base game. In the free spins game it gets much easier but still not good enough. This is a jackpot game.

Wild Thirst is a Ruby Play slot game that draws heavily from classic slots, and essentially the only prize worth mentioning is the 10,000x non-progressive jackpot for landing 15 Firecatcher symbols, while the rest of the game doesn’t pay or play well at all. You can win €10,000 on a €1 bet though!

Hurray! There is a competition going between users of our site!
You have to do nothing, but browse out site, and win a daily prize. Click here to read more.
You current ranking:
Time Left: 10h 22m 30s