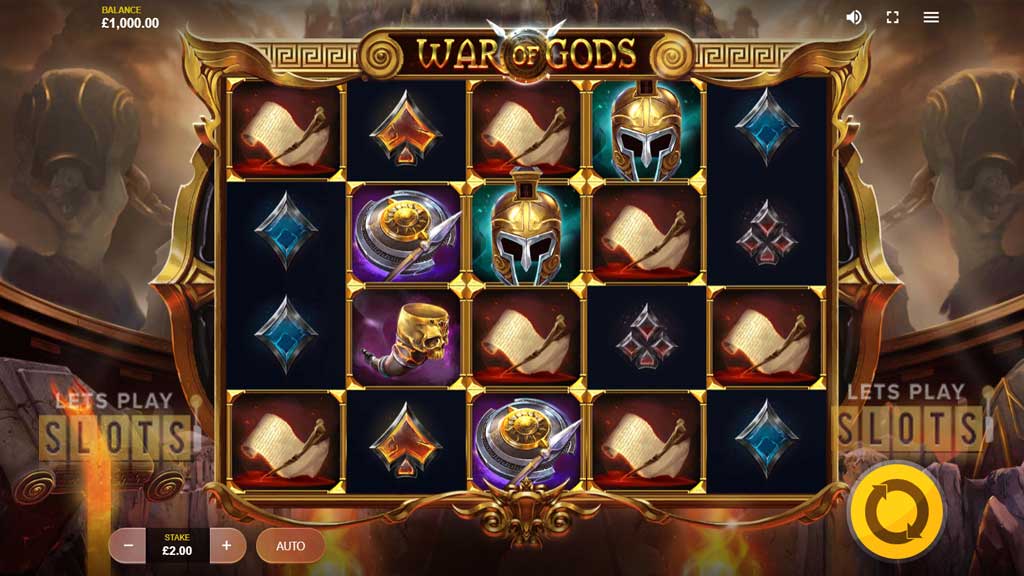 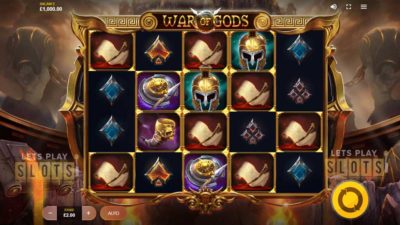 Greek mythology continues to be a favorite theme with slot developers in 2021.

Red Tiger Gaming returns to Ancient Greece to allow players to participate in their latest “War of Gods” slot as Hades and Zeus clash to see who is the top god.

Players are taken to a flaming underworld. The background dominates the entire screen, with ruined columns and lighting flashing. This is combined with the Greek theme and appropriate background music. The grid dominates the center of the screen.

There are five reels and four rows to play with. The game has 30 paylines for players to win.

That is a pretty decent amount of paylines which will increase your chances of winning. The betting rate for this game is pretty low. Starting bets are at $0.10 and go only up to $10. The low maximum bet means that mid stakes players and high rollers will not find this slot very appealing.

The game has a nice spread of symbols though. There are four card suits for the low-value symbols. Thematic symbols make up the higher paying symbols. They include a hunting horn, parchment, a shield and spear, a Spartan warrior’s helmet, which is the most valuable ordinary symbol. The two gods in the middle of the battle, Hades and Zeus, are also part of the mix.

Surprisingly, the game does not have a Wild symbol or the standard Free Spins feature. The game makes up for this with three different Hold and Win features.

Finally, there is the Warring Gods feature. Players will need to land both Hades and Zeus on the reels and it will trigger a combination of the first two Hold and Win features. The biggest difference is that it can allow players to win the biggest prize of the game which 2518x of their bet. This game has an average RTP of 95.66 percent.

Go ahead and check out War of Gods slot today.

Hurray! There is a competition going between users of our site!
You have to do nothing, but browse out site, and win a daily prize. Click here to read more.
You current ranking:
Time Left: 2h 59m 34s