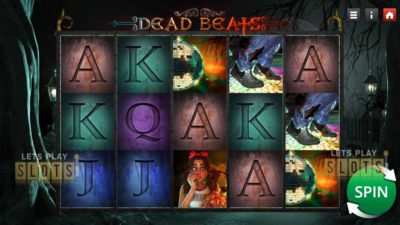 Slot themes continue to explore new dimensions as developers are constantly looking to mix things up and make the game more appealing to players from around the world.

The developers at Saucify wanted to spice the idea of zombies up so they mixed it with an idea of a dance party. Now zombies are on the dance floor in the new “Dead Beats” slot.

In this game, players are taken to the graveyard where zombies are dancing and partying. It is an amusing mix of themes and looks to be a very adventurous theme.

Don’t expect a dark and scary slot as the developers have made it engaging and rather light.

There are five reels and three rows for this game, with 30 paylines. The theme of the game comes through with the different thematic symbols in play.

The card royals act as the lowest-value symbols and payout enough for players to keep spinning the reels. The high value symbols come in the form of dancing zombies, disco balls, a worried cheerleader and the logo of the game. There are also several special symbols in play. The graveyard symbol is the scatter while there are two wild symbols, the cheerleader and the zombie.

The betting range in this game starts from $0.01 and goes up to $37.50. The low minimum is nice but the low maximum is a problem since it can discourage high rollers from playing.

The game has some really nice special features that make things a lot more exciting for players. This is thanks to the two wilds and the scatter. The first wild is a zombie and when it appears it expands. It only shows up in reels two and four. Then there is the cheerleader wild. It appears as a regular symbol during the basic game but when free spins start it suddenly become a wild symbol.

As for the scatter, players need to score three or more scatters to get free spins. The three scatters give out 17 free spins, while four scatter give 22. The maximum amount of scatters will give 26 free spins. During all the spins, all of the wins are doubled. That is a great bonus and can allow players to hit the maximum jackpot of $375. Dead Beats has an RTP of 95.63 percent.

If you are looking for a fun theme and don’t mind small payouts, go ahead and try Dead Beats.

Hurray! There is a competition going between users of our site!
You have to do nothing, but browse out site, and win a daily prize. Click here to read more.
You current ranking:
Time Left: 11m 47s