Join The Wilde Family In Search for “The Shield of Athena”

Join The Wilde Family In Search for “The Shield of Athena” 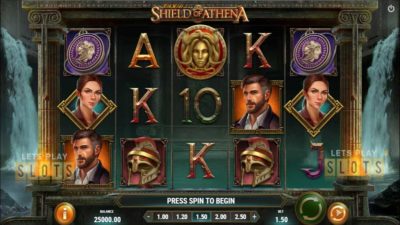 Play’n GO has been releasing slot games for years now and one of their big hits is the Rich Wilde series. Starting in 2016 with the Book of Dead and another release in 2019 with Tome of Madness, the Rich Wilde series is a big hit for the game maker. Now, they are bringing him back, with his daughter Cat Wilde along for the ride. This time, Rich is on the hunt for the Shield of Athena and the players are here to help.

This game takes players to the temple of Athena so that they can help Rich Wilde in his hunt. The game has great graphics and players will love the 3D effects that the game has. The background of the slots is an underground temple with many waterfalls and a massive statue of the goddess herself. Besides looking good, the game performs well since it is made with HTML5, allowing it to be played on multiple platforms.

The game boasts of five reels and three rows. With 10 paylines, it may seem like there are low chances for a win but the RTP is a decent 96.25 percent. Players can wager as small as 10 cents but they can go high and spend $100 per spin.

The game has the basic rules of all slot games, where players get to win by matching symbols. For this game, there are low-level symbols that give out decent prizes. But what players will want to score are the four premium symbols. These are owl statutes, purple pendants, blue rings, and red helmets. There are also three special symbols: a Rich Wilde Wild symbol, a Cat Wilde Scatter symbol, and the shield of Athena symbol. Players can get 1,000 times their stake if they get the best possible symbol scored.

Players who want to win big will want to trigger the special features of the game. First, there is the Medusa Re-spin feature. This can happen randomly during the game. Lucky players can suddenly get it and get a spin. But during this spin, the Shield of Athena symbol turns wild and they also become locked in place.

If more Shield of Athena Symbols shows up, then they also lock in and players get another spin. The respins continue until no more Shields appear and no winning combinations are made. The great thing about this mode is that all wilds and scatter symbols change into the Shield of Athena symbols for this game mode.

Players can also get free spins with the Cat Wilde scatter symbol. Up 15 free spins can be triggered by scoring three or more of them. Overall, this looks like another winner in the Rich Wilde series.

Hurray! There is a competition going between users of our site!
You have to do nothing, but browse out site, and win a daily prize. Click here to read more.
You current ranking:
Time Left: 20h 11m 22s