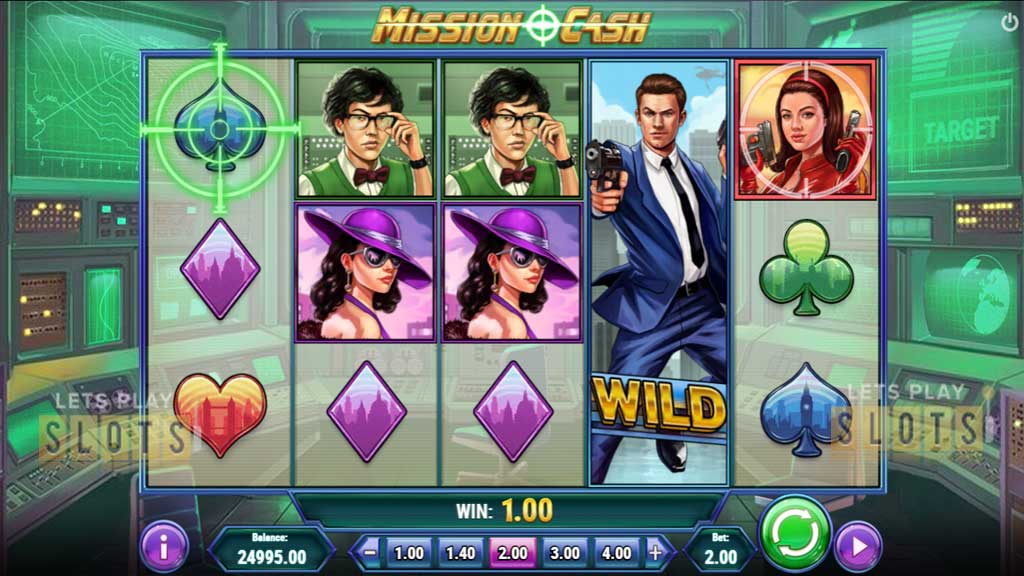 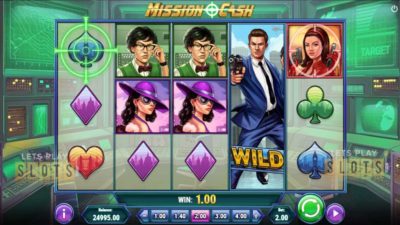 James Bond films made the role of the undercover agent super popular all over the world. Play’n GO has decided to use this theme for its latest slot called “Mission Cash“.

With lush graphics and a pulse-pounding soundtrack, players will be able to enjoy every minute of this game. Helping out the various color agents will surely be a rewarding experience.

Players will be taken immediately to a 60s style spy control center and set up with a five reel, 20 payline grid.

Players will be looking to complete combinations to help agents achieve special missions.

The basic card symbols of spades, hearts, diamonds and clubs act as the low paying symbols. There are also the four different agents: Agent Red, Agent Blue, Agent Green and Agent Purple. The most valuable among them is Agent Blue. With five of him on a payline, players will get 50 times their stake.

Each spin has a special cross hair moving around. If it stops on either Agent Blue or Red, the entire reel becomes wild and players get a free spin. Known as the Take the Shot Re-Spin feature, this will give players a good chance at winning as the wild reel is locked in place for one spin.

Besides this, the cross hair is still active during the respin. If it spots Blue or Red again, the same thing happens. This continues until another symbol is targeted by the cross hair or until five wild reels appear.

The game also has a Free Spin feature. The cross hair continues to work in the same way but if it lands on a silenced pistol scatter symbol, then players get free spins. There will be eight frees spins and the Take the Shot feature now works with all agents instead of just Red and Blue. Players can also get another set of free spins if they land another scatter symbol.

This game is an excellent high variance game. Players who are lucky can get 1,000 times their original stake. Plus, with the free spins feature, the amount can be taken even higher to 5,000 times their stake. Combined with the classic theme, players will be able to a lot of fun with Mission Cash. Give it a spin or two and see if you can hit the large jackpot on offer!

If you looking for more spy related slot games why not try “Spy Rise” from Playtech or “Spy Girls” from AGame.com

Hurray! There is a competition going between users of our site!
You have to do nothing, but browse out site, and win a daily prize. Click here to read more.
You current ranking:
Time Left: 15h 53m 17s