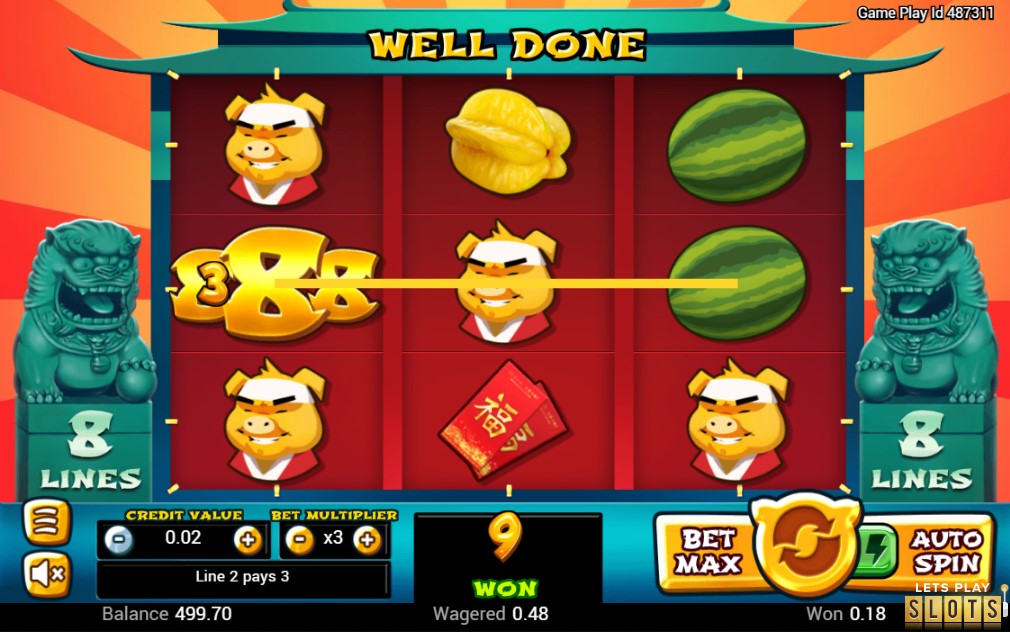 The Golden Pig is the key to your fortunes in this Top Trend Gaming slot. Featuring some high-quality graphics and intriguing gameplay, make sure you’re on the lookout for the arrival of the Free Spins round in this slot.

If someone were to say to you the words, “golden pig”, what would you think about? Well, you’d obviously think about a pig that’s golden, right? Well, that was the first idea that came into my head upon hearing of this Top Trend Gaming slot. However, while the game does feature such a prominent character, it has so much more to offer up as well. If you enjoy 3-reel slots with a bit of added intrigue, this one is a game that I think you’ll like. 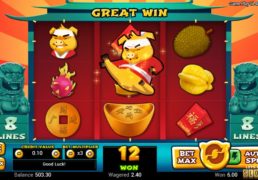 Golden Pig is a three-reel and three-row slot game, and it also features eight paylines across this layout. You’re not able to change the number of active paylines, but you can adjust the value of the bet that you place on these lines. This is done by selecting a coin value between €0.02 and €5 first of all. Then, you can multiply the bet by up to 5x, for a maximum overall wager of €200 per spin.

Top Trend Gaming won’t really be outdoing any other developers in terms of the graphics in this slot. That’s not to say that they’re bad – far from it. They do fit in well with this slot game, though. The first of its symbols come in the form of fruits, starting with the cherries, orange and dragon fruit. There’s also a watermelon, a starfruit and a lychee. The reels also incorporate red Chinese New Year envelopes, a gold pendant and a gold ornament. 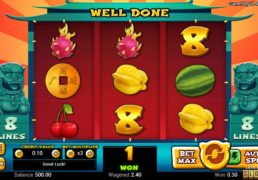 Playing this game will also allow you to experience one or two special features as well, with the first one being the possibility of forming wins in various ways. While you can create wins on the eight paylines, you can also receive a reward for covering the reels with one and the same symbol. Additionally, if you spin four of the same symbol into the four corners of the screen, you’ll also receive a pay-out for such.

There are two scatter symbols in the slot as well, with the first one being the number 8. Eight of these in view across the reels will provide a reward of 4,000x your stake. There’s also the inclusion of the golden pig scatter, which can reward you with up to 20,000x your stake altogether. This particular scatter can only appear during the free spins round of the game.

Speaking of the free spins round, if the golden pig symbol shows up during base gameplay on reels 1, 3, 5, 7 and 9 OR 2, 4, 5, 6 and 8, this round begins. You’ll get five free spins to play through with the aforementioned additional scatter symbol coming into effect. 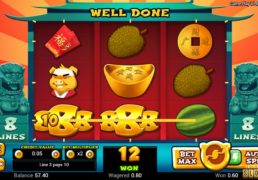 I have to say that I do enjoy playing Golden Pig. It deviates away from what is considered the norm for 3-reel slot offerings, and that’s always something to be appreciated. I also enjoy the inclusion of the free spins function, as well as the two scatters. Overall, it’s a nice addition to the Top Trend Gaming catalogue of games.

The Golden Pig is the key to your fortunes in this Top Trend Gaming slot. Featuring some high-quality graphics and intriguing gameplay, make sure you’re on the lookout for the arrival of the Free Spins round in this slot.

Hurray! There is a competition going between users of our site!
You have to do nothing, but browse out site, and win a daily prize. Click here to read more.
You current ranking:
Time Left: 20h 0m 4s