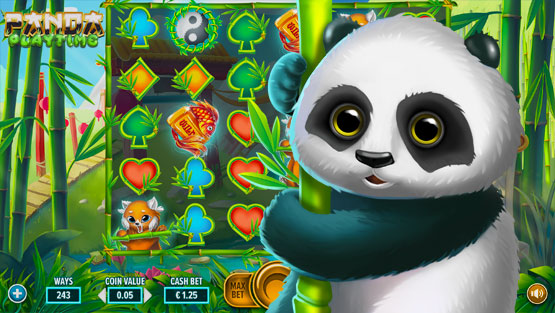 Not only does Panda Playtime provide you with some stunning graphics and inbuilt animations, but it’s got 243 ways for you to win, too. Alongside this, with a Sticky Win Re-Spin function in place and a Free Spins round available to trigger, you’ll definitely want to keep coming back for more.

I’m definitely a sucker for all things cute and cuddly, and Panda Playtime from Dragon Gaming was a shoe in for providing me with exactly that. After all, aren’t pandas one of the sweetest animals around? Fortunately, Dragon Gaming brings these bears and other creatures to life on its reels perfectly, with wonderful graphics and entertaining animations in play throughout. It’s not only the visuals of the game that are stunning though, because Panda Playtime also presents you with one or two special features during gameplay. So, you’ll no doubt find this slot to be a thoroughly entertaining one, as I did. 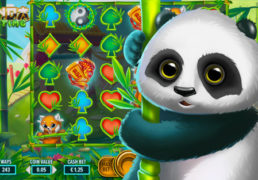 Panda Playtime is one of those games that may seem like it utilises a standard theme and setup from the outside, but once it’s loaded up, you’ll get to experience something totally different. I was quite impressed to find a layout consisting of six reels and five rows in the game, while 243 ways to win have also been included in it alongside. This gives it a larger layout than is considered as the norm, and the ways to win are fixed in place throughout.

The great part about this slot is that it also incorporates some wonderful graphics for you to see, with the background depicting a bamboo clearing of the forest. Naturally, you can expect to find pandas around their favourite food! Upon the reels, symbols of playing card suits can be found from hearts and diamonds through to clubs and spades. These are accompanied by additional flora and fauna symbols, including the purple flower and the red panda. All in all, the main game is filled with exciting imagery and entertaining graphics at the same time.

While the base game of Panda Playtime is entertaining enough in itself, there are also a couple of special features built into the slot, too. The first one of these actually activates whenever you form a winning cluster of symbols. At this time, the symbols included in the win will freeze in place after they have provided a pay-out. The remaining positions will then go through a single re-spin, and this is what is known as the Sticky Win Re-Spin feature. Should you manage to spin more of the same symbol into view and it manages to add to the win, the process takes place all over again. This feature can result in you forming Big Wins and Super Mega Wins.

As well as the Sticky Win Re-Spin feature, you’ll also notice a symbol of the yin and yang appearing on the reels. This one is able to trigger the slot’s Free Spins round. You’ll need to spin at least three of this one into view anywhere in order to activate that round, but if you do, you’ll still get to witness the Sticky Win Re-Spin take place every time you form a winning cluster. That’s two features in operation at once!

The RTP rate of this slot stands at 95.96%, so you should get quite a nice amount of play out of it. Speaking personally, I managed to spin the reels multiple times, receive some winnings in the process and have quite the extended period of gameplay. It comes with a volatility level of medium to high, so it can sometimes really give you some boosted wins.

On the whole, Panda Playtime is perhaps one of the best slots to be released by Dragon Gaming. I found it to be quite the captivating title and was thoroughly impressed with the re-spins that take place after every win that you form. Add the free spins feature to this and it’s certainly a slot that makes you want to keep spinning.

Not only does Panda Playtime provide you with some stunning graphics and inbuilt animations, but it’s got 243 ways for you to win, too. Alongside this, with a Sticky Win Re-Spin function in place and a Free Spins round available to trigger, you’ll definitely want to keep coming back for more.

Hurray! There is a competition going between users of our site!
You have to do nothing, but browse out site, and win a daily prize. Click here to read more.
You current ranking:
Time Left: 16h 53m 3s