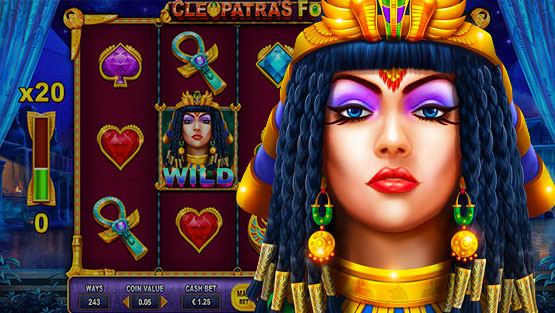 Travel back in time to Ancient Egypt when Cleopatra was on the throne. Experience the progressive re-spins of Cleopatra’s Fortune and enjoy the wonderfully high-quality appeal of the layout and symbols.

I’ve seen so many online slots that base themselves on Ancient Egypt. They’ve come and gone, and some of them have picked up traction while others have fallen by the wayside. It’s sort of reached the point now where I’m not surprised when another Ancient Egypt video slot is released, and that was precisely how I felt upon seeing the fact that Dragon Gaming had chosen to create Cleopatra’s Fortune. Alas, I’m not one to be put off simply by the theme and title of a slot game, so I knew that I would still test it out. As it happens, I’m quite glad that I did, because while it utilises an overused theme, it’s still a cracking slot game. 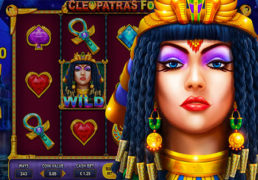 The main game of Cleopatra’s Fortune is made up of a set of five reels and three rows in total. This is a standard video slot interface, and if I’m honest, it was quite nice to see. The graphics included within the game are of a stellar nature, too. This extends from the background of the game through to the symbols that appear upon its reels. Naturally, these all adhere to the overall Ancient Egypt theme, so you’ll certainly find that the developer has put its all into creating the right atmosphere.

Players have the ability of customising their bet by using the relevant arrow buttons at the bottom of the reels, while the pay lines are set in position. To add to this, you’ve got the possibility of setting the reels off spinning several consecutive times at the same wager level with the autoplay button. Cleopatra’s Fortune has quite the standard base game, allowing you to spin its reels and create wins from three or more of the same matching symbol appearing on a winning bet line.

It’s reached the point now where one day I’m hoping to see something exceptionally explosive and new-fangled when it comes to slots with the Ancient Egypt theme built into them. As it happens, I sort of knew that I wouldn’t get it with Cleopatra’s Fortune, but it didn’t necessarily matter overall. There is a wild symbol appearing on its reels, and this one helps you with creating wins as it substitutes for all other standard symbols in the game.

Aside from this feature, there’s also the inclusion of the Progressive Re-Spins perk. This one will trigger every time you form a win during base gameplay. What this does is set the reels off on a single re-spin once you form a win. If you manage to bring another winning combination into view on that re-spin, then the whole procedure takes place again. This continues until no further wins can be crafted on a re-spin. So, you can imagine that it’s possible to create multiple combinations from the re-spins, which is quite a nice perk of Cleopatra’s Fortune.

This Dragon Gaming slot has an RTP rate of 95.95% attached to it, which is slightly lower than I expected it to be. After all, I did manage to spin a few winning combinations into view while I played. This could be due to the fact that it also has a medium volatility level, though. Overall, I was quite happy with how frequently Cleopatra’s Fortune paid out.

Cleopatra’s Fortune is one of those games that may not stand out amongst a mass of others with the same theme, but there’s still something very appealing about it once you begin spinning its reels. The inclusion of the progressive re-spins is a nice addition to it, and while it does have an RTP rate of 95.95%, for me personally, it seemed like this should be a bit higher. Overall, I’d recommend that gamers have a go at Cleopatra’s Fortune at least once.

Travel back in time to Ancient Egypt when Cleopatra was on the throne. Experience the progressive re-spins of Cleopatra’s Fortune and enjoy the wonderfully high-quality appeal of the layout and symbols.

Hurray! There is a competition going between users of our site!
You have to do nothing, but browse out site, and win a daily prize. Click here to read more.
You current ranking:
Time Left: 22h 2m 16s