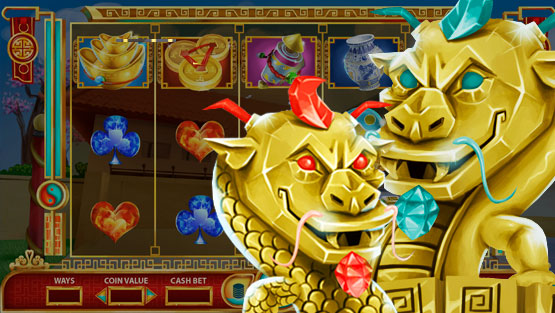 Experience the wonders of ancient gold dragons merging with the Eastern Asian continent in this Dragon Gaming slot. Load up its five-reel, three-row layout and find out what additional perks you’ll be able to benefit from with the Twin Dragons game.

I’m all for an exciting online slot game surrounding the theme of dragons. And, let’s be honest, with a title like Twin Dragons, it’s quite clear what sort of slot this is going to be. I was pretty much expecting to see exactly what showed up on the screen when I loaded this Dragon Gaming slot up. That’s certainly not a bad thing either, because I certainly enjoy seeing the Eastern Asian dragon theme in slots. Plus, Dragon Gaming executes it very well as far as the graphics and animations in the game go. It’s a standard online video slot, I’d say. Alas, it works very well and there’s more to it than first meets the eye. 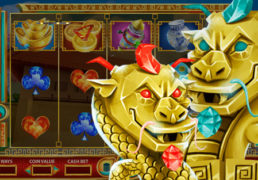 Once you load the Twin Dragons slot game up, you’ll be able to see the five-reel, three-row interface that’s on display. This is a standard design for a video slot, so it should look quite familiar to players of such casino games. At the same time, you’ve got a couple of customisation features to take advantage of, such as the arrow buttons to adjust your wager per spin. There’s also the inclusion of the autoplay button, which can be found in a vast number of online slots. Using this will allow you to set the reels off spinning at the same bet amount for a specific number of times without you needing to press the Spin button.

The visual side of Twin Dragons is another great part about it, too. Dragon Gaming has obviously made sure to include some of its best work in this slot, resulting in a visually stunning product. The background depicts some of the Eastern Asian lands, while the symbols on the reels tie in nicely with the overall theme as well. They begin with lower-paying additions, which are present in the form of playing card suits. Obviously, this means that there’s four of them available to spin into view. Following on from these, Twin Dragons also features some Oriental symbols, such as the ancient Chinese vase and the collection of gold pendants tied together with red ribbon.

Dragon Gaming is also known for including one or two specialities into its slot games to enhance the overall gameplay of them. Twin Dragons is no different in this respect, meaning that you’ll be able to benefit from the inclusion of additional perks. So, be on the lookout for wilds, scatters, free spins or other intriguing and beneficial special features.

Accessing this Dragon Gaming online slot will allow you to play a game with an RTP rate of 95.93%. It also comes with a high volatility level as well, though. Therefore, you may not receive pay-outs on as frequent a basis as some other games, but when you do, they’ll be of a higher value than what can usually be expected.

Twin Dragons certainly stands out from the first moment that you load it up, thanks to the inclusion of wonderful graphics from Dragon Gaming and entertaining animations. There’s a standard 5×3 layout on display, which makes it look much more familiar overall, but this is bolstered by the inclusion of high-quality symbols and one or two bonus features to make sure that you have a fully enthralling time playing it.

Experience the wonders of ancient gold dragons merging with the Eastern Asian continent in this Dragon Gaming slot. Load up its five-reel, three-row layout and find out what additional perks you’ll be able to benefit from with the Twin Dragons game.

Hurray! There is a competition going between users of our site!
You have to do nothing, but browse out site, and win a daily prize. Click here to read more.
You current ranking:
Time Left: 10h 42m 7s