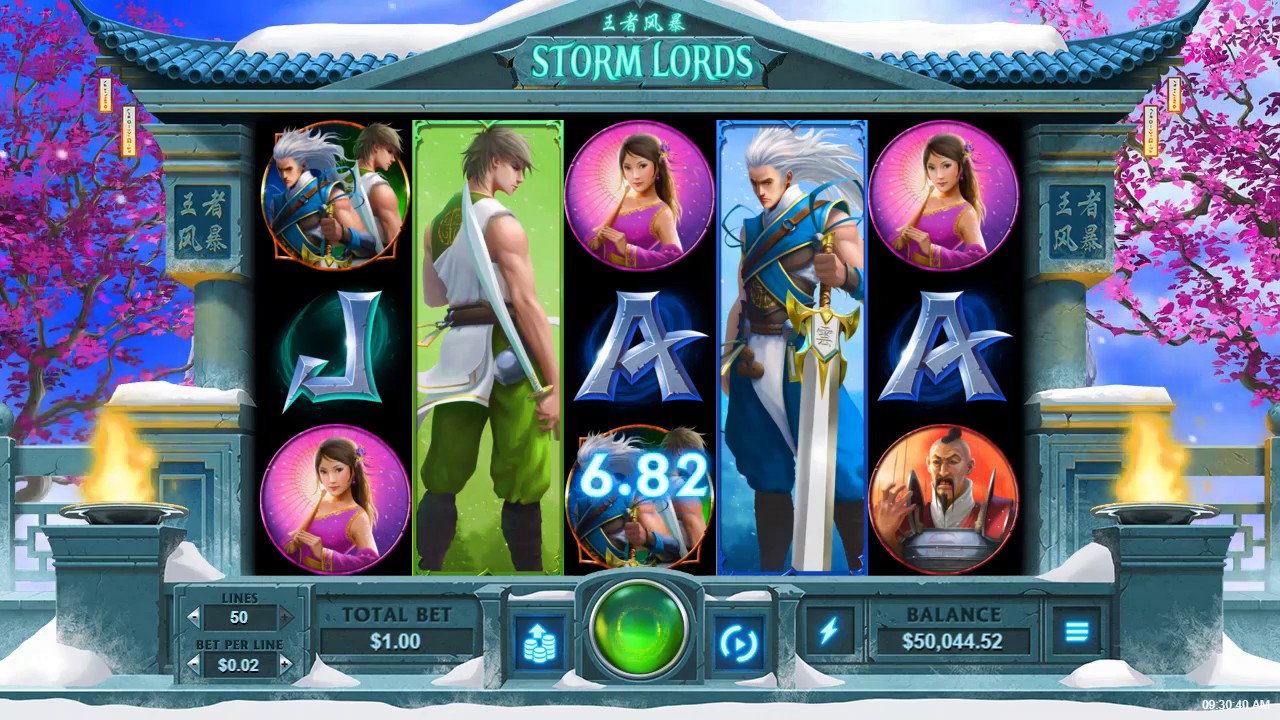 Storm Lords is an anime themed slot game by Realtime Gaming, with two Storm Lord Wilds, on reels 2 and 4, that are fully stacked and always nudge into position. There is a free spins game with these two Wilds held, and a Treasure Coin Feature where you try to gather up to 15 coins during re-spins, and if you do you win the Grand Jackpot!

The game is played on a standard 5×3 board, and the 50 paylines are selectable so the game can be played for €0.01 only if you’re willing to accept the fact that you’ll be playing on only one payline. For all 50 paylines, the minimum bet will be €0.50 while the maximum allowed bet in the game is €125 per spin. These are the usual ranges for Realtime Gaming and they’re offering a lot of flexibility. 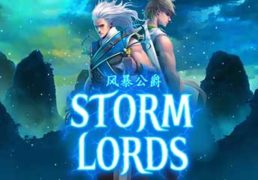 The two Storm Lord Wilds appear on reels 2 and 4 only, and whenever a part of the fully stacked Wild appears on the reel, the entire Wild will nudge into position and cover the reel. This makes a major difference in the game, especially during the free spins, if you choose an option to have the Storm Lords held throughout the feature.

The paytable has ten normal symbols, and six of these are card symbols that don’t pay well. It’s possible to get 2x your bet if you land five-of-a-kind but that’s it. The four main symbols are better, though again you have to land five-of-a-kind to get anything meaningful. Prizes for that are 200, 500 or 800 coins. 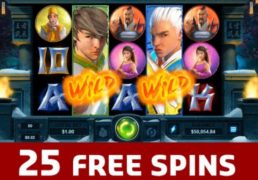 To trigger the Treasure Coin Feature, you need six Coins on your screen. At that point, you get 3 re-spins and need at least one more Coin to have it held and to reset the count to 3. At the end, when you have no more re-spins, prizes are awarded. The Grand Jackpot is awarded if all 15 positions are populated by Coins.

Realtime Gaming do not publicly reveal the exact RTP and it’s often configurable by the casino, but the value of 97.50% has been mentioned for this game. The only way to know for sure is to have the online casino where you’re playing explicitly state what the RTP of Storm Lords in their casino is. And if you do find a place where it’s verifiably 97.50%, then you’ll be playing an excellent slot game.

Storm Lords is a quality slot game, especially during the free spins game when you have those two Wild reels held, and the Treasure Coins are best left to pure chance instead of chasing them through the Treasure Spins Feature. In any case, this is a great slot game by Realtime Gaming and it should be played for real money as these two full Wild reels that come around very often are impossible to ignore. This is a game definitely worth playing, just try to pinpoint the exact RTP before you do so.

Storm Lords is an anime themed slot game by Realtime Gaming, with two Storm Lord Wilds, on reels 2 and 4, that are fully stacked and always nudge into position. There is a free spins game with these two Wilds held, and a Treasure Coin Feature where you try to gather up to 15 coins during re-spins, and if you do you win the Grand Jackpot!

Hurray! There is a competition going between users of our site!
You have to do nothing, but browse out site, and win a daily prize. Click here to read more.
You current ranking:
Time Left: 10h 17m 30s