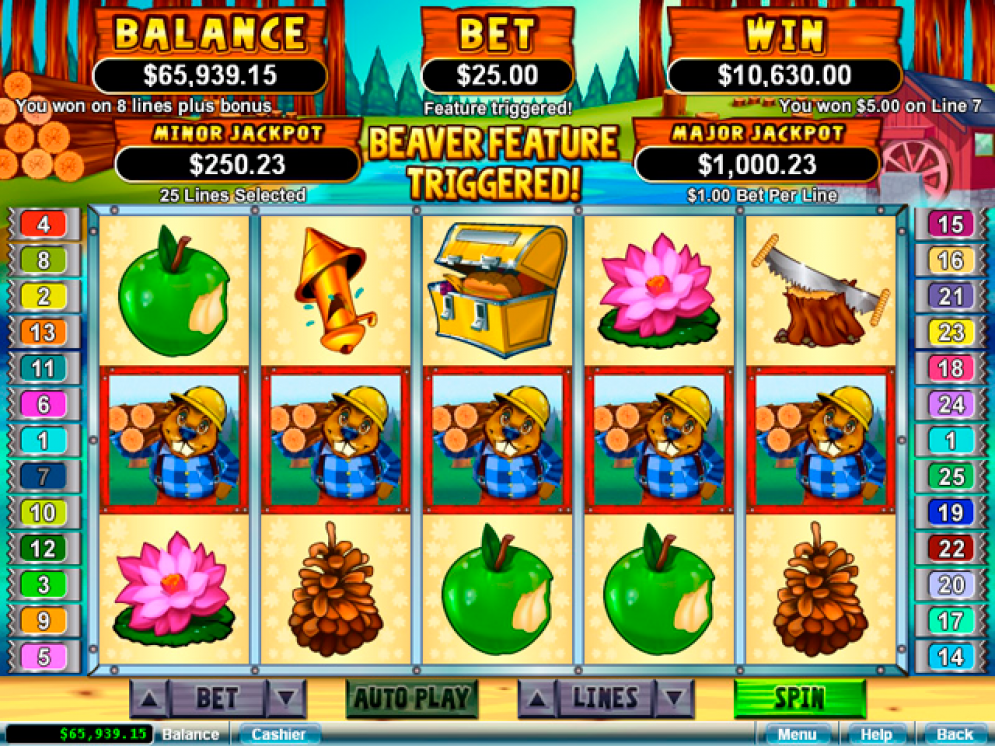 Builder Beaver is a 2012 Microgaming slot machine themed around beavers who are building a dam. You’ll enjoy two different versions of the free spins game, with 10 or 12 free spins! 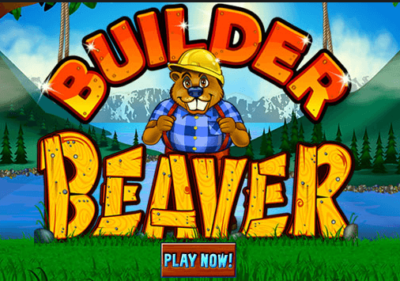 I have played Builder Beaver a lot over the past few days as I liked the bonus rounds, so let me give you an honest opinion about this Microgaming slot. The things I enjoyed the most are the two free spins games, especially the Sign Feature where Scatters act as Wilds. This is a cartoonish slot game with relatively poor graphics despite the game being released in 2012. Builder Beaver is popular even today as the game is simple to play and offers a classic slot experience, yet the bonus features are more fun to play than usual, and the theme is also nice.

There are ten normal symbols in the paytable and all have artwork, leading to a very colorful board with a lot of different stuff. You’ll see the Builder Beaver who is a Wild, his wife and friends, his home, and the six items he needs when he is building the dam. These six represent the low-value group and don’t pay well compared to the top four symbols which pay prizes between 2000 and 5000 coins for five-of-a-kind respectively. The unbalanced paytable with some powerful symbols can lead to some big wins, so players who enjoy higher variance will feel at home here. In addition to this ten symbols plus a Wild, there are also two Scatters, for a total of 13 symbols, which is plenty. The game has 25 paylines on a 5×3 board. 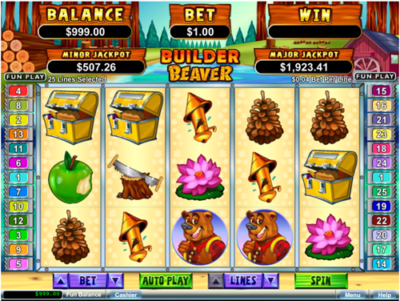 Theoretical return to player (RTP) for this slot isn’t known but is believed to be somewhere around 95%, so the slot game doesn’t pay exceptionally well but isn’t robbing you of your money either. Despite the high-win symbols variance is medium, as the game pays often and well enough for most players’ tastes. There’s no incredibly big cash prize to look forward to, other than the progressive jackpot, of course.

There’s another free spins game, and if you land three or more Beaver Wild Scatters you’ll be awarded with 12 free spins with all prizes tripled. The Beaver Wild Scatter won’t appear during this feature, which leaves just a bit more room for paying symbols. This feature can’t be re-triggered and overall I felt the first one, Sign Feature with 10 free spins, pays and plays better. 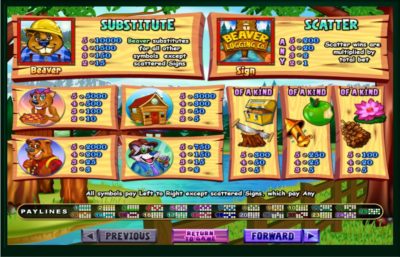 In addition to these two bonus games, there are also two jackpots, Minor Jackpot and Major Jackpot that are progressive jackpots that 1.5% of RTP contributes to. Most importantly, the jackpots can be won on any bet size so it there’s no need to play maximum bet, and they are awarded randomly, too. This means it’s best to play Builder Beaver with a minimum bet per spin in order to get as many spins – and chances to win the jackpot – as possible. The value of both jackpots is displayed above your reels.

Beaver Builder is a fun modern slot that will be enjoyed by classic slot fans as that’s how the game plays. But that’s only until one of two bonus features is triggered, and these can be quite rewarding and are also fun to play because of the different things that happen on your reels compared to the main game. This is a fun Microgaming slot machine and it deserves a few spins, if for nothing else then to see what the current Major Jackpot value is.

Builder Beaver is a 2012 Microgaming slot machine themed around beavers who are building a dam. You’ll enjoy two different versions of the free spins game, with 10 or 12 free spins!

Hurray! There is a competition going between users of our site!
You have to do nothing, but browse out site, and win a daily prize. Click here to read more.
You current ranking:
Time Left: 4h 1m 55s