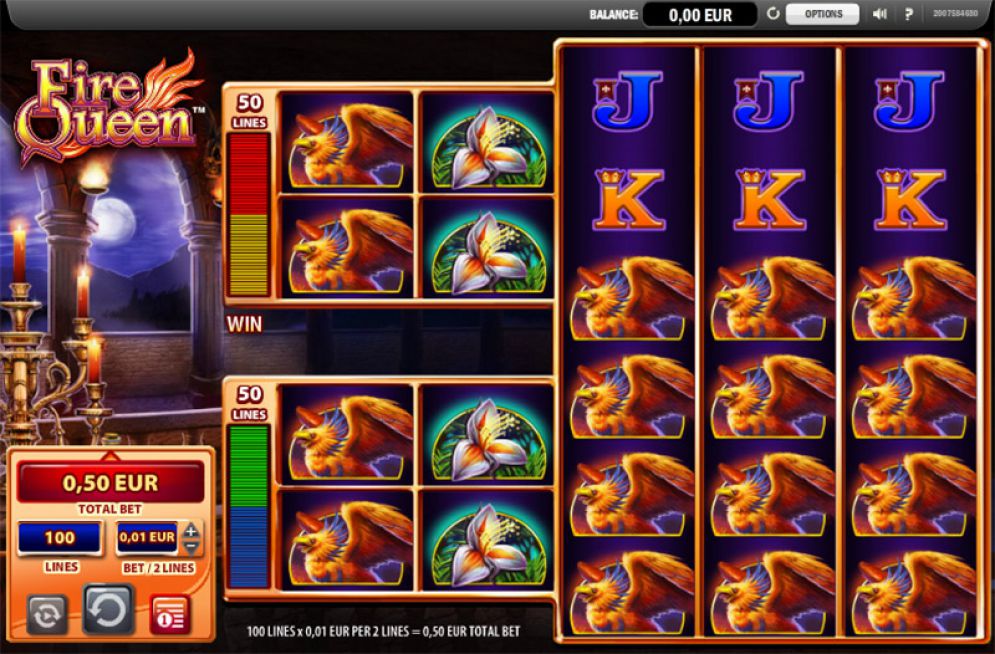 Fire Queen is an innovative classic slot by WMS, and you can play it online and in land-based casinos. It offers a large board with 26 symbols and 100 paylines! 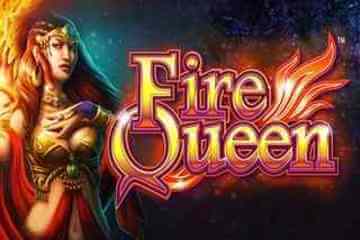 This game is so full of features, probably more than any other slot by this developer. I have been playing Fire Queen slot machine lately, and here is my honest review of this slot machine by WMS t(Williams Interactive) hat was released online in 2014. It’s not to be confused with the title of the same name by CQ9 Gaming that was released in 2018. Anyway, here’s what I think about this slot.

The game is played on a strange looking board and it’s nothing like anything else I’ve seen in slots. There are four small reels that are 2×2 symbols, and three gigantic reels that have six symbols each, for a total of 26 symbols. It’s still the same old five-reel experience when you look at it, because the game uses either one of mini reels to combine a winning payline with the three large ones, for a maximum win of five-of-a-kind. There are 100 paylines. On the three large reels, symbols may appear stacked, which will help you win on multiple paylines, and Wilds can be stacked on those reels too. 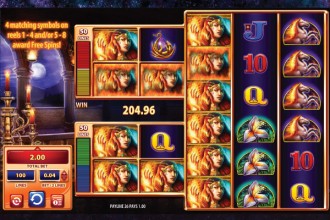 The game uses five card symbols which don’t pay much, and six symbols with artwork that are high-win symbols. These pay well, especially in case of two best symbols. In addition to these eleven symbols there’s also a Wild, and a Scatter that appears on the three large reels only. Wild is a special symbol as it will get copied between the two mini 2×2 reels. Once you look beyond the strange reel setup, this is essentially a classic slot game, but the reel setup gives you 100 paylines.

Theoretical return to player (RTP) is 95.95%, which some modern slot players may find a bit too little, but it’s actually great for a classic slot as it’s almost 96.00%. This makes Fire Queen superior to most other classic slots, and then there’s the innovative gameplay, too. Variance is high and this slot game wouldn’t be good any other way. 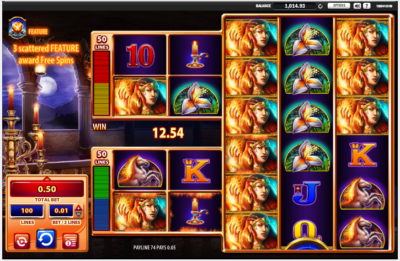 When you trigger the feature you’ll get 5 free spins in which any Wilds that appear on one of three large reels will expand to fill the entire reel they’re on. The best possible scenario is to trigger the feature by getting four of the same symbols on a mini reel, and that that symbol is the most powerful one, Fire Queen. Then that reel will be held and you can benefit greatly from expanding Wilds on large reels, you’ll get many winning paylines of the best symbol.

If both triggers happen at once, if you get four of the same symbol on a mini reel and also land three Scatters on the same spin, you won’t get only 5 free spins but you’ll get 20, and you’ll also get a cash prize of 100x your bet.

Fire Queen is an innovative game that retains the classic slot machine feel yet adds something new that creates fun and large wins, also giving you 100 paylines to work with. This is an excellent slot game that can pay really big, since the chance is there to land 100 paylines of Fire Queen symbol, which would be worth 800x your bet. This is helped by the facts that you Fire Queen symbol is stacked on three large reels, that Wilds are expansive on three large reels, and that if you land four Fire Queens on a mini reel they will be held. This is an excellent proposal and the slot machine can pay big, so go ahead and try this game out.

Fire Queen is an innovative classic slot by WMS, and you can play it online and in land-based casinos. It offers a large board with 26 symbols and 100 paylines!

Hurray! There is a competition going between users of our site!
You have to do nothing, but browse out site, and win a daily prize. Click here to read more.
You current ranking:
Time Left: 5h 12m 57s