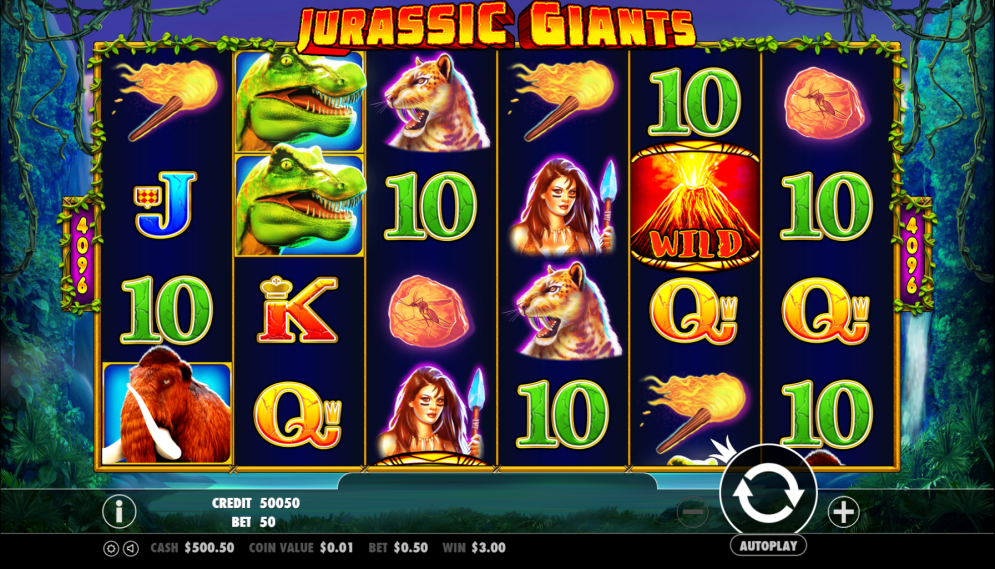 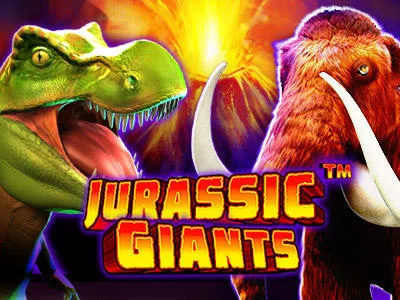 Jurassic Giants is a stunning slot game in which everything is bigger, and I have played it for a few hours in order to be able to write this review, and tell you what I think about the slot and what are its pros and cons. Theoretical return to player (RTP) is 96.01%, which is good enough, and the game feels like a classic slot because of the graphics, but is actually an innovative slot that does everything a bit different than the standard.

Graphics aren’t good. The five card symbols look like card symbols in any other classic slot game, which is alright, but the six main symbols are poorly drawn and are not even drawn in the same style. Mammoth and T-Rex are essentially cartoons, while Woman Hunter and Sabre-toothed Tiger are much more realistic. The sixth symbol is a Torch, and it’s not clear what symbol number five is. This is pretty poor, and it just barely depicts the intended theme. And then there are Diamonds. 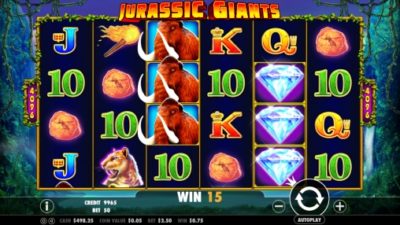 There are eleven symbols in the paytable, and five of these are low-value card symbols. Six symbols are the main ones, but they couldn’t be called high-value symbols as they pay only slightly better than the card symbols. Mammoth and T-Rex are the two best-paying symbols in the game, but in general you need to land a multi-payline win in Jurassic Giants if you want to win a decent amount of money. Without multiple winning ways, it’s just not possible. Symbols pay already for three-of-a-kind, and the best possible win is six-of-a-kind since there are six reels. In addition to these eleven symbols there is also a Wild that appears on four middle reels, and a Scatter that can appear of any position independently for a maximum number of Scatters of 24. 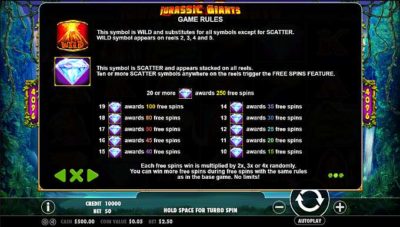 Not only that the number of free spins can be incredible, each free spin will randomly be given a multiplier of x2, x3 or x4, and finally, the free spins can be re-triggered. If you do get those 250 free spins, there’s a really good chance you will re-trigger the feature for some more. This is an incredible proposal and it’s something rarely or never seen in slots.

If you want to play a slot game which can deliver an incredible number of free spins, then Jurassic Giants is one of the best. Rarely can you get 250 free spins, or 4096 paylines for that matter. But when you remove the fact that everything is gigantic in this game, it’s essentially a classic slot that doesn’t have any special features. It’s a bare bones gameplay in which only a win multiplier during the free spins game is something out of the ordinary. This game isn’t for everyone, but if you liked what you read here, give it a go and see do you like it.

Hurray! There is a competition going between users of our site!
You have to do nothing, but browse out site, and win a daily prize. Click here to read more.
You current ranking:
Time Left: 1h 58m 22s
Gambling is for 18+ though some countries may have other restrictions...Remember you should always Gamble Responsibly
We use cookies to ensure that we give you the best experience on our website. If you continue to use this site you agree to allow us to use cookies, in accordance with our Terms & Conditions.Agree & Close