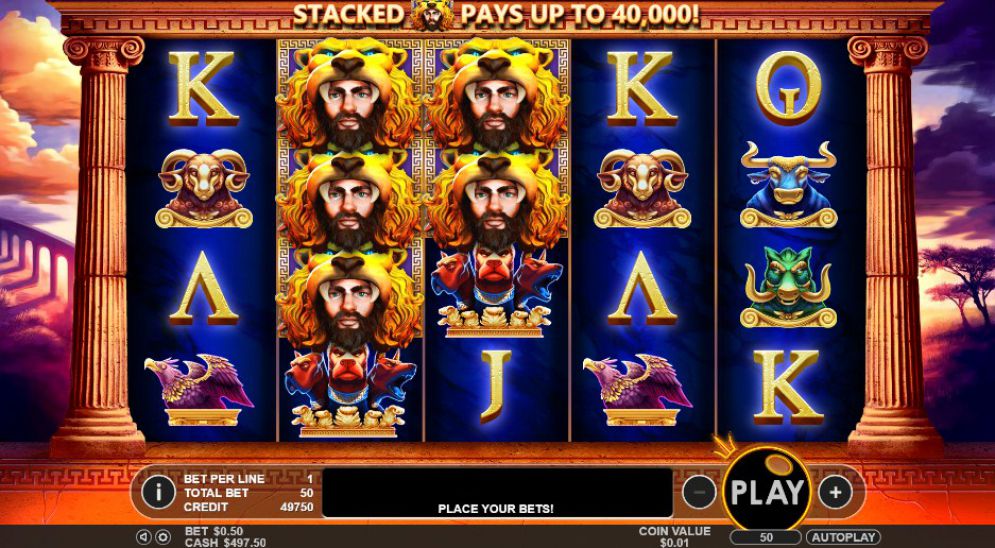 Hercules Son of Zeus is a modern classic slot with a Greek gods theme, and it was released in 2017 by Pragmatic Play. It’s a high variance game with unlimited free spins and a jackpot of 40,000 coins! 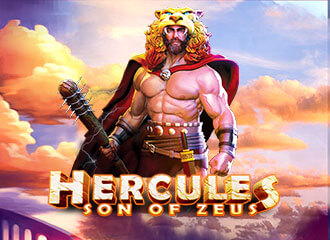 I have played Hercules Son of Zeus so let me give you my honest opinion about this slot. Hercules Son of Zeus is a modern classic slot that’s optimized for mobile play, and a high variance game that doesn’t have a really good theoretical payout but does provide you with a chance to win huge amounts of money. Graphics are quite good for a classic slot and the theme depicts various Greek deities and monsters, and the main sybmols are highlighted the way they should be. The theme will appeal to most classic slot players, and it must be noted that Hercules, the most powerful symbol in the game, appears stacked on the reels and is the only symbol that behaves in that way.

The game is played on a 5×4 board with 50 compulsory paylines, and the minimum possible bet is quite large, $0.50, which will put some people off, especially if they’re not sure if the game is paying well or not. The maximum bet is $250. The four card symbols are absolutely worthless, as you’ll need to land five-of-a-kind to either get your stake back or to double it, and for four- or three-of-a-kind you’ll get wins that are so insignificant that you’d rather if they didn’t happen at all so you can just quickly go on with another spin. Namely, for Queen or Jack you’ll get $0.04 for three-of-a-kind on a $1 bet. That’s pointless, and sadly this is one of those games that annoy you with those small wins. 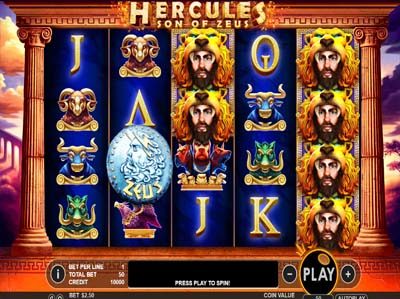 The six main symbols pay better, and the prizes for five-of-a-kind range from 3x to 16x your bet, and prizes for less than five of the same symbol are still not worth much. Two or more Hercules symbols pay, though 0.2x, but if you land a full board of them you’ll win 40,000 coins, which is the jackpot of the game. There is also a Wild symbol and a Scatter that appears on reels 2, 3 and 4 only and pays 2x your bet.

The free spins game in Hercules Son of Zeus will only give you 6 free spins, which is an indication that these free spins are quite powerful. Extra Wilds are indeed added on every spin, and the free spins are actually unlimited. Before every spin, an extra Wild is added to the reel strips, and this doesn’t mean it’s certain you’ll land more Wilds, but you just might. Also, reel strips are different than those used in the main game, and are more rewarding. The free spins are unlimited because every single Scatter you land on your reels during the feature will prolong your game by one free spin, and there are no limits to the number of free spins you can get. The trick here is that the Wilds are being added more and mroe with every new free spin, so while in the beginning you won’t see any Wilds actually land on your reels, with 10+ free spins they will start to accumulate and will start producing big wins. With a lot of luck with landing Scatters during the feature, the number of Wilds on the reel strips can rise to ridiculous heights.

Hercules Son of Zeus is a simple game that targets classic slot players who enjoy high variance and a free spins game that is worth the wait. For that, you pay the price of having slightly low RTP, but classic slot players won’t mind as long as the maximum possible win is good enough – and we could say that 40,000 coins for a full board of Hercules symbols is a prize that’s good enough. The main appeal of this game, however, is the unlimited free spins game with a new Wild added before each spin.

Hercules Son of Zeus is a modern classic slot with a Greek gods theme, and it was released in 2017 by Pragmatic Play. It’s a high variance game with unlimited free spins and a jackpot of 40,000 coins!

Hurray! There is a competition going between users of our site!
You have to do nothing, but browse out site, and win a daily prize. Click here to read more.
You current ranking:
Time Left: 23h 59m 51s
Gambling is for 18+ though some countries may have other restrictions...Remember you should always Gamble Responsibly
We use cookies to ensure that we give you the best experience on our website. If you continue to use this site you agree to allow us to use cookies, in accordance with our Terms & Conditions.Agree & Close