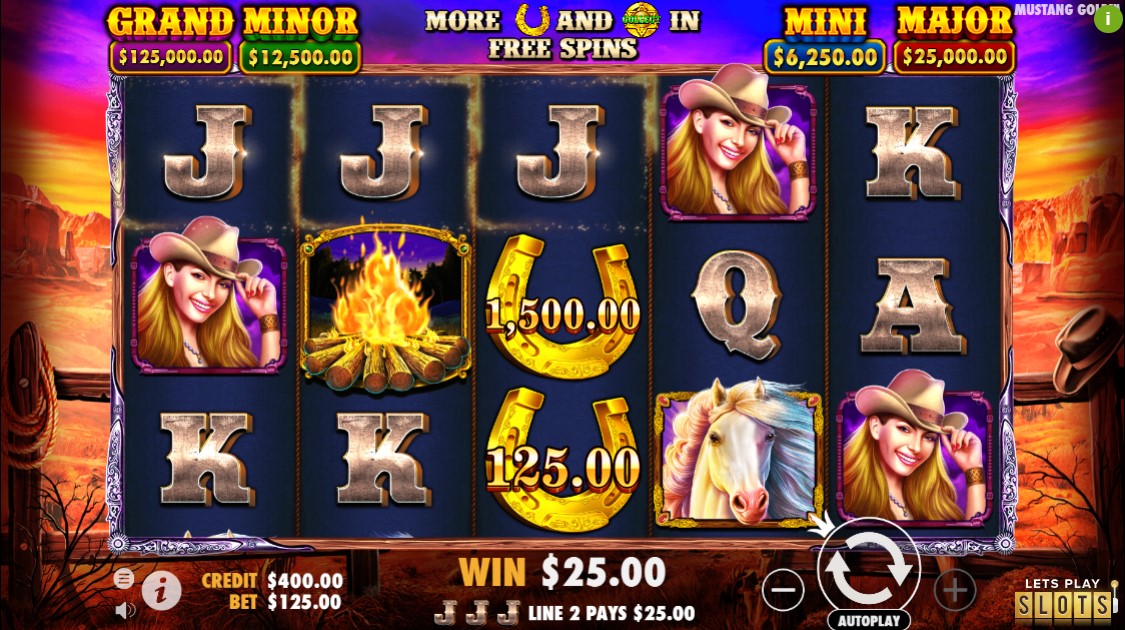 The cowboys and girls are in town, and they’ve brought their Mustang horses with them, too. In this Pragmatic Play slot called Mustang Gold, you get the chance to experience Wilds, Free Spins and even the chance at progressive jackpots. 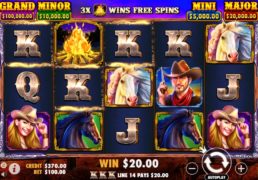 It’s always going to be the case that slot games with themes similar to several others will be compared. That’s exactly the case with Mustang Gold – I had a hard time not comparing the slot with several others that came before it. However, once I started playing it, it did stand out to me for being quite the appealing slot overall. Pragmatic Play provides some good graphics in the game, although the animations are fairly basic. Fortunately, a few other features also exist within. 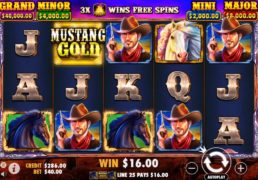 Accessing this slot will present you with a layout of five reels and three rows altogether. Joining this setup, the game features 25 pay lines to wager on, which has been fixed in place. You’re able to adjust your wager via the menu button in the bottom-left corner. This allows you to place a maximum overall wager of €125 per spin.

The imagery that appears on the reels is all very thematically relevant. Even the style of the A, K, Q and J symbols has been designed to look like it’s straight out of a Western. These can all pay out a maximum of €500. The next two icons are of a cowboy and a cowgirl, while the black horse symbol comes next. It is the white horse that is the highest paying standard addition in Mustang Gold though, able to reward you with up to €2,500. 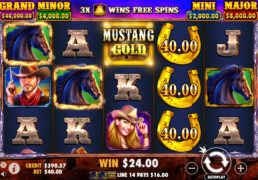 The game’s own logo appears as a symbol on its reels, acting as a wild symbol. This means that it will substitute for all other standard icons, helping you to create wins. Wilds can only appear on reels two, three, four and five.

The scatter symbol in this game is that of the camp fire. Scatters can show up anywhere on reels two, three and four, and still reward you with a win. If three of them show up at the same time, you’ll receive eight freespins as a reward.

You’ll also see symbols of a gold horseshoe on the reels, which appear on all but the fifth reel. They have a predetermined amount written over them or one of the progressive jackpot names. The “Collect” symbol is the only one that shows up on the fifth reel. If this appears at the same time as one of the golden horseshoes, the value of that is paid out.

Finally, the jackpot reveal game allows you the chance to win one of the four progressive jackpots in the slot. You just need to pick horseshoes from a screen and match three of the same to receive that corresponding jackpot.

Mustang Gold is quite a nice game from Pragmatic Play, I’d say. It contains some nice graphics to begin with, but it’s the progressive jackpot and freespins round that really make it that much more entertaining. All in all, it’s a nice addition to the collection from this developer.

The cowboys and girls are in town, and they’ve brought their Mustang horses with them, too. In this Pragmatic Play slot called Mustang Gold, you get the chance to experience Wilds, Free Spins and even the chance at progressive jackpots.

Hurray! There is a competition going between users of our site!
You have to do nothing, but browse out site, and win a daily prize. Click here to read more.
You current ranking:
Time Left: 6h 13m 30s