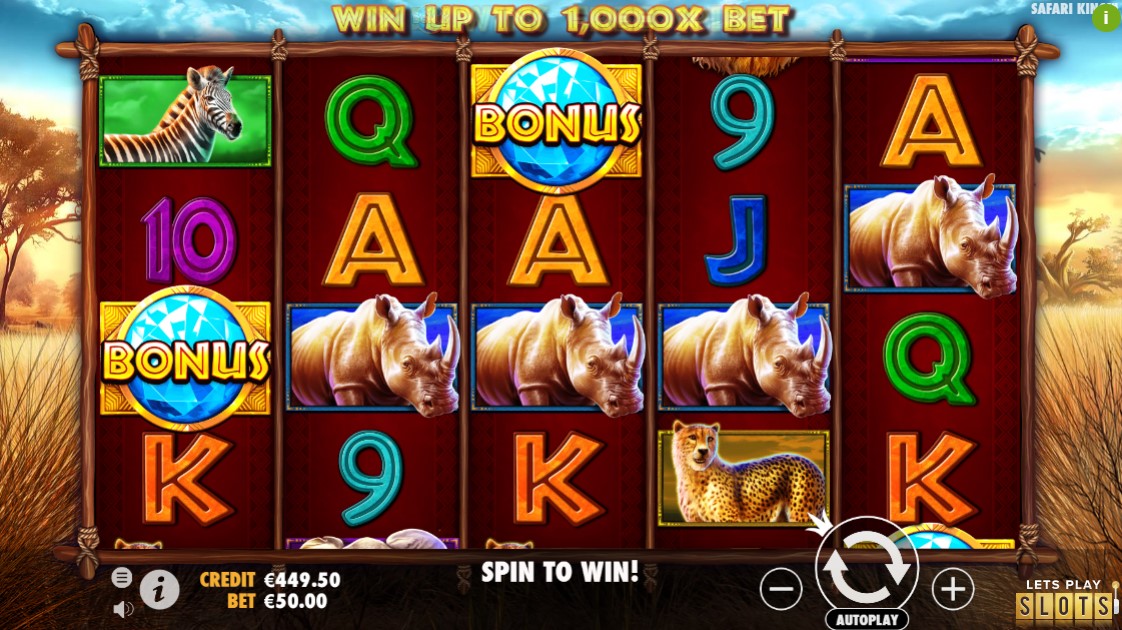 The big 5 animals of the African plains are waiting for you to arrive so you can see them on your safari tour. While you’re playing Safari King from Pragmatic Play, watch out for the arrival of Free Spins, Wilds and more.

I’m definitely an animal lover, and so whenever there’s a slot game released that focuses on the animal theme, the chances are that I’ll like it. Safari King from Pragmatic Play doesn’t deviate too far from other safari-themed slots, utilising all of the relevant animals as symbols on its reels. The developer makes sure to incorporate high-quality graphics as well, ensuring that you have a visually stunning experience when spinning its reels. I was happy to find a couple of additional inbuilt features as well. 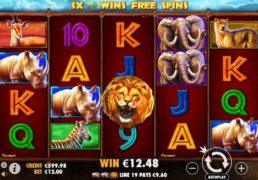 The setup that Safari King provides consists of five reels and four rows in total, while a set of 50 paylines have also been included in this layout. You’re not able to change the amount of active paylines, but you can alter your wager on them. The game provides coin value of between €0.01 and €0.50 to select from, while the number of coins in action per line are changeable between one and 10. This means that a maximum overall bet of €250 per spin is possible.

The background of the slot features some of the African wild lands that your safari will go across. Meanwhile, upon the reels, there are symbols of the standard playing card symbols first of all, which can pay out up to €2,000. Then comes the symbol of the impala, the zebra and the cheetah. The latter of these and the rhinoceros symbol can pay out up to €2,500. Finally, there’s the symbol of the elephant, which has maximum pay-outs of €5,000.

Safari King has its own wild symbol, too. This comes in the shape of the lion, and as a wild, it can substitute for all other standard symbols on the reels. The wild can only show up on reels two, three, four and five. 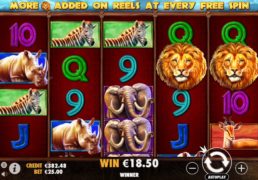 You’ll also be able to see a bonus symbol show up on the reels of this slot. It’s visible on the first, third and fifth reels, and if three of them come into view at the same time on these reels, it will quadruple your stake as a pay-out.

Additionally, if three of the bonus symbols show up, then the free spins round of the game also triggers. Special reels come into play during this round and before every spin, a single wild symbol is added to the second, third, fourth and fifth reels. They remain in place for the duration of the free spins feature. 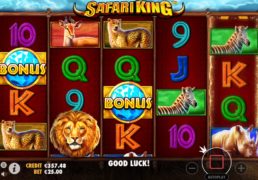 Safari Kind has some basic features included in its gameplay, but this didn’t make it dramatically less entertaining for me to spin the reels. I enjoyed the top-quality graphics and the overall theme, as well as how smooth the game spins. Overall, it’s an enjoyable offering from Pragmatic Play.

The big 5 animals of the African plains are waiting for you to arrive so you can see them on your safari tour. While you’re playing Safari King from Pragmatic Play, watch out for the arrival of Free Spins, Wilds and more.

Hurray! There is a competition going between users of our site!
You have to do nothing, but browse out site, and win a daily prize. Click here to read more.
You current ranking:
Time Left: 14m 22s