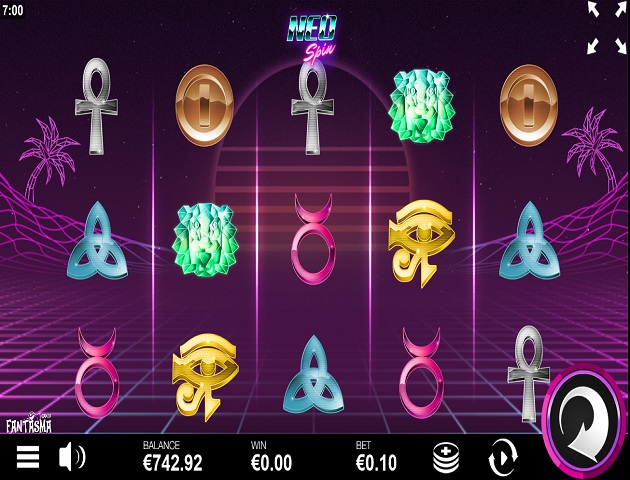 Neo Spin is a simple slot game with 10 paylines that pay both ways, and sticky Wild re-spins in which you can win up to 250x on one spin! This slot seems very basic but offers many interesting winning combinations. 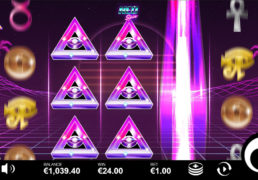 Neo Spin is a Leander Games slot machine that was released just before the end of 2018, and it’s a simple slot game that has a good theoretical payout and a paytable that’s dominated by two powerful symbols. There’s also the re-spin feature which isn’t as lucrative as you might expect. I’ve played Neo Spin for a few hours in order to be able to give you a detailed review of this Leander Games release, and this is what I’ve found out.

The game has 10 fixed paylines on the 5×3 board, but the paylines pay both ways so you actually get 20 for the price of 10. The minimum bet per spin is €0.10 while the maximum is €50. The paytable is an interesting one, as it has five symbols that pay from 2x to 5x your bet for five-of-a-kind but also offer relatively good wins for four- and three-of-a-kind that won’t leave you disappointed, and then there are two powerful symbols. The first one pays 12x for five-of-a-kind, and the other one pays 25x for five-of-a-kind and, interestingly, only a bit less, 20x, for four-of-a-kind. This is a rare slot game that pays well for four-of-a-kind, and therefore many players will enjoy it, as it doesn’t take a five-of-a-kind win to win big, you can achieve a similar result with four symbols in Neo Spin, which greatly simplifies things. 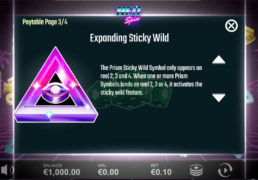 The Prism Sticky Wild only appears on reels 2, 3 and 4. Whenever it lands on a reel, it will expand to fill that entire reel and will then grant a re-spin of the other reels. If another Prism Sticky Wild happens to land during the re-spin, the new Prism will stick and another re-spin will be awarded. Of course, all previous Prisms will also stick until there are no new Prisms that appear. This is a typical sticky Wild re-spin feature we’ve seen many times before, with a key difference that Wilds only appear on middle three reels so you can’t get a full board win with this, the maximum number of re-spins is two, and most of the time you will only get that first re-spin and nothing else. The first win is multiplied by x2, the second by x3 and the third by x4. 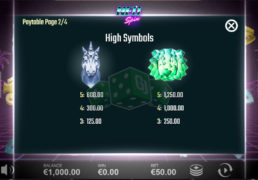 Theoretical return to player (RTP) is healthy 96.70%, which is very good, and you may want to play this slot game for that alone. The bonus feature isn’t that rewarding and can only issue a nice payline win or a multi-payline win, so basically most of this payout is available in the main game, without the need to trigger any features. The two powerful symbols are the ones you want to see on your board, but not even these offer incredible wins. This is a difficult game to master, but experienced players will know how to use this high theoretical RTP.

Neo Spin is mostly a very basic game without many features, and as such it will be played by those players who want this kind of bare bones experience and who dislike flashy bonus features. Since the RTP is very good, it makes sense to play this slot if you fit in this group of players. Most others will find the game unappealing due to its lack of features. But as far as simple games go, Neo Spin is a good one. It pays well, it looks good, and after a few dozen spins it will draw you in and you’ll see the beauty of playing a simple game.

Neo Spin is a simple slot game with 10 paylines that pay both ways, and sticky Wild re-spins in which you can win up to 250x on one spin! This slot seems very basic but offers many interesting winning combinations.

Hurray! There is a competition going between users of our site!
You have to do nothing, but browse out site, and win a daily prize. Click here to read more.
You current ranking:
Time Left: 17h 57m 37s