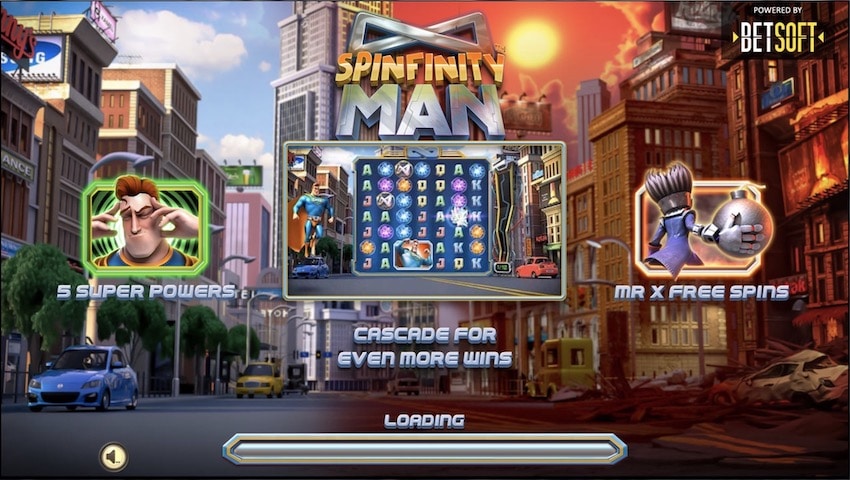 Spinfinity Man is a falling blocks game that’s played on a 7×7 board and that offers five special features that can get activated when Spinfinity Man symbol lands, and there’s also a free spins game that has its own five features.

This game is played on a huge 7×7 board and there are no paylines, as clusters generate wins and you need a minimum of four symbols in a cluster to land a win. Bet per spin can range between €0.10 and €10, which isn’t a huge range, but since the game doesn’t pay very often few players could afford to bet more than €10 per spin anyway. There is an Autoplay feature if you want to speed the game up a bit. 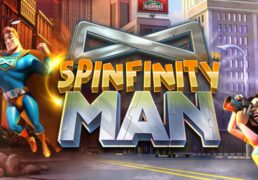 When you land a cluster of 4 or more symbols, the wins will explode and new symbols will drop into place, giving you a chance to win again. The game has a total of eight normal symbols plus a Super Wild. The card symbols pay up to 3x your total bet for clusters sized 8 symbols or more, and the three mid-value symbols take this up a bit to 3.50x or 4x your bet. The Diamond symbol is the single high-value symbol and it will pay 2.40x for the smallest cluster already, with a maximum prize of 9x.

With each cluster explosion, Fan Girl will get more excited, and when you form 5 or more clusters on a single spin the Fan Girl Feature will be activated, and a random number of symbols will explode and will get you some nice instant wins. 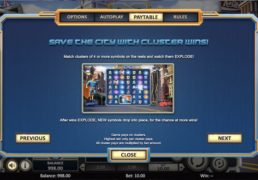 When a Mr. X symbol appears on the reels, it will advance the Villain Trail and then disappear, which will allow additional symbols to take its place. The Villain Trail has 10 positions and you’ll see it on the right of your reels. When you complete the Villain Trail you’ll activate the free spins bonus round and will get 10 free spins during which the Spinfinity Man will become Mr. X and will introduce five new bonus features that do the same as the five Spinfinity Man features, except they have different names. Also, whenever you land a Mr. X symbol during the free spins you’ll get an additional free spin.

Theoretical return to player (RTP) of Spinfinity Man is 95.80% so Betsoft once again failed to produce a high-payout slot game, though this is good for their standards and isn’t far off 96%, which is a standard value these days, either. The game doesn’t pay very often, so you won’t even get those small wins very often, but the game does offer a route towards big wins, and you’ll get there when you start forming consecutive winning clusters and when the special features get activated. The game seems to have high variance.

This is a high variance game that you should have a plan for, and it does award persistent players as it takes a lot of spins to trigger all the best bonus features. The game can pay well, but it takes a bit of an effort to get there eventually. What’s good about this game is that you can predict when you’ll trigger the free spins since Villain Trail is predictable, which gives you an additional edge over the game. Spinfinity Man is a quality slot game and you’ll find it in all Betsoft casinos, where you can play for real money.

Spinfinity Man is a falling blocks game that’s played on a 7×7 board and that offers five special features that can get activated when Spinfinity Man symbol lands, and there’s also a free spins game that has its own five features.

Hurray! There is a competition going between users of our site!
You have to do nothing, but browse out site, and win a daily prize. Click here to read more.
You current ranking:
Time Left: 2h 51m 4s