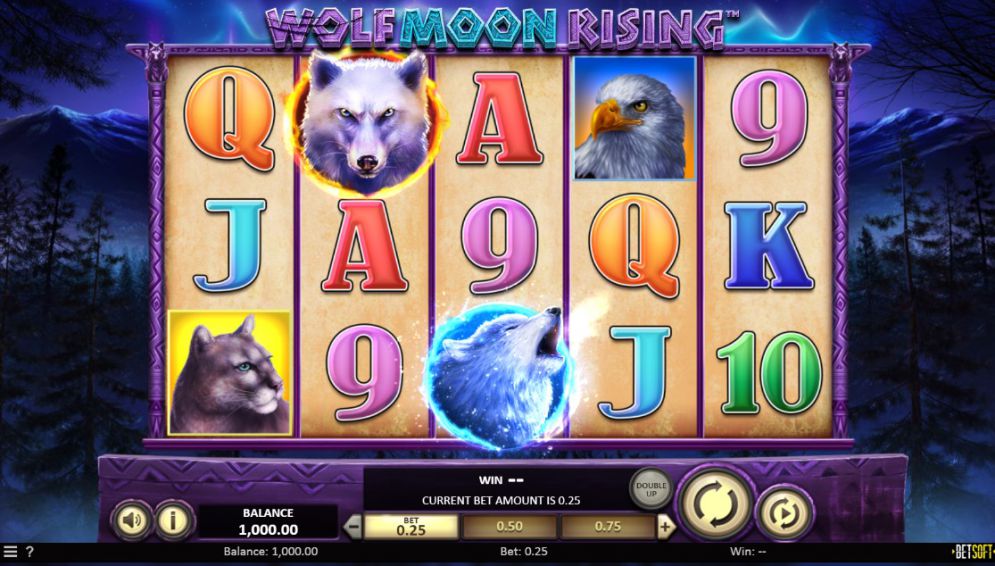 Wolf Moon Rising is a classic slot game by Betsoft which does everything a classic slot game is supposed to – it has high variance and the free spins game pays both ways and doubles all wins. This lets you profit from a very good paytable, and the RTP is good too, so this game is a great choice if you want to play a classic slot with modern framework and graphics.

The game has 25 fixed paylines on a standard 5×3 board, which is good for you as you do want as many paylines as possible, to make more money when you finally land that full board win. There are no coins in this game, as the paylines are fixed and Betsoft decided to simplify the process. In fact there are only eight bet levels available as bets range from €0.25 to only €5 per spin. This game is meant to be played in longer playing sessions. 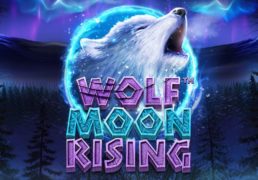 This is a classic high variance game so it’s expected to see high wins in the paytable, as we already know that the frequency of wins will be low. Even the card symbols – six of them – will be able to pay at least 4x your total bet, though this will happen only when you land five-of-a-kind. But you’ll get at least a portion of your stake back for three-of-a-kind, which is nice. The game also has several symbols that pay already for two-of-a-kind, which helps ease the tension as you wait for that bigger win.

The three medium-value symbols are exactly that, better versions of the card symbols. Buffalo, Cougar and Eagle pay 10x, 10x and 16x for five-of-a-kind respectively. And then it gets much better with high-value as the two Wolf symbols pay 300x your bet for five-of-a-kind while five Wilds pay whopping 10,000x your bet. In addition to this, each Wolf Moon symbol on your board instantly pays 1x your bet.

This is still very much a high variance game, but these small things like the 1x prize from Wolf Moon help you feel as if the experience isn’t as tight as it would have been without these tiny bits of help. 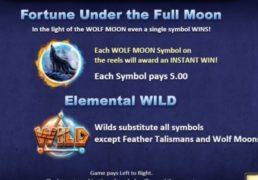 Mystical Feather is the Scatter, and it pays 5x, 20x and 100x for three, four or five Scatters respectively. You need at least three, and you’ll be given 12 free spins where 25 paylines pay both ways so you actually get 50. This is a great way to take advantage of that generous paytable, and you can expect lots of cash in the free spins game. Not only that the paylines pay both ways, but all wins are doubled! Five-of-a-kind win pays one way only, of course, but the win is doubled.

Theoretical return to player (RTP) is 96.00%, which is actually plenty for a classic slot game that has high variance and 25 paylines, so all classic slot fans would be advised to play Wolf Moon Rising. There’s no RTP lost on meaningless bonus features so what you see is what you get – the good paytable and a free spins game that lets you take full advantage of it. This is the perfect scenario for a classic slot game and Wolf Moon Rising doesn’t steer away from it one bit.

Wolf Moon Rising should be played by any player who wants a game that keeps all its riches in the free spins feature. That’s precisely what this game does, and it’s what classic slot players expect. The free spins feature is very powerful and when you trigger it you’ll feel as if you won the game. Do find a Betsoft casino and play Wolf Moon Rising for real money because this game can pay huge prizes.

Wolf Moon Rising is a classic slot game by Betsoft which does everything a classic slot game is supposed to – it has high variance and the free spins game pays both ways and doubles all wins. This lets you profit from a very good paytable, and the RTP is good too, so this game is a great choice if you want to play a classic slot with modern framework and graphics.

Hurray! There is a competition going between users of our site!
You have to do nothing, but browse out site, and win a daily prize. Click here to read more.
You current ranking:
Time Left: 8h 42m 14s