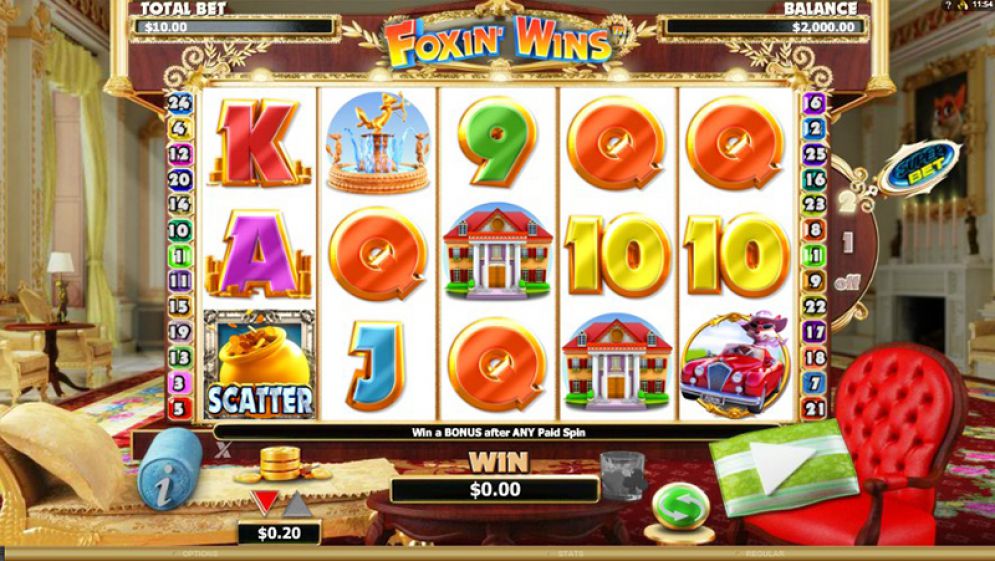 Foxin’ Wins is a fun slot game by NextGen in which Fox Pups bring Wilds to your reels, and during the free spins game they get excited and you get even more Wilds! 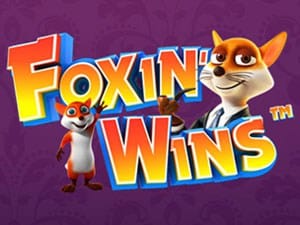 This slot game is by a small developer and it was released back in 2013, but still I feel it shouldn’t be overlooked, and there’s a reason to play it even today. In fact, the slot game was so popular that a sequel, Foxin’ Wins Again, was released the next year. I’ve played this slot machine for a few hours in order to be able to give a detailed review and identify the good and bad things about Foxin’ Wins.

First of all, it’s a cute game that uses Fox Pups to keep you playing, both because they’re cute and because they can produce multiple Wilds on the same spin. The main appeal of this game comes from the theme, which most players like, and the chance of landing five Wilds.

The game is played on a 5×3 board with 25 fixed paylines. Foxin’ Wins lets you play the normal game in which the price is 25 coins for 25 paylines, and in this case your theoretical return to player (RP) will be 95.223%, a bit low. In this case you’ll only have one Fox Pup on reel 3 that can randomly turn into a Wild symbol. If you want to add Fox Pups to reels 2 and 4 as well, the price for that is 35 coins and the theoretical payout rises to 95.33%. If you want Fox Pups on all five reels you’ll pay 50 coins, but will get a chance to land a Wild on reel 1, which is always the most valuable Wild in any game that pays left to right. In this case, your theoretical payout will be 95.618%. All these values are not that great, but the third option at least gets close to 96.00%. 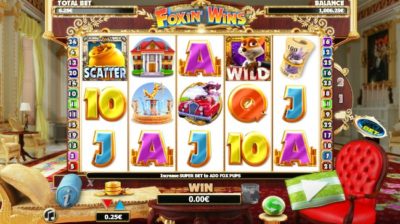 The game is difficult to beat as it doesn’t offer the potential of some huge win. There are six card symbols which don’t pay very much though they aren’t poor either, and two more symbols have artwork but can also be considered low-paying symbols. That leaves us with two quality symbols, Car and House, worth 1000 and 500 coins for five-of-a-kind respectively, while the remaining symbols all pay between 250 and 100. Only with numerous Wilds it’s possible to get a substantial win in Foxin’ Wins. The game says it’s possible to win up to 2,500,000 coins, but that’s a stretch and the game doesn’t really have that high variance feel to it. 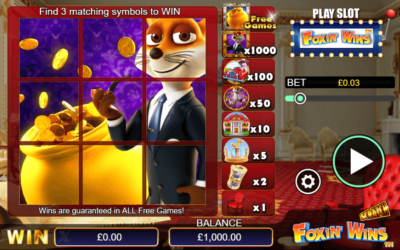 When you land three Scatters you’ll get 10 free spins with all wins doubled. This is where your decision about the number of Fox Pups and the price you pay will matter the most, as during the free spins game Fox Pups get all excited so they appear more frequently. You do want to have five excited Pups as opposed to only one. With five, you’ll get plenty of Wilds during the free spins and this is your chance to win big. Since Wilds are more common, you’ll get more winning paylines, and there’s a chance of landing multiple winning paylines of some high-value symbol such as Car or House. You can also manipulate your bet and number of Fox Pups if you think it will benefit you, for example, playing with only one Fox Pup after you played the free spins game and then increase that to five Fox Pups when you think it might be time for the feature to get triggered again.

Foxin’ Wins is a fun game to play because of those Fox Pups that produce Wild symbols, and the game is infinitely more interesting if you play with five Pups. These animals are cute and they bring wins, so this makes Foxin’ Wins a fun slot playing experience. Players who enjoy cute slots with fun and careless gameplay will enjoy this one, while more serious players will likely stay away because of the low theoretical payout and few chances to win big. Players either love or hate this slot, go ahead and play it and see which camp do you belong to.

Foxin’ Wins is a fun slot game by NextGen in which Fox Pups bring Wilds to your reels, and during the free spins game they get excited and you get even more Wilds!

Hurray! There is a competition going between users of our site!
You have to do nothing, but browse out site, and win a daily prize. Click here to read more.
You current ranking:
Time Left: 5h 35m 49s
Gambling is for 18+ though some countries may have other restrictions...Remember you should always Gamble Responsibly
We use cookies to ensure that we give you the best experience on our website. If you continue to use this site you agree to allow us to use cookies, in accordance with our Terms & Conditions.Agree & Close