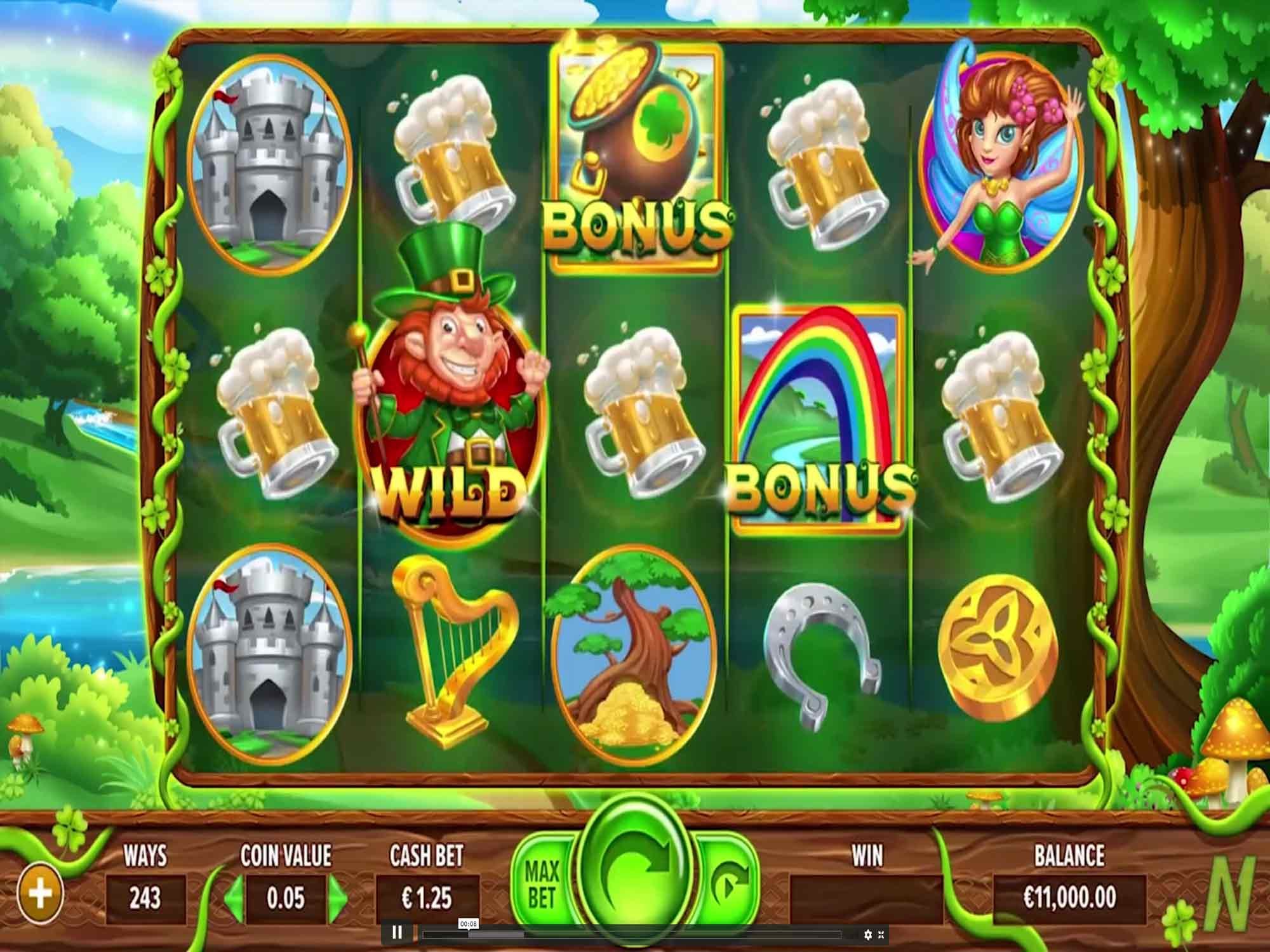 There’s a standard five-reel, three-row layout on display in Leprechaun’s Loot, but it also has 243 ways for you to win, too. Alongside this interface, the game incorporates one or two special features, such as the Pick & Click round and the Rainbow Path with multipliers.

Who doesn’t love an online video slot that surrounds the Irish theme? Yes, I know it’s been done by just about every software developer in at least one of their games, but honestly, it’s one of those old faithful themes, I think. That’s why it’s always quite nice to find another developer has taken it upon itself to create a game within the same genre. NetGaming is responsible for the creation of Leprechaun’s Loot, and it does serve as an exciting slot from this company. Featuring bold colours, enthralling gameplay and an enticing set of special features, I found myself thoroughly gripped by it. When you access Leprechaun’s Loot, you’ll certainly find it to be a very thematic game. The background depicts what is most likely an Irish forest, which is lush with greenery and features a stream running through it to add to the tranquil image it’s trying to display. As far as the game’s symbols are concerned, these are made up of a variety of things that people relate to Ireland and its folklore. Therefore, you can expect to see a leprechaun’s wooden pipe, a golden harp, a silver horseshow, a tankard of beer, a golden coin and even a medieval castle as well.

I found the standard layout to be quite nice as well, with there being five reels and three rows on display for you to play on. The game also includes a set of 243 ways for you to win, which is another great perk of it. You’re able to easily change your bet with the arrows at the bottom of the game screen, while an autoplay button is also present for you to utilise if you wish. Furthermore, while you’re spinning the reels, the leprechaun in question can show up and provide you with wild features. When you combine all of these perks together, the base game can be quite exciting within itself. 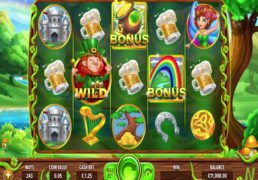 I’m always pleased when I discover online slots that have intriguing inbuilt features, and Leprechaun’s Loot is one such game. NetGaming has made sure to add two bonus rounds into the game to make it even more appealing overall.

The first of these is known as the Rainbow Path Multiplier round. You’re able to activate this by spinning three or more of the rainbow bonus symbols into view in any position on the reels. Doing so will present you with a pathway that is made up of rainbow-coloured tiles. To the left is a wheel for you to spin and you will either land on a 1, 2, 3, 4, 5 or 6 space, or a Collect space. If you land on one of the numbers, you advance along the path, where multipliers increase in value. Once you land on the Collect space, you will collect the multiplier of the tile you’re on, which will apply itself to your bet from the triggering round. This round gives you the chance to win up to 200x your in-play bet!

The second special feature of Leprechaun’s Loot is the Pick and Click Pot of Gold round. This activates whenever three or more of the bonus pots of gold symbol come into view anywhere on the five reels. In this round, the leprechaun appears in the middle of the screen and six pots of gold surround him. You simply need to select one of those pots to win a prize from it. Simple as that!

I was actually quite surprised to find that Leprechaun’s Loot has an RTP rate of just 95.74%. Considering that I found it paying out on a fairly frequent basis, that doesn’t seem to suggest a lower-than-average RTP.

If I was to take a collection of all of the online slots with the Irish theme as their basis, then I’d say that Leprechaun’s Loot would probably end up as being one of the games that comes in slightly above average. While it’s not the greatest slot ever within this category, it does have some entertaining features for you to activate. I very much like the Rainbow Path Multiplier round, and with the addition of the wilds and the Pick & Click feature, everything comes together to form a compelling online video slot from NetGaming.

There’s a standard five-reel, three-row layout on display in Leprechaun’s Loot, but it also has 243 ways for you to win, too. Alongside this interface, the game incorporates one or two special features, such as the Pick & Click round and the Rainbow Path with multipliers.

Hurray! There is a competition going between users of our site!
You have to do nothing, but browse out site, and win a daily prize. Click here to read more.
You current ranking:
Time Left: 9h 51m 35s
Gambling is for 18+ though some countries may have other restrictions...Remember you should always Gamble Responsibly
We use cookies to ensure that we give you the best experience on our website. If you continue to use this site you agree to allow us to use cookies, in accordance with our Terms & Conditions.Agree & Close