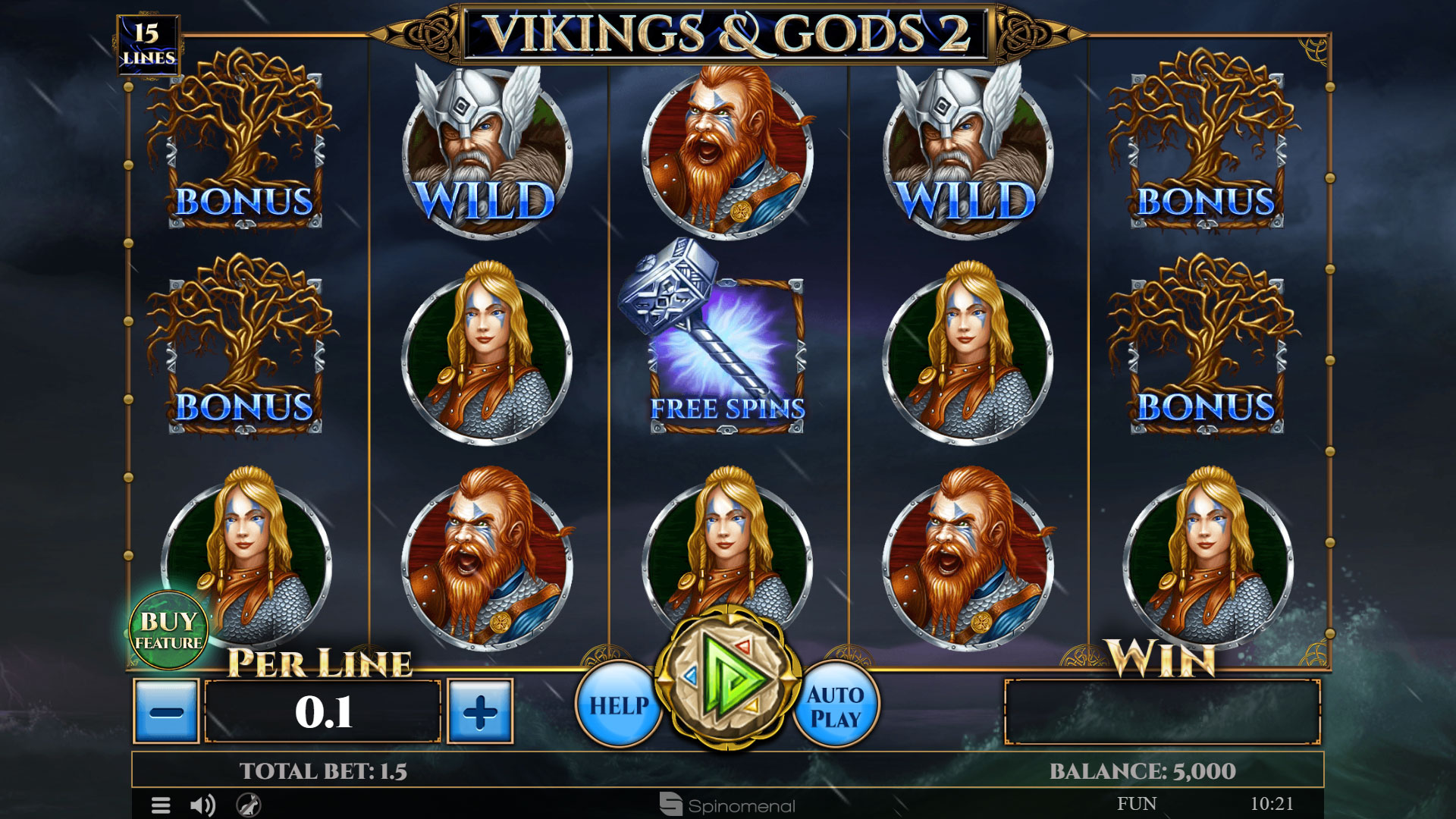 Vikings & Gods 2 – 15 Lines is an August 2019 release by Spinomenal that builds on the main game released in April and reduces the number of paylines from 50 to 15 to end up with an improved game.

The game is played on a 5×3 board with 15 fixed paylines, while the original title that had 50. This means the variance is perhaps a bit higher, and that more of your total bet goes towards a single payline you won on. The minimum bet per spin is €0.15 while the maximum is €150, so that’s quite a range to work with and players from all backgrounds will be able to play the game. 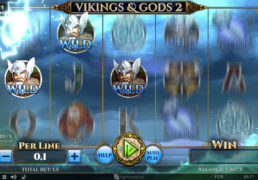 While the reels are spinning, between 4 and 7 Wild symbols may randomly appear on the board and greatly increase the chances to win. If you land 7 Wilds, then almost half of your board would be populated with them. Wild is a paying symbol, but only if you land five of them on a winning payline, and you’ll get 200x your line bet.

There are nine normal symbols in the game, plus three special symbols, for a total of 12. The four main symbols pay between 140 and 200 coins for five-of-a-kind, and between 100 to 160 coins for four-of-a-kind, which is definitely interesting to see. In this game, you don’t need to look further than four-of-a-kind wins as another symbol won’t add many coins.

Same is true for five card symbols, and prizes are decent, though for three-of-a-kind they are negligible, between 5 and 20 points. 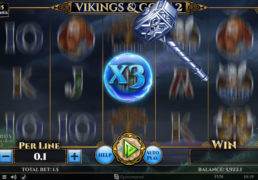 During the free spins feature, after each win a re-spin will be triggered and all reels will move one row down, allowing a new row to be revealed at the top of the board. The re-spin may be re-triggered if you land another win. This essentially gives you much more than 15 free spins as you’ll probably get at least 5 more re-spins during the feature. The free spins feature may be purchased for 30x your desired bet per spin – and it’s not even a bad choice. It’s probable you’ll end up with a profit.

The Bonus game is a fun one as you first click the Compass to start your journey through four locations with secret treasures. You’ll win coin prizes.

Theoretical return to player (RTP) is 95.67%, which is decent. The other mythology games pay similar percentages, Vikings & Gods 2 is probably better than most. Better than the original Vikings & Gods 2 at least, as that one has 95.13%. So, if you’re a fan of such slots, this game is the right choice. There are plenty of bonus features that can shower you with big wins, and this game seems looser than the RTP would indicate. Variance seems to be medium and the game doesn’t offer some mega win but plenty of decent ones and some big ones.

Vikings & Gods 2 – 15 Lines is a good game, definitely better than the original title from five months earlier, as the balance of the game is better. Still, players who play mythology slots usually expect a chance of a huge win but that isn’t present here in this game, so this is an option for those who would want to play a mythology slot sans the high variance. If that’s you, then go ahead and play this game for real money. Risk is low as the game returns your stake often.

Vikings & Gods 2 – 15 Lines is an August 2019 release by Spinomenal that builds on the main game released in April and reduces the number of paylines from 50 to 15 to end up with an improved game.

Hurray! There is a competition going between users of our site!
You have to do nothing, but browse out site, and win a daily prize. Click here to read more.
You current ranking:
Time Left: 21h 53m 18s