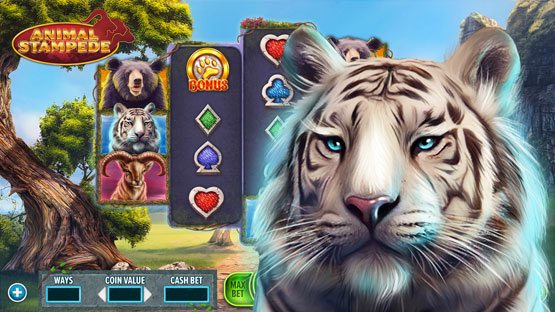 Visit the plains of Africa with this online video slot from Dragon Gaming. Animal Stampede utilises a unique five-reel and 3x4x5x4x3 row interface, whilst also introducing a set of five Free Spins to users who manage to spin three or more bonus symbols into view anywhere.

I can say with 100% honesty that I love animals. They’re often much friendlier and loving than many people are. That’s why whenever I find that a slot developer has released a game with animals as its theme, I’m almost instantly happy. Animal Stampede from Dragon Gaming is one such slot, featuring a nice collection of creatures on its reels. That’s not the only part about this game which makes it so appealing, though. When you also consider the fact that it utilises a wonderful layout and inserts one or two special features into gameplay as well, it stands out amongst the masses. 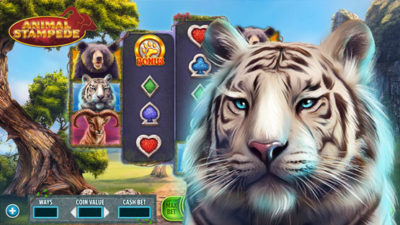 When I accessed Animal Stampede for the first time, I have to say that I thought the layout was exceptionally appealing. After all, it maintains the five reels that video slots have become synonymous with, but then makes things better with its selection of rows. These are set up in a 3x4x5x4x3 layout, creating a diamond-like shape on the screen in front of you. It’s because of this that Animal Stampede really stands out from the very get-go.

You’re able to customise your bet in the game by using the arrow buttons on display at the very bottom of the reels. Meanwhile, an autoplay function gives you the option of being able to set the reels of spinning several consecutive times at the same bet level without needing to press the Spin button each time. The symbols that appear on the reels of the game come in various forms, with the first ones being of playing card suits, such as the green diamond or the red heart. Then, a few animals can also be seen in play, including the white tiger and the antelope. So, it’s quite the thematic slot game, with the background also featuring rich graphics that almost transport you to the African plains.

While you’re spinning the reels of Animal Stampede, you may also find yourself activating one or two bonus features. These definitely enhance the overall game, starting with the inclusion of a Free Spins round. So, how is it possible to activate this? Well, you need to spin at least three of the game’s bonus symbols into view in order to set them in motion. Doing so will reward you with five Free Spins in total, and the bonus symbol of this game is represented by the animal’s paw print.

You may also find that a wild symbol is present on the reels of the slot. This one can help you with forming winning combinations, which it does by substituting for all of the standard symbols on the reels. Spin this one into view and you could find yourself creating multiple wins in one go, making this quite the lauded-after symbol.

It’s nice to see that the game comes with an RTP percentage of 95.94%, although this isn’t quite as high as many other online slots. That being said, I still found myself spinning several winning combinations into view on the reels, which could also be thanks to the fact that Animal Stampede has a medium volatility level.

Overall, everything really comes together perfectly in this slot game. From the inclusive graphics and animations through to the addition of special bonus features, Animal Stampede is one of the most exciting slot games from Dragon Gaming, in my opinion. I’d certainly allow myself to be transported to the African plains if it meant that I got to watch beautiful animals as the ones in this game stampede down the hillside!

Visit the plains of Africa with this online video slot from Dragon Gaming. Animal Stampede utilises a unique five-reel and 3x4x5x4x3 row interface, whilst also introducing a set of five Free Spins to users who manage to spin three or more bonus symbols into view anywhere.

Hurray! There is a competition going between users of our site!
You have to do nothing, but browse out site, and win a daily prize. Click here to read more.
You current ranking:
Time Left: 15h 53m 17s