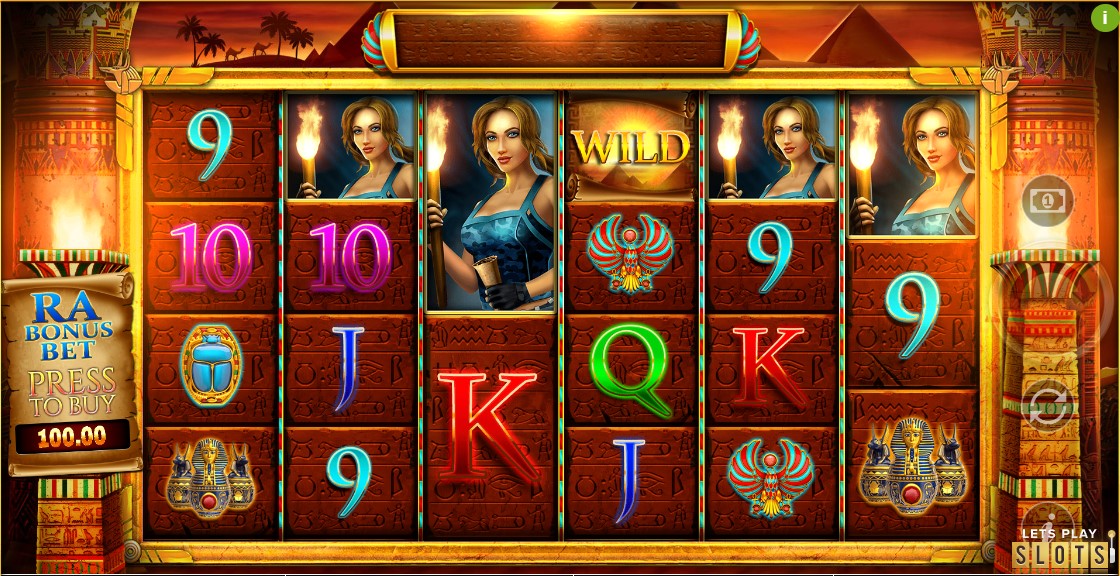 It’s time to travel to Ancient Egypt with this Blueprint Gaming offering. While you’re spinning the reels of Legacy of Ra: Megaways, you have the chance to win in up to 15,625 ways, whilst also experiencing Wilds, Free Spins and more.

It’s true to say that slot games centred around Ancient Egypt are quite a dime a dozen. So, whenever I see a new one with this theme, I’m usually likely to roll my eyes and pass it off as another attempt at topping several others with the same background. Fortunately, I took the time to check Legacy of Ra: Megaways out by Blueprint Gaming – mainly because it’s a Megaways game, but also because it’s a Blueprint offering. Needless to say, I wasn’t disappointed. 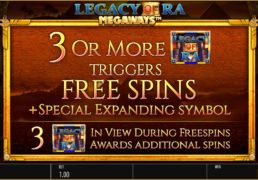 There are six reels available to spin in this slot, while a total of four rows are also in play. Across this layout, you have the opportunity to win in up to 15,625 different ways on every spin. While this isn’t something that you can change, the bet that you bring into play can be. Blueprint has given you the chance to select from wagers between €0.10 and €10 per spin.

Being a Blueprint Gaming slot, I knew that I was always going to be happy with the visual side of Legacy of Ra: Megaways. It doesn’t disappoint, featuring rich graphics and intriguing symbols. The first of these come in the form of the playing card icons from 9 to A. Then there’s the symbol of the scarab beetle, which can reward you with up to 2.5x your stake. The same is true of the sarcophagi, while the Phoenix representation offers maximum pay-outs of 5x your stake. The female explorer is the game’s highest-paying standard symbol though, providing up to 25x your bet as a pay-out. 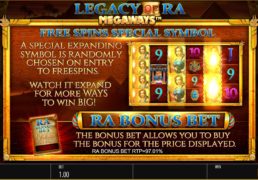 You’ll also get to see some special features come into play in Legacy of Ra: Megaways, starting with the wild symbol. This one will substitute for all other icons on the reels, except for the slot’s own logo.

Speaking of the logo symbol, this one operates as a scatter addition. Three or more of these coming into view anywhere will activate the free spins round, which also features a special expanding symbol throughout. Depending upon how many scatter symbols are in view, you can receive up to 50 of them initially, while the appearance of extra scatters during the feature will add more to your total.

As far as the expanding symbol is concerned, this will randomly be chosen prior to the free spins round starting. Whenever this appears, it will expand across the entire reel to provide you with the chance of earning higher, better wins!

There’s little doubt that a Megaways slot game is always going to appeal to me whenever one is released. Blueprint Gaming ensures that Legacy of Ra stands out for all the right reasons, from its impressive graphics through to the inbuilt special features as well. It’s certainly one to go for at your favourite casino.

It’s time to travel to Ancient Egypt with this Blueprint Gaming offering. While you’re spinning the reels of Legacy of Ra: Megaways, you have the chance to win in up to 15,625 ways, whilst also experiencing Wilds, Free Spins and more.

Hurray! There is a competition going between users of our site!
You have to do nothing, but browse out site, and win a daily prize. Click here to read more.
You current ranking:
Time Left: 6h 12m 58s