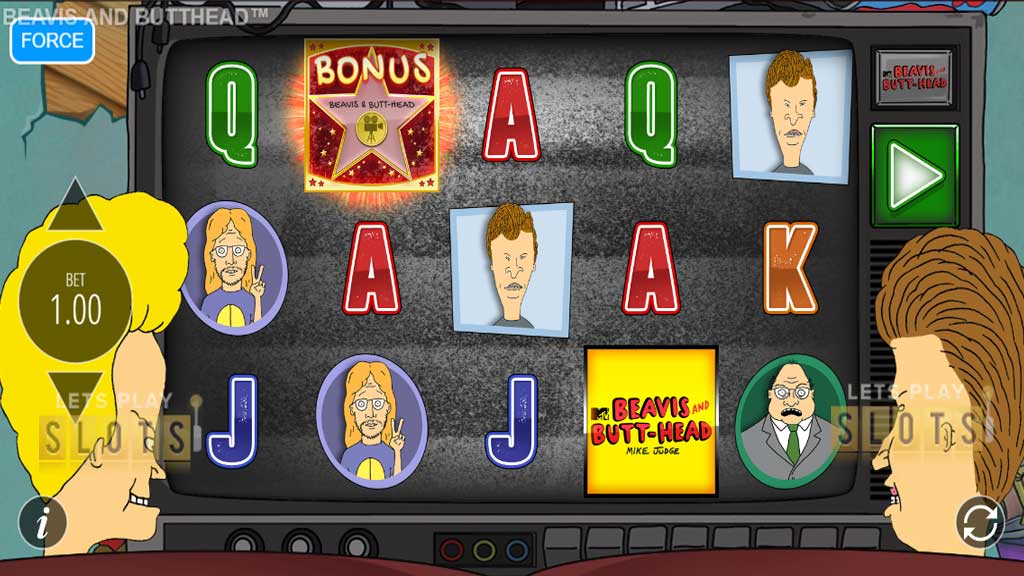 Best Casinos to Play Beavis and Butt-Head for Real Money :

Beavis and Butt-Head are sitting on the couch and watching TV, and the TV is actually your board with five reels. Sometimes one of the guys will change the channel, and whole lot of stuff will be going on when you click Spin.

The game is played on a standard 5×3 board with 20 fixed paylines, but you don’t have to pay a minimum of €0.20 to play as the minimum bet is €0.10. The maximum is whopping €500. The game is easy to set up as you just have to select your bet size and then click or tap the Spin button. 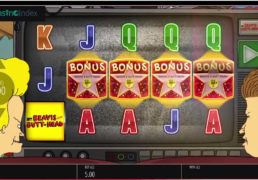 Other than the Hollywood Star Scatter and the paying Wild that can pay up to 500 coins, there are eight normal symbols and a super stacked Logo symbol. Beavis and Butt-Head are the two high-win symbols and you’ll get 300 coins for five-of-a-kind, but only 80 for four-of-a-kind. The other symbols also follow this rule and pay really low prizes for three-of-a-kind, so in this game you either need five of the same symbol or/and a multi-payline win. Or just trigger one of the bonus features and you won’t worry about the paytable prizes.

This game has incredible 14 bonus features. Eight of them are random reel modifiers, three are bonus rounds in which you get cash prizes, and three are free spins features. The random reel modifiers are Die Fly Die! that turns symbols into Wilds, Cornholio Wilds that produces stacked Wild reels, Colossal Couch Fishing that puts a 3×3 symbol on your board, So Nacho that puts mystery matching symbols on the reels, Butt Flambé that can trigger the bonus game, Some Like it Hot that produces big wins, Sofa Slugfest that removes symbols from reels and replaces them with new ones, and Change the Channel that changes the TV channel to reveal a win.

When you trigger the Bonus Stuff Kicks Ass feature, either through Butt Flambé or by landing at least three Hollywood Stars Scatters, you’ll get to randomly pick one of six true bonus features. Don’t Be a Buzzkill!, Customers Suck! and Just Deserts are all mini-games that look like episodes from the cartoon, and will give you cash prizes.

To B Or Not To B Free Spins gives 10 free spins with some extra Wilds, and you collect tokens to get some special features. Maxi Mart Free Spins can give you sticky Wilds, and The Great Cornholio Free Spins gives you a minimum of 2 stacked Wild reels on every spin, and collecting tokens can re-trigger this feature or trigger the Just Deserts bonus round. 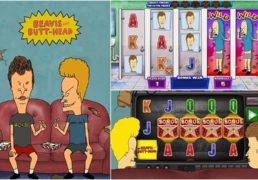 Theoretical return to player (RTP) of this slot game is 95.49%, which is average, and is expected for an officially licenced slot as well as a slot that’s so packed with bonus features. In the long run, you’re not expected to do too well in Beavis and Butt-Head slot, but the sheer amount of bonus features can produce a lot of cash in shorter playing sessions, as well as provide hours of fun. There are three free spins games here, and the variance is medium so the game is pleasant to play.

It’s no accident that Blueprint Gaming decided to do this slot, as they had great success with an equally ridiculous Ted slot. This is yet another addition to the comedy genre of slots, and that means tons of bonus features and lots of laughs. Do play this game for real money as only then will you appreciate all those bonus features. It’s just not the same in demo play. Find a good Blueprint Gaming casino and enjoy the game!

Hurray! There is a competition going between users of our site!
You have to do nothing, but browse out site, and win a daily prize. Click here to read more.
You current ranking:
Time Left: 22h 16m 16s