Blueprint Gaming is taking you to the depths of the seas in this Tridentia online video slot. Experience life under the water with mythological creatures of old, triggering free spins and feature round as you go. 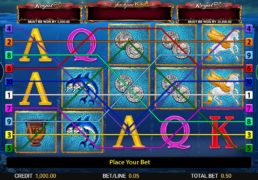 The underwater world is one that fits perfectly with slot gaming, and I’ve played several games with such themes. So, when Tridentia from Blueprint Gaming came along, I thought it would be a great chance to experience another one. I knew that it had progressive jackpots available to win, but I knew little more until I started playing it. Tridentia features Blueprint’s style of graphics and it brings together the underwater Greek god known as Triton with other mythological beings. It has a great backdrop of the ocean and a sunken temple, with one or two additional inbuilt features for you to enjoy. 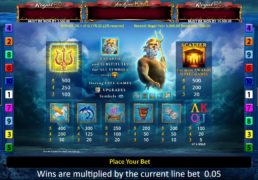 The main game offers up a five reel, three row interface, complete with 10 pay lines that you can bet on. These lines are not something that you’re able to customise, although speaking personally, I tend not to go below 10 pay lines in any slot game anyway. Your bet is easily changeable with the up and down arrows on the left-hand side of the reels, allowing you to place wagers anywhere between €0.10 and €100 per spin.

When you spin the reels, you’ll get to see the icons of the game come into view. These start out with the lower-paying card symbols of J, Q, K and A – all of which can pay out up to 100 times your bet. Then comes the symbol of the two silver coins, one of a Greek urn and another of a longboat. An icon of two dolphins comes next, while one of the Pegasus flying horse is also present. The trident symbol is the game’s highest paying standard addition, rewarding you with up to 500 times your stake.

Triton, the Greek god and messenger of the sea, works as the standard wild symbol. He will substitute for all other symbols and expand across a reel to cover it. The only exception to this is the slot’s scatter addition. The freespins round that exists within Tridentia is triggered by the scatter symbol – the Greek temple. Three or more of these appearing anywhere during base gameplay will trigger 12 freespins for you. If the wild symbol of Triton appears during freespins, he will not only expand, but also upgrade several standard icons to give you a better win.

I’m always happy to see progressive jackpots on offer, too. Tridentia features three of them, with the bonus game for these able to trigger randomly at any given time. You need to spin the reels of the bonus game to collect crowns, with the more crowns being collected giving you a bigger total bet multiplier. If you manage to enter the “Wheel King” round, you can get huge wins and even one of the progressives!

It’s always likely that I’m going to be grasped by a game that incorporates the Ancient Greece theme into it. Tridentia is a decent offering from Blueprint Gaming, featuring intriguing extra features and, of course, the impressive progressive jackpot possibilities. I like what the game already has available, but I’d also like to see one or two bonus rounds available to trigger, too.

Blueprint Gaming is taking you to the depths of the seas in this Tridentia online video slot. Experience life under the water with mythological creatures of old, triggering free spins and feature round as you go.

Hurray! There is a competition going between users of our site!
You have to do nothing, but browse out site, and win a daily prize. Click here to read more.
You current ranking:
Time Left: 1h 48m 27s