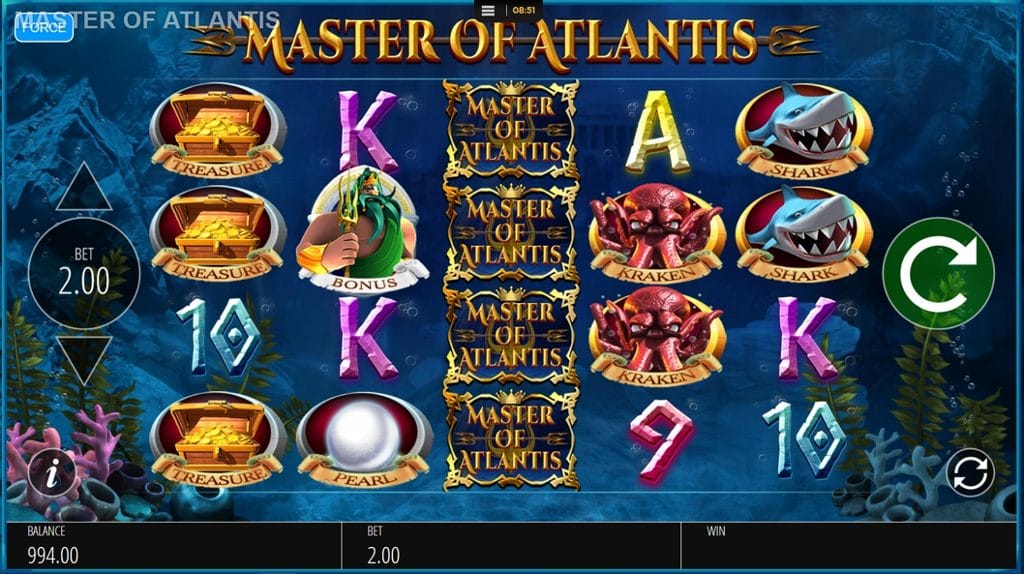 Master of Atlantis is a modern classic slot by Blueprint Gaming that offers a bare bones base game with a decent paytable and a free spins game which is more exciting than usual. You’ll be getting Scatter wins and Power spins when you trigger the feature!

Best Casinos to Play Master of Atlantis for Real Money :

Master of Atlantis took a well-known theme and changed it a bit so now it involves Poseidon, Kraken and a Shark, as well as some Pearls, so you got all these things combined in one game. The game is designed for classic slot players, and that’s immediately obvious. I’ve played it for a few hours so I believe I can see beyond the theme and offer an honest opinion about the game. It does have its pros and cons, and it’s not for everyone, some people will love it while others will stay away. 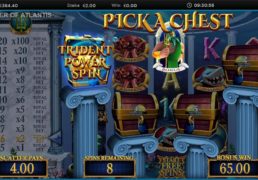 The game is played on a 5×4 board with 40 paylines, but it’s interesting that you pay 50 coins to play those 40 paylines, and the minimum bet per spin is €0.50 while the maximum is €100. The paytable wins are presented as cash values, and they change as you change your bet. The best prize in the paytable is 20x your bet, and two more symbols pay 10x while two more pay 8x. The six card symbols can also offer decent prizes, but only if you land five-of-a-kind. There’s also a Wild and a Scatter.

Trident Strike is a feature that can get triggered on any spin, and it will turn any symbol into a mystery symbol. This doesn’t happen very often and doesn’t have a major effect on the game so this is just one of those features that add little to the game but are still fun when they come along. 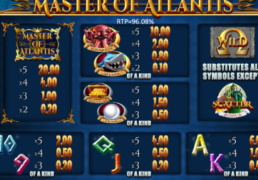 This is a typical classic slot as it has a free spins game that’s triggered when you land three Scatters. You’ll get one Trident Powerspin plus 5 regular free spins, and if you landed four or five Scatters you’d get one or two extra Trident Powerspins.

During the Trident Powerspin you’ll be spinning the reels once to try to get as many Trident Scatters as possible, and will win up to 100x your bet. During the regular free spins you’re still collecting Tridents and will be climbing up the ladder towards that maximum prize, and that’s the bonus feature you’re getting during the free spins. The spins themselves won’t amount to much when regular wins are concerned, and it’s all about those Tridents. You need to collect 20 to get the best prize. 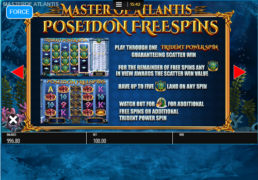 Theoretical return to player (RTP) is 96.03%, which is excellent for a classic slot, and if you’re a fan of this theme and of classic slots then Master of Atlantis is probably one of the better slots you can play when it comes to theoretical payout. The variance is medium and there’s no symbol that would offer a truly impressive prize, however, so most players will feel as if the game isn’t really paying well enough. During the base game it definitely isn’t, and your only hope is the free spins feature if you want to make money.

Your experience with Master of Atlantis will depend on how often do you trigger the free spins game and how lucky you are with those Trident Scatters, as the base game alone isn’t really capable of paying well enough to keep your balance positive. Theoretical payout is good but the game isn’t easy to play, and your bankroll might sink faster than expected. You do need to be patient enough to get to the free spins game, as that’s when the game will finally pay.

Master of Atlantis is a modern classic slot by Blueprint Gaming that offers a bare bones base game with a decent paytable and a free spins game which is more exciting than usual. You’ll be getting Scatter wins and Power spins when you trigger the feature!

Hurray! There is a competition going between users of our site!
You have to do nothing, but browse out site, and win a daily prize. Click here to read more.
You current ranking:
Time Left: 9h 47m 18s
Gambling is for 18+ though some countries may have other restrictions...Remember you should always Gamble Responsibly
We use cookies to ensure that we give you the best experience on our website. If you continue to use this site you agree to allow us to use cookies, in accordance with our Terms & Conditions.Agree & Close