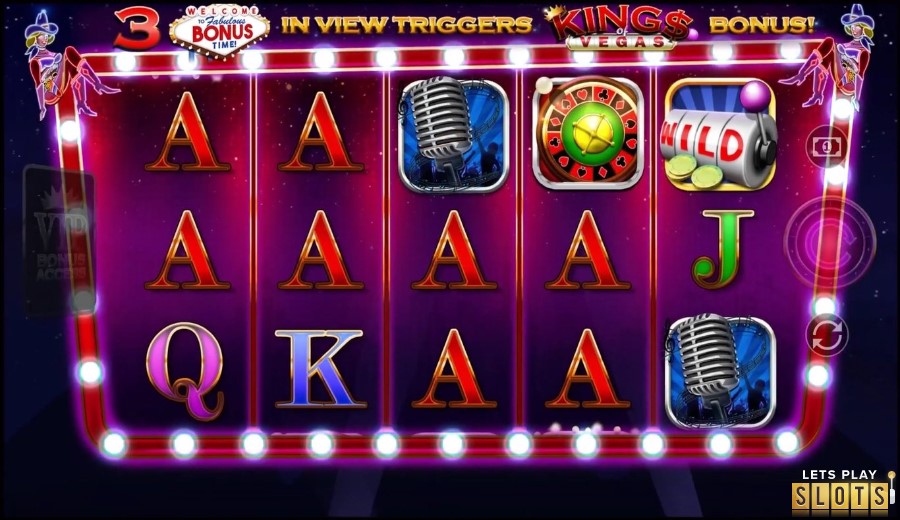 Kings of Vegas is a slot game from the Blueprint Gaming, which brings the Las Vegas theme to life. Released in December 2018, the reels include VIP Bonus Cards, up to 4 modifiers on any spin, a Reel Kicker feature and Super Nudges.

Best Casinos to Play Kings of Vegas for Real Money : 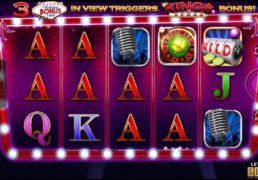 There are plenty of slot developers who have chosen to incorporate the Las Vegas theme into their games before, but when I saw the advertisement for Kings of Vegas from Blueprint Gaming, I knew that I had to try it straight away. I’m a big Blueprint fan anyway, so a new release is always a reason for me to get hyped up. But, once I played through Kings of Vegas, I knew that I had to share my thoughts on it with you all. The game itself consists of five reels and three rows, so everything is pretty standard there. You’ve got 20 pay lines to bet on as well, with intriguing special features to accompany your gameplay. Of course, Blueprint brings its trademark range of high-quality graphics to the game as well, with a standard medium variance level in play. 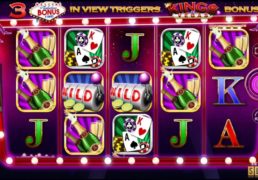 The symbols that you will see in this game are very much in keeping with what I always expect to see in a large number of slots these days. By this, I mean that it starts out with regular A, K, Q and J icons. These are joined by some more-thematic symbols, such as the bottle of champagne popping, the roulette wheel, the playing cards and poker chips – the kind of things you’d expect to see in Las Vegas.

You’re able to spin the reels with bets of anywhere between 20p and £100, and the base game also comes with four features that are randomly triggered. That’s besides the six additional bonus features that I’m going to speak about soon. The symbol depicting the slot reels is the game’s wild addition, replacing all other icons except for the bonus scatter.

The four randomly triggered base perks are the Super Nudge feature, Reel Kicker feature, King’s Re-Spin feature and Drinks on the House Re-Spin feature. Each of these can come into effect at any time, and any number of these can be active at any given time during base gameplay. 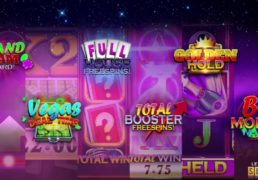 If you spin the Las Vegas sign with the word “Bonus” on it into view on reels one and three simultaneously, you trigger the VIP Bonus feature. This requires you to select from two cards, where you’ll have a 50/50 opportunity to collect a VIP card. This will upgrade your bonus feature in the bonus round, which triggers when the scatter shows up on reels one, three and five. You then roll a dice to trigger one of six different bonus features.

These are the Vegas Deal Time feature, giving you the chance to pick up to 5 of 12 boxes with rewards in them. The Full House Free Spins feature provides five freespins with randomly stacked mystery symbols. If you activate the Total Booster Spins, you receive 10 freespins with a double multiplier able to appear on the central reel. The Golden Hold Spins feature provides you with sticky win spins. There’s also a Big Money Wheel feature, presenting you with a prize wheel to spin and win cash prizes. Finally, the Grand Slam feature offers up the opportunity to win between 10 and 1,000 times your in-play stake.

I have to admit that I was quite overwhelmed by the sheer number of features that Kings of Vegas has. Yet, this is what helps it to stand out against other games of a similar theme. There’s just hours and hours of fun to be had with this Blueprint game, with the six bonus features and four random features ensuring that you never get bored. The developer’s high-quality graphics help it to stand out, too, offering up a vibrant and enticing slot overall.

Kings of Vegas is a slot game from the Blueprint Gaming, which brings the Las Vegas theme to life. Released in December 2018, the reels include VIP Bonus Cards, up to 4 modifiers on any spin, a Reel Kicker feature and Super Nudges.

Hurray! There is a competition going between users of our site!
You have to do nothing, but browse out site, and win a daily prize. Click here to read more.
You current ranking:
Time Left: 14h 43m 15s