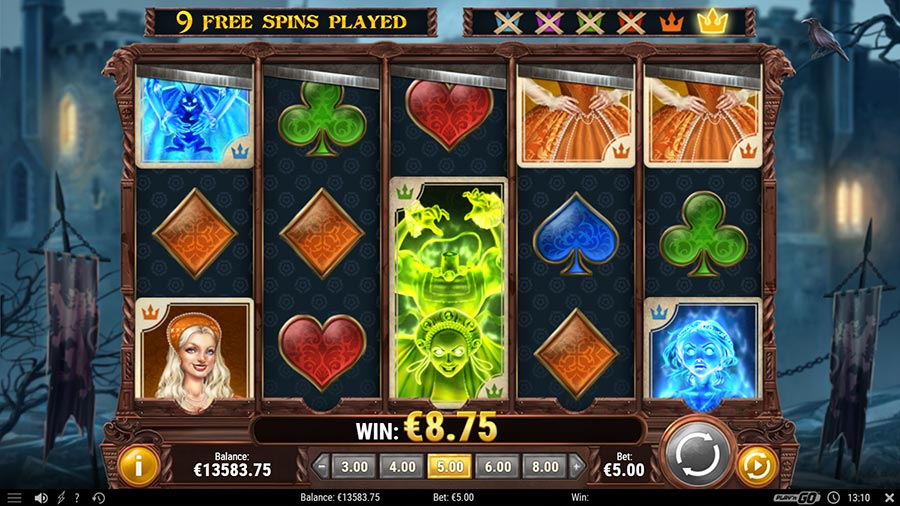 Battle Royal is a somewhat strange game by Play’n GO, released in December 2018, and themed around King Henry and his six wives. You can win up to 5000x your bet! 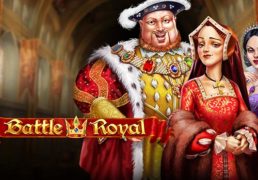 Battle Royal is, perhaps disappointingly, not themed around the very popular multiplayer shooter games such as Fortnite, but instead simply uses the battle royale as the basis for a pun. The game is themed around a king’s court, and it’s an incredible theme – it’s just that most players will initially be expecting something else. I certainly have, and after having played the game for a while, I believe I can give an honest review of this game.

The theme is just stunning, at least visually. Every gambler loves cards, and Battle Royal uses symbols that are two rows high that resemble playing cards, and this goes for King Henry and each of his six wives. There are also four card symbols which are barely noticeable. 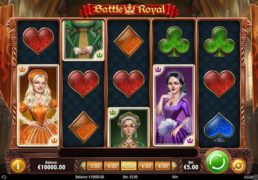 But then the theme takes a turn for the worse, as the wives of King Henry are constantly getting beheaded by a guillotine, and this is in fact the main game mechanic of Battle Royal, as during the free spins game you need to guess which wife will be the last one standing with her head still on. As it turns out, Battle Royal is a battle to survive King Henry’s love of beheading his wives.

The six Wives all pay roughly the same, from 15x to 30x your bet for five-of-a-kind, and Beheaded Wives all pay the same, 30x your bet. Card symbols pay almost nothing at all, as the maximum prize you can get is 3x your bet. King Henry is the paying Wild, with up to a 30x prize, and there’s also a Scatter that appears on first and last reel only.

When you land a Scatter on the first and last reel, you’ll trigger the bonus feature, and it’s only a question of which one you’ll get. You’ll click one Scatter to reveal your feature. Long Live the King! is a feature in which you’ll pick chests to reveal prizes. If you triggered the feature after the free spins, the optimum strategy is to escape as soon as you find the key. If you triggered the feature from the main game, the optimum strategy is to leave after picking four chests. 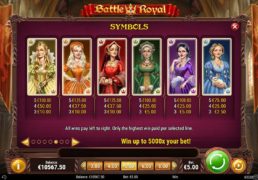 The free spins game is called Heads Will Roll, and you must choose which of Henry’s Wives will be the last one standing. On each spin, one of the guillotines above the reels will drop. If there’s a Wife on that reel, she will lose her head and that symbol will become Wild for the remainder of the free spins. Free spins continue until there’s only one Wife left, and if you guessed which one that will be, you get an additional cash prize.

After the last surviving Wife is known, her fate will be decided by the guillotine reels. Player will select a guillotine reel for the Wife, and one guillotine will then drop. If it’s the reel the Wife is on she will be beheaded like the rest and the Long Live the King bonus game will be triggered. If the Wife survives, the player is returned to the main game.

There’s also an additional bonus feature that can be triggered anytime during the main game, and it’s called Royal Flush. All the card symbols present on the reels will turn into the same symbol, which may lead to many low value winning paylines.

If you think beheading is fun, then this is the right game for you. Many players will feel uncomfortable playing this title, but those who can see the fun in beheading wives will have a blast. The game has a very decent theoretical return to player (RTP) of 96.56%, and the game can indeed pay well, especially during the free spins game where you get unlimited free spins with progressively more and more Wilds on your board. This is a good game by Play’n GO, albeit a bit strange.

Battle Royal is a somewhat strange game by Play’n GO, released in December 2018, and themed around King Henry and his six wives. You can win up to 5000x your bet!

Hurray! There is a competition going between users of our site!
You have to do nothing, but browse out site, and win a daily prize. Click here to read more.
You current ranking:
Time Left: 12h 39m 37s
Gambling is for 18+ though some countries may have other restrictions...Remember you should always Gamble Responsibly
We use cookies to ensure that we give you the best experience on our website. If you continue to use this site you agree to allow us to use cookies, in accordance with our Terms & Conditions.Agree & Close