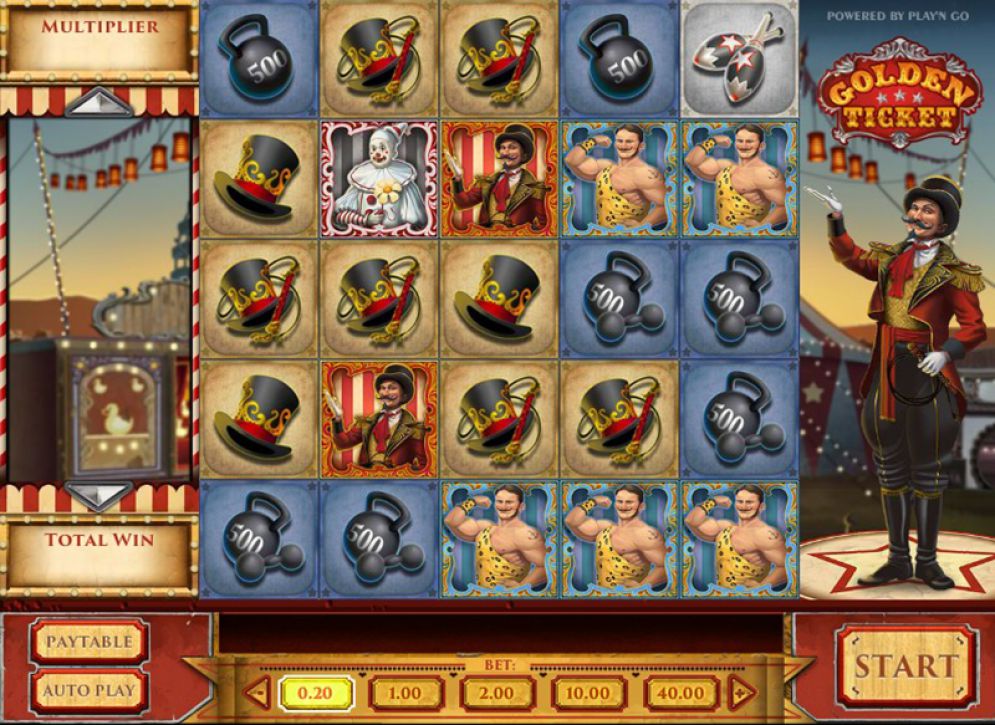 Golden Ticket is a circus themed falling blocks game by Play’n GO, and your goal is to trigger the bonus round where prizes are increased and where it’s possible to get ten-of-a-kind scattered win! 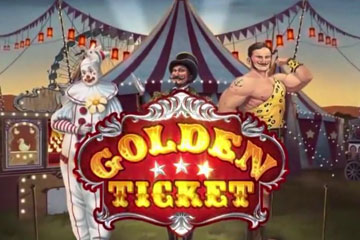 I have played Golden Ticket slot machine not knowing what to expect, but it turns out the title is just vague and doesn’t do this slot game justice. This is an excellent slot fame themed around a 19th century circus, and it’s lots of fun. So don’t let the generic title fool you, this is one of the better Play’n GO slots. Let’s have a look at the details.

First of all, it’s a falling blocks game in which you can get consecutive wins on the same spin, and your job is to clear the board or at least one particular reel. If you do, you’ll trigger the bonus round in which wins are increased and all symbols pay scattered.

Theoretical return to player (RTP) is 96.72%, and most players will find this good enough. Despite the good theoretical payout the game doesn’t feel like it’s paying well, because you need to connect several wins on the same spin to get a significant win, because the win multipliers are what you need to make money in this slot game. 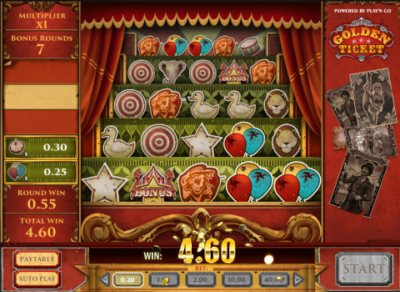 The main game in Golden Ticket is played on a 5×5 board with eight normal symbols and a Scatter, and one pr more reels will have the word BONUS written behind it. Any three symbols that are adjacent either horizontally or vertically will form a win, and will then disappear, letting the other blocks fall down. There won’t be new blocks that fall from above, so it’s possible to clear a reel entirely or to even clear the entire board, in which case you’ll be awarded with a 200 coin prize. If you clear the reel that has the word BONUS written behind it, you’ll enter the bonus game.

Every time you land a win, it will leave behind a Golden Ticket Wild that stays on the board until the end of the spin, and this will help greatly with forming new wins. Also, with each new win, the win multiplier is increased.

All eight symbols in the game have artwork, but the five low-paying symbols are designed in such a way that they don’t stand out too much. The three main symbols are three characters from the circus, and they pay a decent prize compared to low-paying symbols, and the paytable doesn’t have a symbol that would significantly stand out. 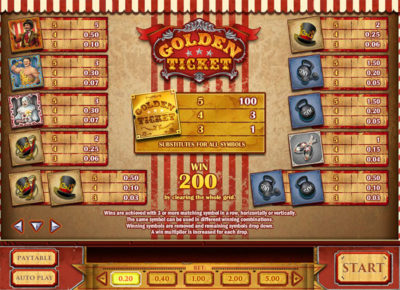 The bonus round consists of 10 free spins. Five or more matching symbols count as a win here, and five or more Bonus Scatters give additional free spins, up to a total of 20. The game is still played on a 5×5 board though the symbols are arranged in a shooting alley setup, and the symbols don’t need to be adjacent to form a win, all symbols pay Scattered so it’s enough to just have five of the same symbol and you get a win. It’s possible to get ten-of-a-kind win here, and you can win between 3000 and 7000 coins for that, depending on the symbol, which is huge compared to the maximum prize for five-of-a-kind in the main game which is 1000 coins.

Golden Ticket is a great slot to play on desktop, but it isn’t optimized for mobile devices so it’s difficult to enjoy it fully when playing on your phone as the symbols are too tiny. The free spins game isn’t difficult to trigger and you only need a little bit of luck, and then in the bonus game you can win up to 7000 coins if you land land five Clown symbols. Fans of falling blocks games will enjoy this one, not only because of the theme, but because of the rewarding free spins game.

Golden Ticket is a circus themed falling blocks game by Play’n GO, and your goal is to trigger the bonus round where prizes are increased and where it’s possible to get ten-of-a-kind scattered win!

Hurray! There is a competition going between users of our site!
You have to do nothing, but browse out site, and win a daily prize. Click here to read more.
You current ranking:
Time Left: 14h 6m 17s
Gambling is for 18+ though some countries may have other restrictions...Remember you should always Gamble Responsibly
We use cookies to ensure that we give you the best experience on our website. If you continue to use this site you agree to allow us to use cookies, in accordance with our Terms & Conditions.Agree & Close