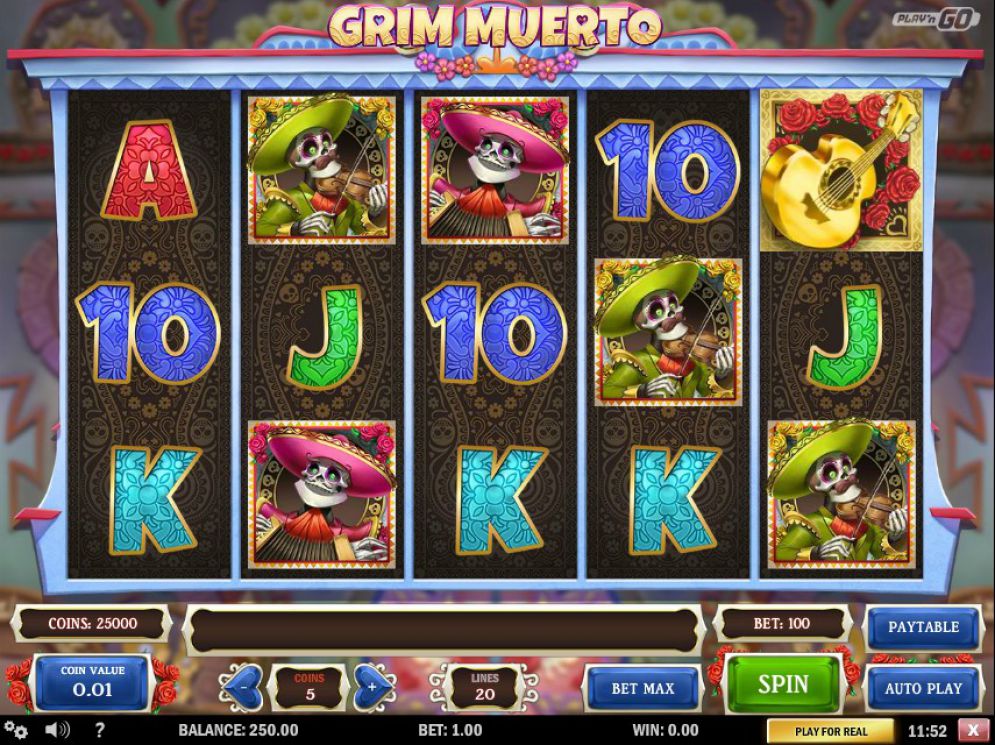 Grim Muerto is a visually impressive Play’n GO slot game from 2016, it is themed around dead mariachis and offers Extra Wilds, Expanding Wilds, and a free spins game where every Candle Scatter will give you 3 extra spins! 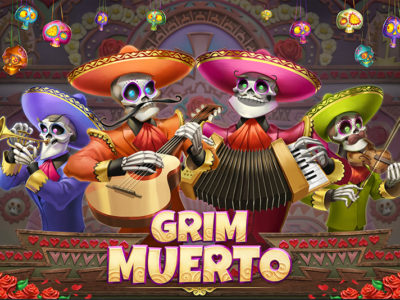 Grim Muerto is one of the slots I have been playing often recently, as I liked the theme and the bonus features, especially the free spins game, so I’ll give you my honest opinion about this slot machine. Grim Muerto is themed around dead mariachis, and the theme is just incredible, graphics are fantastic, and this is enough to make you play this slot game. The main symbols – the Mariachis – really stand out on the reels, and the game is very enjoyable to play.

The game is played on a 5×3 board with 20 fixed paylines, and since the minimum bet per payline is $0.01, the minimum bet per spin is $0.20 while the maximum is $100. The four Dead Mariachis are the main symbols in the paytable, and they pay from 350 to 700 coins for five-of-a-kind, and the five card symbols are worthless in comparison as they pay from 75 to 100 coins. Wild pays 1000 coins if you land all five of them. Prizes for four-of-a-kind of one of Mariachis are also decent, from 100 to 200 coins, so this isn’t one of those games in which only five-of-a-kind win actually counts. 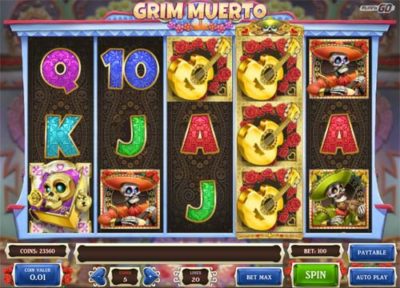 There are two types of Wilds in Grim Muerto slot game, one is the normal Wild and the other is the Extra Wild that only appears during the free spins game, where one of the Mariachis will become that Extra Wild, and in fact, the number of Wilds on your reel strips will more than double.

During the main game, Marco Siniestro feature is active. It highlights one random reel on every spin, and if you’re lucky enough to land a Wild on that reel, the Wild will expand to fill that entire reel. This can produce some big wins already in the main game, which is always a good thing. Theoretical return to player (RTP) is 96.00%, a decent number most players will be happy with. The slot game feels more rewarding because of those Wilds, Expanding Wilds and the rewarding free spins game, and variance is low to medium as the game pays often. 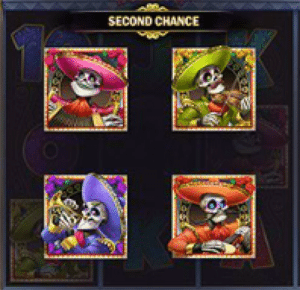 The Book is the Scatter, and it activtes the free spins game. You need three Scatters, but if you land two the Second Chance feature will get activated, and you’ll be presented with four Mariachis. If you pick the right one you get that third Scatter. However, what I’ve found is that the chance of picking the right one isn’t true, but is actually very slim. Rarely will you pick the right Mariachi. Mariachies can also give coin prizes here, up to 1000 coins.

Grim Muerto is one of best-looking slots out there, as the theme developed by Play’n GO is stunning. All fans of visually impressive slots will love this one, and everything else about this slot is good, too. The theoretical payout is good enough, variance will suit casual players who like to win often, and bonus features are fun and rewarding. There’s nothing not to like about Grim Muerto, at least not if you’re looking for this type of slot. This isn’t a high variance slot with an enormous max win, so if you’re looking for that type of slot then Grim Muerto wouldn’t be a good choice. For everyone else, it’s a superb choice.

Grim Muerto is a visually impressive Play’n GO slot game from 2016, it is themed around dead mariachis and offers Extra Wilds, Expanding Wilds, and a free spins game where every Candle Scatter will give you 3 extra spins!

Hurray! There is a competition going between users of our site!
You have to do nothing, but browse out site, and win a daily prize. Click here to read more.
You current ranking:
Time Left: 22h 2m 23s
Gambling is for 18+ though some countries may have other restrictions...Remember you should always Gamble Responsibly
We use cookies to ensure that we give you the best experience on our website. If you continue to use this site you agree to allow us to use cookies, in accordance with our Terms & Conditions.Agree & Close