Game of Gladiators is a Play’n GO slot game release from June 2019, and it’s a slot game in which you’ll choose your champion and will be fighting four Gladiators for coin prizes. The free spins game is unlimited as it ends when your queue of opponents reaches 12, and there are 5 more bonus features to look forward to!

Best Casinos to Play Game of Gladiators for Real Money : 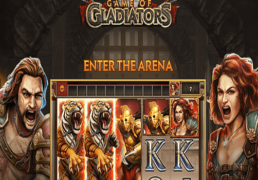 The game is played on a standard 5×3 board with 20 fixed paylines, and your bet per spin can range between €0.20 and €100. The game is easy to set up as you simply pick one of 16 preset bet sizes, and that’s it. Click Spin or Autoplay and wait for the free spins game, which does get triggered quite often, and enjoy those five base game bonus features that don’t come around as often.

The four gladiators are Scissor, Provocator, Murmilio and Retiarius, and they are paying symbols in the normal game, while in the bonus round you’ll actually be fighting against each one of them, starting with Retiarius as the easiest opponent. All four gladiators pay similar amounts, from 10x to 20x your bet for five-of-a-kind, which is decent. There are also four card symbols, and their prizes are insignificant. This is a good paytable that can deliver a nice amount of cash if you land a multi-payline win involving one of the Gladiators. 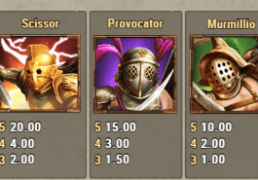 The main bonus feature is triggered when you land three Scatters on reels 1, 3 and 5, and the Scatters look like gates to the gladiator arena, which is a cool touch by Play’n GO. The free spins are unlimited, and you play until you lose or win the battle. During the feature all Wilds expand into Mega Wilds, which means they’re covering an entire reel, and you can win up to 5000x your bet in this feature.

You’ll choose your champion, either Spartacus, who will give you a feature retrigger, or Amazonia who will give you a bet multiplier between x20 and x100. The game is the same in both cases, as every Gladiator that lands on the reels will become your opponent, and every Champion will reduce the number of opponents. In short, the game ends when your queue of opponents rises to 12, and you earn coin prizes as you’re defeating them.

At the start of any regular spin, there are five Primus Features that can get triggered. Spear Attack will throw 3 to 6 spears towards the reels, making symbols Wild. Sword Attack will have the first reel replicate 2, 3 or 4 times. Net Attack will make one Gladiator stick and will then award a re-spin. Fame will pay out some cash prizes, and Enraged will add two full reel Mega Wilds to the board.

Theoretical return to player (RTP) of Game of Gladiators is 96.42%, which is more than good enough to take this slot game seriously. If you also take into account the interesting bonus features and the decent paytable, then this slot game should be played for real money. Variance seems to be medium, and this game can produce some mega wins. For a full board win of the best Gladiator you’d get 400x your bet, which is really something, and the free spins game has the potential to be very rewarding if your Champion is fighting well.

Game of Gladiators is not just a quality slot game, but probably the best one in the genre of gladiators, Spartans, Romans and other things from the rough time period. The bonus feature is elaborate and is very fun to play, and then you have those five Primus Features that make the base game more fun. This slot game can pay well, it has excellent graphics and a good theme, so it’s a full package. Play it for real money.

Game of Gladiators is a Play’n GO slot game release from June 2019, and it’s a slot game in which you’ll choose your champion and will be fighting four Gladiators for coin prizes. The free spins game is unlimited as it ends when your queue of opponents reaches 12, and there are 5 more bonus features to look forward to!

Hurray! There is a competition going between users of our site!
You have to do nothing, but browse out site, and win a daily prize. Click here to read more.
You current ranking:
Time Left: 5h 51m 33s