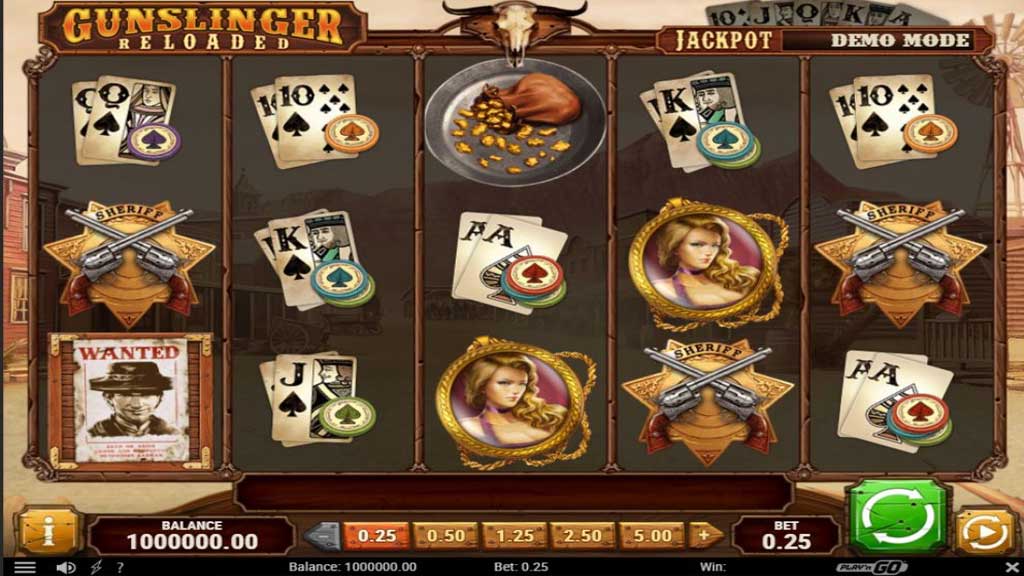 Gunslinger Reloaded is a Wild West themed slot by Play’n GO in which you’ll get some Bottle Free Spins, you’ll chase outlaws during the Bounty Hunt feature, and you can win the progressive jackpot in the Shoot the Cards game!

Gunslinger Reloaded is a 2018 sequel to the 2008 slot Gunslinger, which had a lot of innovative features, and now the Gunslinger returns as a shiny new slot game. I have played it immediately when it came out in 2018 as I know the old Gunslinger was great, and my honest opinion is that this slot is even better. Let’s go through the details and explain why is it so. 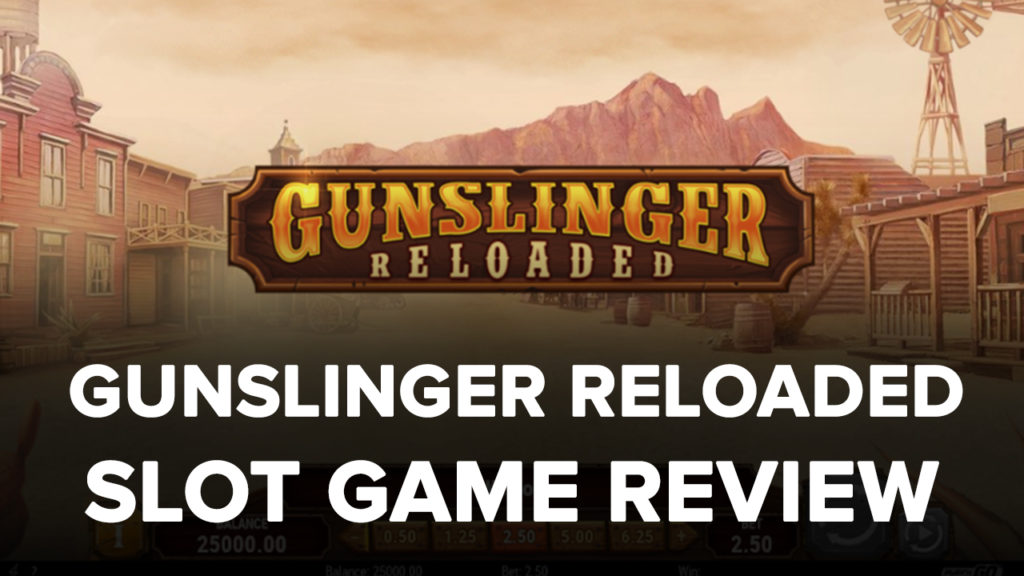 The game is played on a standard 5×3 board with 25 fixed paylines, and all the fun in this game comes from the bonus features. You will get a free spins game as well as a very fun bonus round during which you chase outlaws through the city, but the main game can be fun and rewarding as well. It is possible to win up to 5000x your bet. 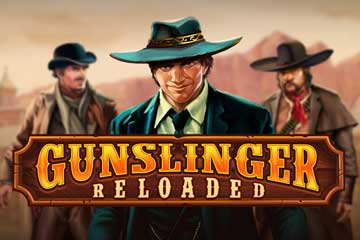 Theoretical return to player (RTP) is 96.67%, which is very good even if a good portion of it contributes to the progressive jackpot, 2.5% to be specific. The jackpot is local so different casinos will have a different jackpot, and wins are expected to be around the $60,000 mark. Variance of this slot is medium, perhaps a bit high, and when you also add the fact that larger bets have a larger chance to win the jackpot, then this isn’t a game which you can play specifically to try to win the jackpot. It’s best to just enjoy the game for what it is.

The five card symbols in the paytable are almost worthless as they pay from 5 to 15 coins for five-of-a-kind, and the high-value symbols pay progressively better with each symbol – 30, 50 and 100 coins for five-of-a-kind,. Horse Scatter pays 375 coins if you land all five. In addition to this, Wild is also a paying symbol, and it pays a 1000 coin prize if you land five of them. There are as many as four special symbols in this game, one is a Wild, and three are Scatters. 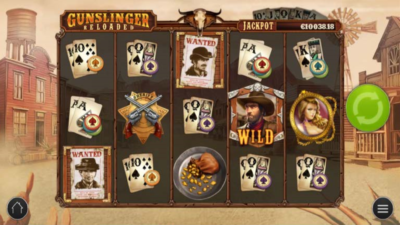 The free spins game is triggered when you land three Bottle Free Spin Scatters on reels 2, 3 and 4. You’ll be awarded with between 10 and 25 free spins and the prizes will be doubled during the feature. Wanted Poster Bonus Scatter triggers the second bonus game, and you need three of these on reels 1, 2 and 3. First you’ll choose a fugitive from the law and will then chase him through the city. Your prize for catching him can be up to 240x total bet, which is excellent value. The higher the reward multiplier for a certain outlaw, the higher the risk, so you can affect the outcome of this game greatly. Horse Scatter is not as fun as the other Scatters as it will simply pay a coin win.

There is another bonus feature, in which you can win a jackpot. During the main game you will be collecting wins, and some of these wins will be formed by one of the five card symbols in the paytable. As you do so, you will eventually collect all five cards., and you’ll trigger the Shoot the Cards game in which you can win the progressive jackpot. The greater your bet, the greater the chance of winning. You win the jackpot if all the cards have a Sheriff Star on them. 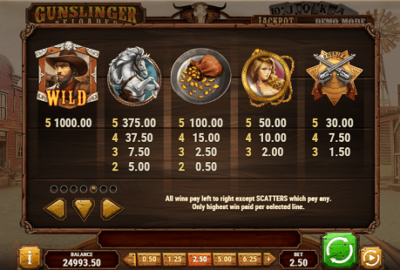 Gunslinger Reloaded is a worthy successor to the original title, and is in many ways better than Dead or Alive, the most famous title in the Wild West genre. Payout is excellent and so are the two bonus features plus the progressive jackpot game. Everything about this game is great and it’s one of the best titles Play’n GO ever released. It would be a mistake not to play it.

Gunslinger Reloaded is a Wild West themed slot by Play’n GO in which you’ll get some Bottle Free Spins, you’ll chase outlaws during the Bounty Hunt feature, and you can win the progressive jackpot in the Shoot the Cards game!

Hurray! There is a competition going between users of our site!
You have to do nothing, but browse out site, and win a daily prize. Click here to read more.
You current ranking:
Time Left: 23h 53m 7s
Gambling is for 18+ though some countries may have other restrictions...Remember you should always Gamble Responsibly
We use cookies to ensure that we give you the best experience on our website. If you continue to use this site you agree to allow us to use cookies, in accordance with our Terms & Conditions.Agree & Close