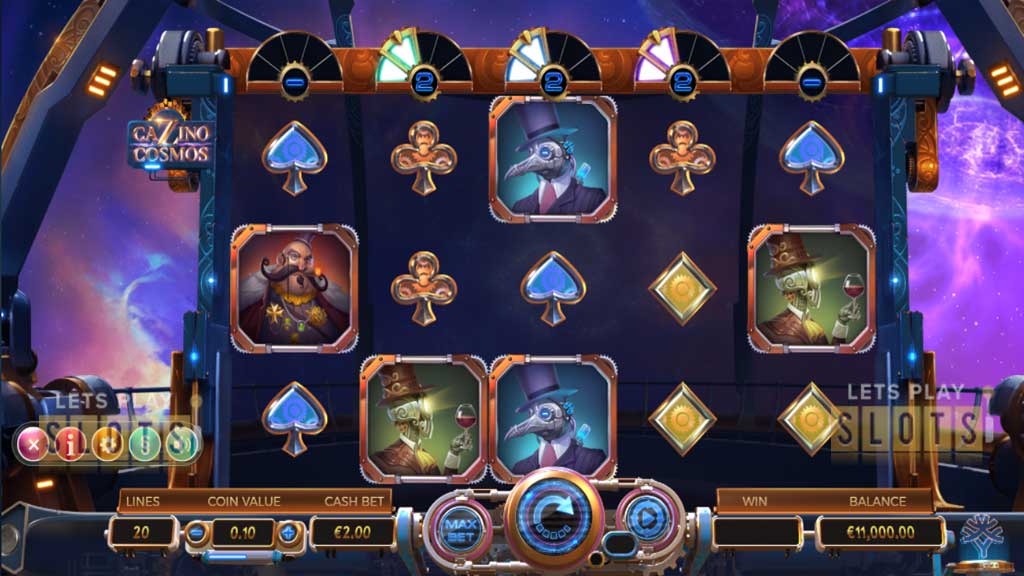 Ever wondered what it would be like to merge the themes of the cosmos and steampunk together? Well, wonder no more, because Cazino Cosmos by Yggdrasil Gaming is about to give you all the insight you need. With wild collection, free spins and more, this one is sure to entertain. 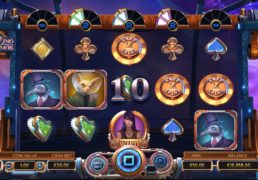 I can say with all honesty that I’m always thrilled when I know that Yggdrasil is going to be releasing a new slot. I just wasn’t prepared for the entertainment level that would come my way from the Cazino Cosmos slot game. From the moment that I loaded the game up, I knew it would be just my kind of slot offering – and I wasn’t disappointed with this thought, either. Free spins, wild collection, bonus perks. This game pretty much has it all. 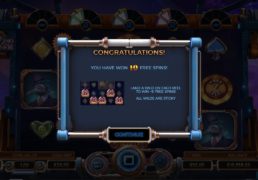 The layout of Cazino Cosmos is very much what you’d expect from a video slot – five reels and three rows. Yet, the design of it is very steampunk. It’s like a steampunk rocket has blasted off into outer space and you’re getting to play some slot games along the way. Across the reels, there’s a total of 20 pay lines for you to bet on. You’re able to customise your bet on these by using the plus and minus buttons at the bottom of the reels. It was nice for me to find that a €0.005 bet was possible as the lowest and €1 as the highest. This means a maximum wager of €20 per spin is possible in the game.

Visually, the reels feature some basic playing card suit symbols, although they have a very intriguing steampunk design printed on them. These are the lower-paying icons. They’re joined by four character symbols – the cat with a paw of cards, the mechanical man clutching his glass of wine, the Victorian-era plague doctor and the fat cat man with a huge moustache. He can pay out up to 2,000 times your wager. 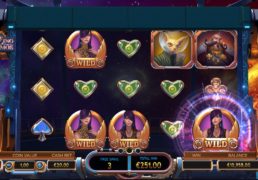 The bonus perks are really what make the slot come to life completely, though. The symbol of the woman is the game’s wild, which will substitute for all other regular symbols. You’ll also collect wilds, which you’ll see being added to your collection at the top of the reels. Each different reel has its own collection, and once you amass five wilds on a reel, it triggers a reel-specific bonus round.

Reel one has the Card Shot Free Spins feature where two random sticky wilds are added at the start. Reel 2 is the Hack Free Spins, giving you five extra freespins on top of the initial 10. Reel three provides the Zero Gravity round, where each reel is nudged up or down one position if it reveals a wild. A collection on reel four triggers the Mutation feature, which means that a random high pay symbol may transform into a wild on each spin. Finally, the fifth reel is responsible for Expansion. All wilds appear in double stacks on the reels during this.

There’s also the standard free spins round, which triggers when you spin three or more of the roulette wheel scatter into view anywhere. Up to 20 freespins can be won from this and sticky wilds are present throughout.

I can’t say enough positive things about Cazino Cosmos, because everything in the slot stands out perfectly to me. The bonus features compliment the overall theme and, of course, Yggdrasil has integrated impressive graphics and smooth gameplay into it as a standard. This one is highly recommended!

Ever wondered what it would be like to merge the themes of the cosmos and steampunk together? Well, wonder no more, because Cazino Cosmos by Yggdrasil Gaming is about to give you all the insight you need. With wild collection, free spins and more, this one is sure to entertain.

Hurray! There is a competition going between users of our site!
You have to do nothing, but browse out site, and win a daily prize. Click here to read more.
You current ranking:
Time Left: 19h 11m 36s