Dwarf Mine is an Yggdrasil slot game from March 2019 that features an expanding board that can grow to 5×7 with 16,807 ways to win, and the game hides the best symbols from you until you collect enough Collectible Symbols to trigger the special game with Super High Paying Symbols!

Best Casinos to Play Dwarf Mine for Real Money :

Dwarf Mine has innovative game mechanics, and I’ve learned to like how this game plays during several hours of test play. The game is a bit more difficult to play than you’d expect when you look at the features, but both you and the Dwarf beside your reels need to work hard to make this game pay! The game is designed to be played in long playing sessions, as after all, it does feature collectible symbols, and you need time to collect enough of them. 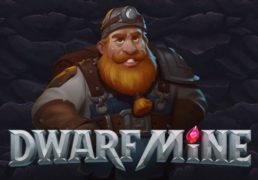 This slot game starts on a 5×4 board with 1024 ways to win, but this can increase all the way to 16,807 as you keep triggering the features of the game. You form wins by landing symbols on adjacent reels starting from reel 1, and if you land more than one symbol on a reel then you’ll multiply the win according to the number of extra symbols. You can choose a bet between €0.10 to €125 per spin, and the exact number of ways to win is always shown at the bottom left part of the board.

The game has three sets of symbols, and two appear in the base game while the third one is only available when you trigger the Collection Free Spins. The four mid-value symbols pay from 20 to 30 coins for five-of-a-kind, while the four card suit symbols only pay 15 coins at best. 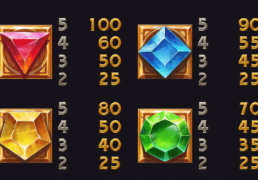 Each Bonus Symbol that lands expands the reels by 1 row, and the reels can be expanded by up to 3 rows, so the biggest board you can have is 5×7. Most of the time, you’ll land one Bonus Symbol, which will expand the board by one row, revealing another row of symbols, which will then likely form some new winning paylines which you weren’t expecting. Then the game goes back to a 5×4 board for the next spin. When you land three Bonus Symbols on the same spin, you’ll receive 10 Regular Free Spins that always take place on a fully expanded 5×7 board.

There are four collectible symbols, Gems of different colors, and they only appear on the three expanded reels during the base game. Whenever you collect 5 of each symbol you’ll receive 5 Collection Free Spins. These also take place on a fully expanded 5×7 board, and feature special Super High Paying Symbols that only appear during this feature. They are four symbols, with prizes of 100, 90, 80 and 70 coins for five-of-a-kind respectively. This will be your only chance to win big in this slot game, as the paytable without these symbols isn’t that generous.

Dwarf Mine has a theoretical return to player (RTP) of 96.80%, though the game doesn’t seem as if it’s paying that well, since you don’t have access to the best symbols most of the time. But if you look at your bankroll you’ll likely see that you’re doing well even if you didn’t think you won that much. This is what you get with a high RTP such as this one. 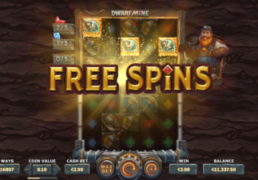 The main thing about this game are in fact the Collectible Symbols, and you’ll collect one often when you land a Bonus symbol and therefore reveal a hidden row where a Collectible Symbol could be hiding. Once you collect enough of these symbols, the game will loosen up as you’ll be close to triggering 5 free spins with four different symbols. It just takes a bit of patience, but this game is definitely worth playing and is definitely worth playing for real money.

Dwarf Mine is an Yggdrasil slot game from March 2019 that features an expanding board that can grow to 5×7 with 16,807 ways to win, and the game hides the best symbols from you until you collect enough Collectible Symbols to trigger the special game with Super High Paying Symbols!

Hurray! There is a competition going between users of our site!
You have to do nothing, but browse out site, and win a daily prize. Click here to read more.
You current ranking:
Time Left: 10h 51m 14s
Gambling is for 18+ though some countries may have other restrictions...Remember you should always Gamble Responsibly
We use cookies to ensure that we give you the best experience on our website. If you continue to use this site you agree to allow us to use cookies, in accordance with our Terms & Conditions.Agree & Close