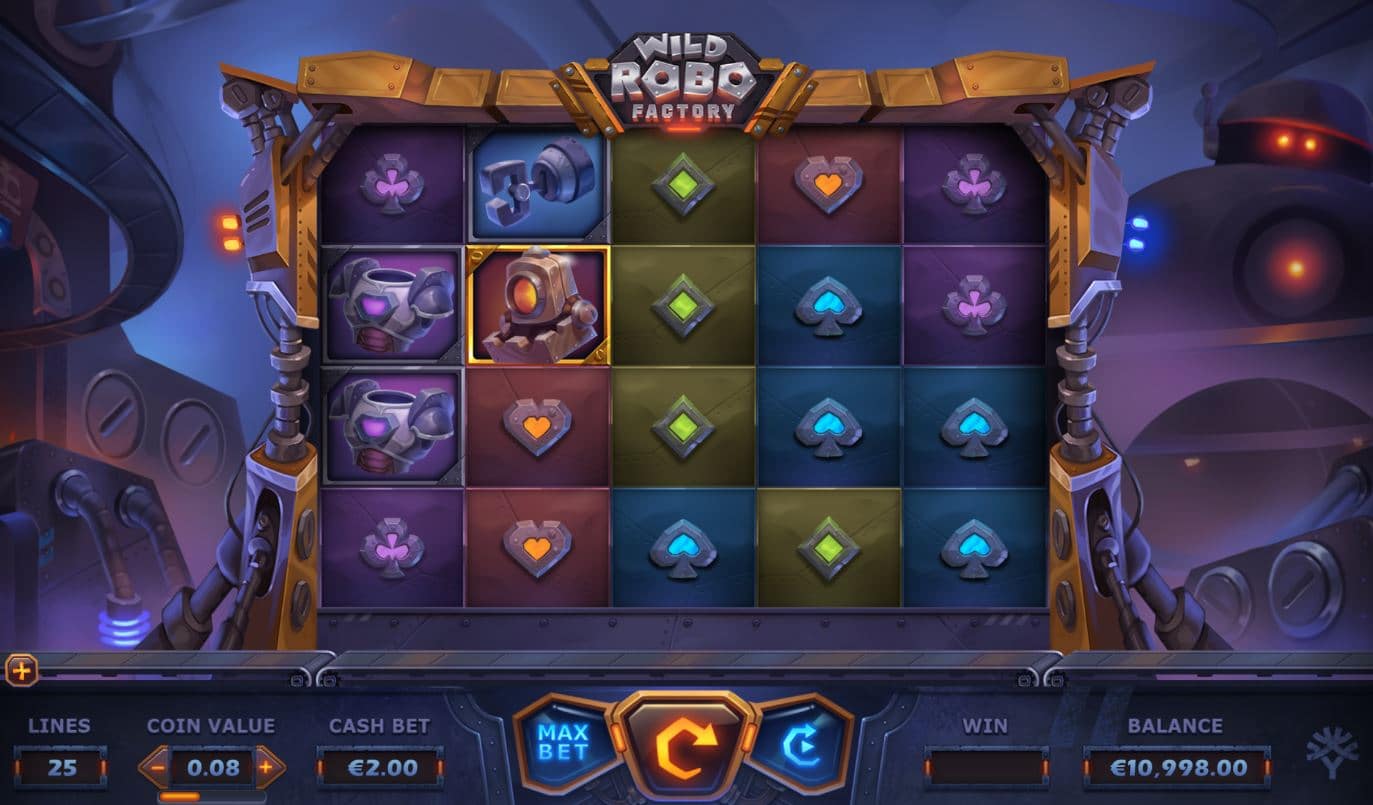 Wild Robo Factory is a fun and innovative Yggdrasil slot game from June 2019, and it is a normal 5×4 slot game but with a conveyor belt that carries various Wild Robos. This is what’s responsible for most bonus features in the game, and there are plenty.

Although it may seem that this is a falling blocks game with re-spins as the symbols do look like falling blocks, in fact it’s just your usual slot game played on a 5×4 board. It has 25 paylines that are fixed, and it’s interesting that your bet per spin can be as low as €0.05 for all 25 paylines. The maximum allowed bet is €125 per spin. 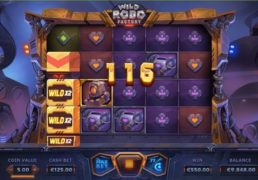 The paytable consists of eight symbols divided into two groups of four, and the four low-win card symbols all pay the same, 50 coins for five-of-a-kind, 10 coins for four-of-a-kind and 5 coins for three-of-a-kind. This is very low and basically you can only win 2x your bet if you land a full winning payline, while in other cases you’ll simply get a fraction of your bet back.

The four high-win symbols range in prizes from 120 to 375 coins for five-of-a-kind, which again isn’t too much as the best prize is only 15x your bet, so this is a game in which the paytable can’t produce big wins on its own. This is a game in which Wilds and other extra features will be producing the biggest wins. Fortunately, there are plenty of these. 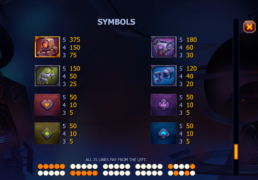 There is a conveyor belt under the reels and you barely notice it until it starts carrying Robos. Most commonly, the belt will be carrying a single Wild, though there are also Robo Wilds that are two, three and four symbols high. These also exist in a x2 multiplier version. There are also Twin Wild Robos that are two, three or four symbols high and are two reels wide. Wild Pattern Robo is made up of four Wild Robos in an irregular pattern.

A low-win symbol can randomly transform itself into a high-win symbol. Also, Robo Respins are triggered randomly in the base game, and the respins continue until the last Robo reaches reel 1.

When you land three, four or five Free Spin symbols, you’ll win 5, 10 or 15 Robos respectively. The free spins mode ends when the player runs out of Robos, and whenever a Robo’s last Wild symbol reaches the leftmost reel the number of Robos on the board is decreased by one.

System Overload is a feature that’s triggered randomly during the free spins game. It will reverse the conveyor belt, so the Robos will be moving back instead of forward, and you’ll get many more free spins. This is the best thing that can happen in the game, and it’s totally random so you need to play the game for a while to see it.

Wild Robo Factory has a theoretical RTP of 96.40%, which is just right for a slot game of this type, and is good enough although, of course, there are slots that pay better. But what matters is how does the game play, and this one is a standard Yggdrasil game that plays very well and you get the feeling that you’ll always be in positive. And that’s even before you start triggering the best bonus features.

Wild Robo Factory is an excellent game that can both pay well in terms of big wins and keep you in the game by delivering small wins frequently. It’s very easy to play, and it gets even easier as you can play it for a very small bet per spin. What’s great about these traveling Wilds is that they’ll always reach reel 1 where they’ll have the biggest impact. Find a good Yggdrasil casino and play this superb game for real money.

Wild Robo Factory is a fun and innovative Yggdrasil slot game from June 2019, and it is a normal 5×4 slot game but with a conveyor belt that carries various Wild Robos. This is what’s responsible for most bonus features in the game, and there are plenty.

Hurray! There is a competition going between users of our site!
You have to do nothing, but browse out site, and win a daily prize. Click here to read more.
You current ranking:
Time Left: 4h 49m 32s
Gambling is for 18+ though some countries may have other restrictions...Remember you should always Gamble Responsibly
We use cookies to ensure that we give you the best experience on our website. If you continue to use this site you agree to allow us to use cookies, in accordance with our Terms & Conditions.Agree & Close