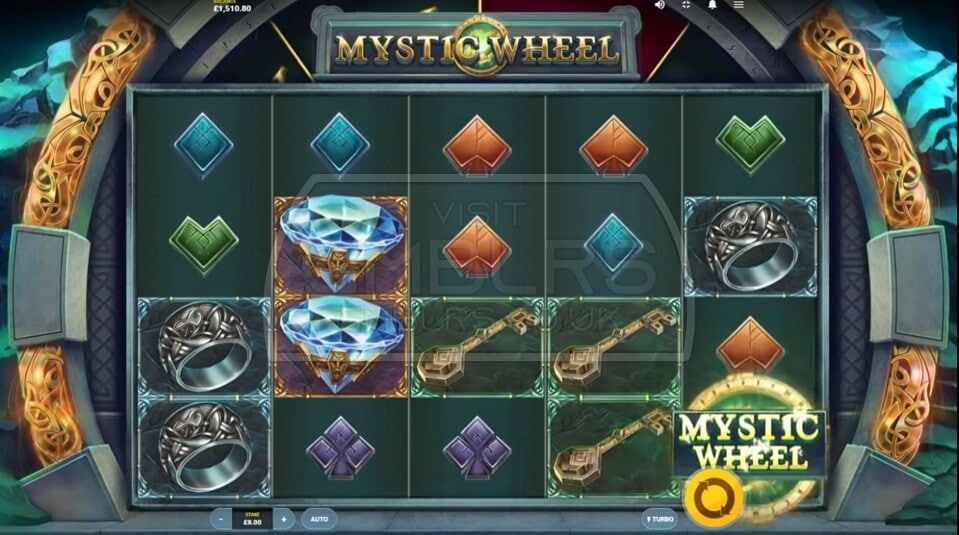 Mystic Wheel is a wheel of fortune slot game in which you can win up to 10,000x your bet and 77 Mystic Wheel Spins. The game has high variance and a decent paytable, and triggering the Mystic Wheel feature is the one and only important thing in this game. 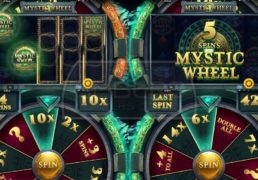 Mystic Wheel is played on a large 5×4 board and it has 30 fixed paylines, but you only pay 20 coins to play those paylines so the minimum bet per spin is €0.20 while the maximum is capped at €10, which is rather low. The game has a Turbo feature and an Autoplay feature, and it’s best to use both of them together as the main objective of this game is to land those three Scatters, and the base game is rather uneventful most of the time.

The game has a total of eight symbols, nine if we count the Scatter, and there are no Wilds in this game. The four card symbols don’t pay too well, as usual, and you can basically only hope to get your stake back or perhaps double it if you land five-of-a-kind. The four high-win symbols pay much better, but only in case of top three. The best symbol, Diamond, will pay 300 coins for five-of-a-kind and half that for four-of-a-kind, while the next two symbols pay up to 165 and 120 coins respectively. So, the game has one powerful symbol that beats all others. 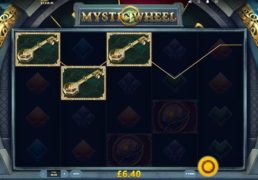 Three or more Mystic Wheel symbols that land anywhere on your reels will trigger the Mystic Wheel, and you get one spin awarded for each symbol. That means you’ll get a minimum of three and a maximum of five initial spins, and more can be won on the Wheel – up to 77, in theory.

Your bet per spin is the starting value for the Mystic Wheel, and then you can multiply that when the Wheel lands on one of the Win Multiplier segments. In essence, you need to land at least two good Win Multipliers during your three spins to get a prize of reasonable size, otherwise you might be left with a very low win.

Theoretical return to player (RTP) is 96.16%, which is good enough and is in line with modern standards. The game definitely does pay well in theory, but in practice many players will be missing the free spins game which is absent from this slot, especially as the Mystic Wheel feature isn’t that rewarding every time. Variance is a bit high in this slot game, and it’s a bit difficult to play – until you finally get that mega win.

The game does offer the opportunity to win big, but it’s hidden behind high variance. Most of the time when you trigger the Mystic Wheel you’ll get a small prize or an average one, and will need to spin the Wheel a lot before you see it pay a mega win. There’s nothing else to look forward to in this game as it doesn’t have any other features whatsoever, not even a Wild. If you really enjoy wheel of fortune games, give Mystic Wheel a try, it’s a decent game for fans of the genre. Players who don’t enjoy wheels of fortune or don’t like high variance slots will probably be disappointed. The game can pay big, though, so it’s a good choice of a game to play for real money.

Mystic Wheel is a wheel of fortune slot game in which you can win up to 10,000x your bet and 77 Mystic Wheel Spins. The game has high variance and a decent paytable, and triggering the Mystic Wheel feature is the one and only important thing in this game.

Hurray! There is a competition going between users of our site!
You have to do nothing, but browse out site, and win a daily prize. Click here to read more.
You current ranking:
Time Left: 10h 55m 22s
Gambling is for 18+ though some countries may have other restrictions...Remember you should always Gamble Responsibly
We use cookies to ensure that we give you the best experience on our website. If you continue to use this site you agree to allow us to use cookies, in accordance with our Terms & Conditions.Agree & Close