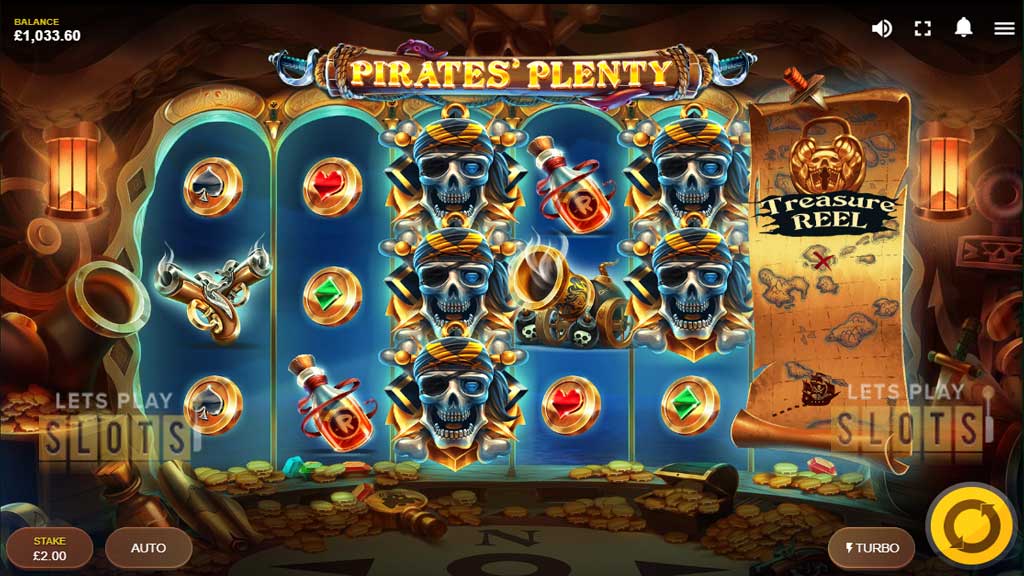 Pirates’ Plenty Battle for Gold is a Red Tiger slot game released in August 2019, and it has an excellent pirate theme and plenty of bonuses and features. This is a high variance slot with a powerful Jolly Roger symbol and a very fun bonus game. The board can expand to 5×4 and you can get plenty of Wilds! Maximum win per spin is 5,000x your bet.

This 5×3 game has 20 fixed paylines so they’re not selectable and you must pay at least €0.20 or €0.01 per payline to play the game. You get 10 more lines when you unlock the Wild Island Row feature and then your board becomes 5×4. The maximum bet in this slot is €20 per spin, which is €1 per payline. It’s very easy to select your bet as you choose from 11 preset values. Everything is very simple, and this game is fully mobile responsive so you can enjoy it on your mobile device as well. 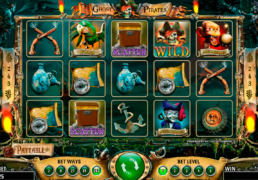 Graphics are just superb, and any pirate fan will enjoy this game a lot. All the usual pirate symbols are here, such as the Cannon, Gun, Hat and Poison Bottle. All the symbols look really nice, and the background of the game looks great as well.

Jolly Roger is, of course, the highest-paying symbol. It pays 600 coins for five-of-a-kind, and it’s by far the best symbol in the game and the one because of which it’s possible to win a lot of money on Pirates’ Plenty Battle for Gold. The other four high-win symbols all pay similar prizes, from 180 to 90 coins for five-of-a-kind, while the four card suit symbols pay from 45 to 24 coins.

This is a paytable which is capable of giving some small wins, perhaps some good ones, but to really get ahead of the game you’ll need the Jolly Roger. Wild Monkey is the other symbol you’ll like to see often as he’s a Wild and he can appear on any spin except during Battle Spins. The Monkey steals low-paying symbols and trigger a re-spin with high-win symbols only.

Collect Map symbols to unlock the Wild Island Row, in which case the board will grow to 5×4 with 30 paylines. Once the Wild Island Row is unlocked, it remains open for all future spins made with the same bet per spin. Also, Wilds will be able to land on the reels without a specific trigger.

Three Scatters trigger Battle Spins, where the Fire symbol will award Bonus Spins and Locked Wilds. During the Battle Spins, Captain Blackbeard throws Wild Bombs at the reels. Wilds can have a win multiplier up to x5, so this is how wins get so big in this slot game. Without the multiplier, the wins can’t be that big, though 1,000x your bet is still great. 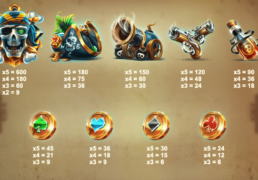 The theoretical return to player (RTP) of this slot game is 95.72%, which is in line with modern expectations from a videoslot, and variance is high so people might be drawn to this slot because of that. It’s possible to win over 5,000x your bet in Pirates’ Plenty Battle for Gold. Add to this a very fun and exciting free spins feature with lots of bonuses, and this slot game becomes very attractive to play. You should try it out for real money.

This is a fun slot for recreational players, and it’s worth playing for real money because of the bonuses. You’ll have fun with Pirates’ Plenty Battle for Gold and could make some nice money as this is a high variance game that can really pay well. In short, this game is definitely recommended and you’ll have lots of fun. Find the game in any Red Tiger online casino.

Pirates’ Plenty Battle for Gold is a Red Tiger slot game released in August 2019, and it has an excellent pirate theme and plenty of bonuses and features. This is a high variance slot with a powerful Jolly Roger symbol and a very fun bonus game. The board can expand to 5×4 and you can get plenty of Wilds! Maximum win per spin is 5,000x your bet.

Hurray! There is a competition going between users of our site!
You have to do nothing, but browse out site, and win a daily prize. Click here to read more.
You current ranking:
Time Left: 1h 17m 21s