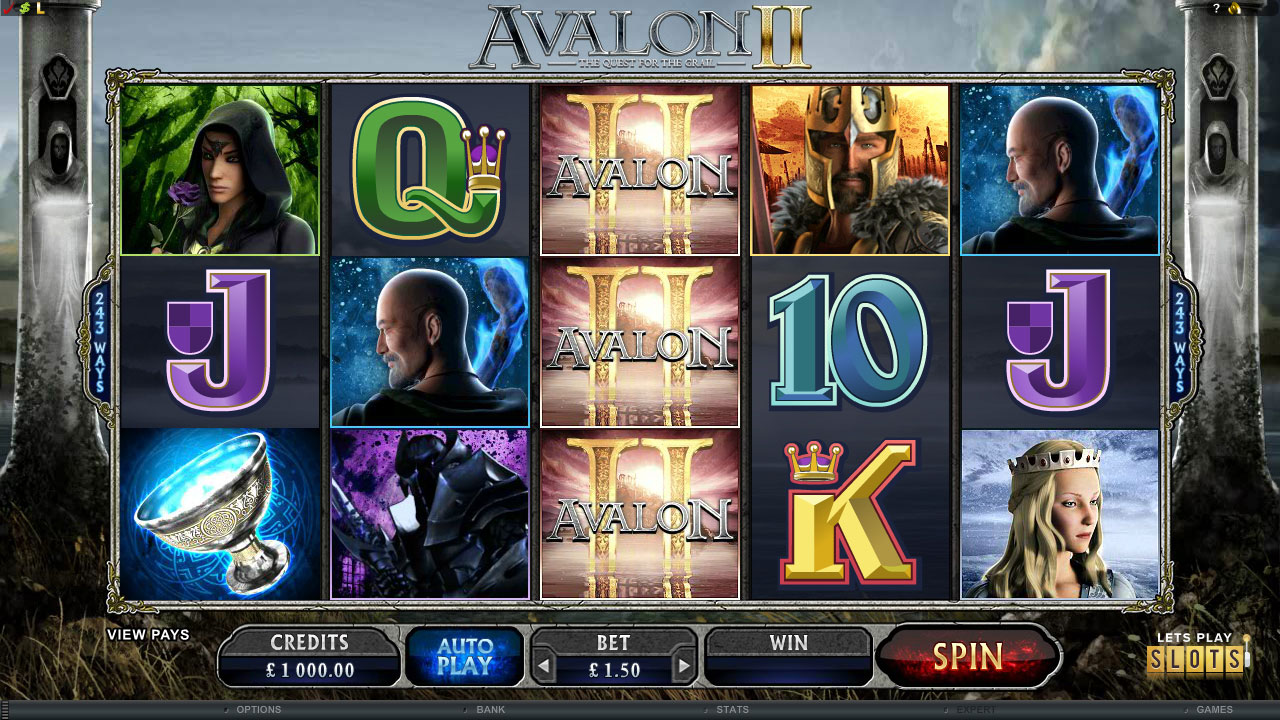 Avalon II is a 2014 sequel to the 2006 blockbuster, and this game will take you on a quest to recovert the Holy Grail through eight different bonus games! Win up to 480,000 coins if you find the Grail! 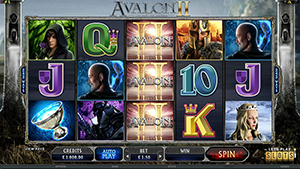 This game will take you back to magical medieval times of King Arthur, Merlin the Wizard and the others, and you’ll go on a quest for Holy Grail. Theoretical return to player (RTP) of Avalon II isn’t the same at all casinos, as the game is configurable by the casino and the RTP can range between 96.00% and 97.00%. Variance is medium, and this isn’t a slot game that’s challenging to play, just pure fun as you progress through bonus round levels. 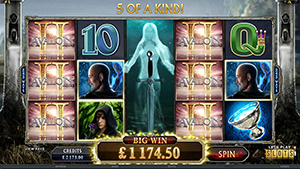 Main game of Avalon II is more or less standard, as it’s played on a 5×3 board and 243 ways to win, which means it’s enough to have symbols on adjacent reels in order to connect a winning payline. There are ten symbols in the paytable, and five of them are low-paying card symbols. Then there is the main cast of characters: King Arthur, Merlin, Guinever, Morgana the Witch and the Black Knight. All of these pay well but appear rarely on the reels.

In addition to normal symbols, Lady of the Lake is a Wild symbol that only appears on reel 3 and it’s an expanding Wild that can fill the entire reel. Randomly, in the base game, Merlin will appear with a nice animation and will provide some extra prizes. It will be a win multiplier that will either multiply either the total win or the total bet.

Avalon II has one of the most elaborate bonus rounds you’ll find in slot games. The bonus round in Avalon II is actually an entire quest that consists of eight separate games that come one after another. Holy Grail is the Scatter symbol and you’ll get a small cash prize for landing two, but for landing three you’ll trigger the bonus round. You can play up to eight quests, and after each one you’ll be forced to choose between two choices of a path. 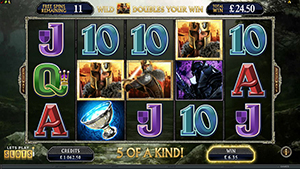 Lake of Legend is a quest in which you must forge Excalibur from six fragments by rolling a number associated with a fragment at least once in 10 dice rolls attempts. If you’re successful, you’ll get a 15x prize plus 6x prizes for each remaining roll. You can only progress to the second quest if you forge the Excalibur. Misty Vale is the second quest, and it’s a free spins game, you’ll get 15 free spins and will be able to choose a character that will be an extra Wild with a x2 win multiplier.

After the second quest you must choose a path, you’ll either go to Whispering Woods or Forest Falls. Whispering Woods is a pick and choose bonus game in which you can win random win multipliers. Forest Falls is a free spins game with 20 free spins, and Trailing Wilds. After this quest you’ll go to Dusky Moors, which is a memory game with 12 cards, and you must match two Helms. The next stop is Morgan’s Keep with 20 free spins with Rolling Reels, and once a win is formed the symbols involved explode, and are replaced by new ones from above.

In the Hall of Shadows you will have to defeat the Black Knight to recover the Holy Grail. There are five fight rounds, each with three fight sequences to choose from, and each hides a multiplier win. Finally, when you come back to Isle of Avalon, you’ll spin four bonus wheels to form a bonus multiplier value.

I felt Avalon II is just as much of a computer game as it is a slot game, and the bonus round is interesting in itself, even without the money involved. All those prizes and multipliers, of course, make the quest for the Holy Grail even more fun! This is one of the best bonus rounds of all slots.

Avalon II is one of the best games ever made, because of those bonus rounds and the quest gameplay, and the medieval theme fits this slot perfectly. Everything about this slot game is great, from theoretical payout to relatively well paying main game, fantastic graphics and sounds. Every player should play this slot at least once as it’s a true blockbuster by Microgaming.

Avalon II is a 2014 sequel to the 2006 blockbuster, and this game will take you on a quest to recovert the Holy Grail through eight different bonus games! Win up to 480,000 coins if you find the Grail!

Hurray! There is a competition going between users of our site!
You have to do nothing, but browse out site, and win a daily prize. Click here to read more.
You current ranking:
Time Left: 1h 2m 40s